Asylum seeker: ‘I was sent to Mount Trenchard as punishment’ 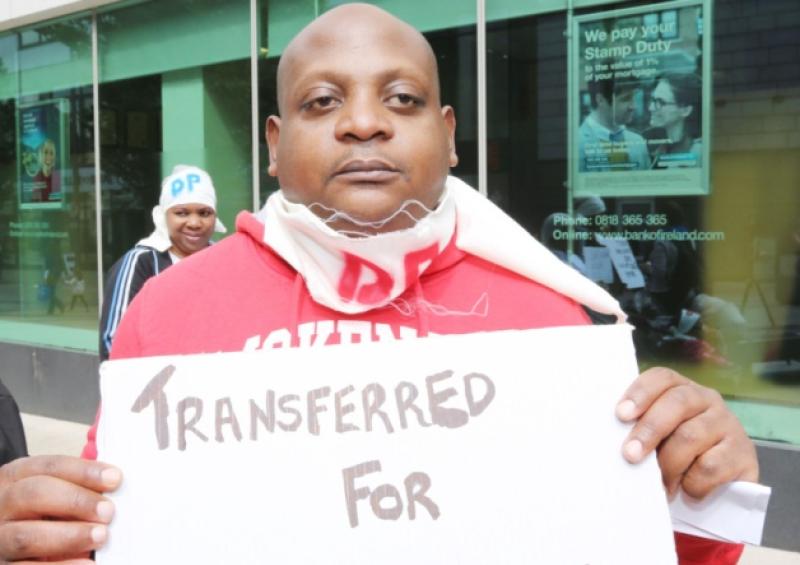 Poor food, broken windows, inadequate heating, cameras in the bathrooms, regular outbreaks of fighting. These are some of the conditions that residents in the Mount Trenchard direct provision centre near Foynes have had to endure, according to a former resident.

Poor food, broken windows, inadequate heating, cameras in the bathrooms, regular outbreaks of fighting. These are some of the conditions that residents in the Mount Trenchard direct provision centre near Foynes have had to endure, according to a former resident.

Jonathan Muhwezi, a trained chemist from Uganda spent eight months in the centre – known as ‘Guantanamo Bay’ among asylum seekers and often described as the worst of Ireland’s 34 direct provision centres.

“Foynes is called Guantanamo Bay in the asylum system because that is where they send you for punishment, for speaking out, or if you have an issue with the management, or the staff. If you have any problem or misunderstanding, that’s where they send you,” said Mr Muhwezi, who has been waiting five years for his asylum application to be finalised. In that time, he has lived in several direct provision centres around the country, including three in Limerick.

He believes that it was as a result of complaints he made while living in a centre in Newbridge that he was sent to Mount Trenchard.

“The conditions in Newbridge were appalling. There were cockroaches, there were bedbugs, there was no food whatsoever,” he claimed.

In that centre, he alleged that residents were expected to provide their own food and cook for themselves, despite having only €19.10 a week to live on.

Theses conditions prompted Mr Muhwezi – a former political activist in his home country – to start a campaign on behalf of the residents.

“I wrote personally to the Minister for Justice complaining about the condition of the place. They sent someone from the RIA [Reception and Integration Agency] over to inspect the place and the report was that everything was rosy,” he recalled.

However, shortly afterwards, he received word that he was to be moved to Mount Trenchard.

In Foynes, he found himself sharing a dormitory with eight other residents, all men and from a variety of backgrounds.

Isolation was a constant issue –at the time, there was a bus to take residents to Limerick city three days a week and a once-daily bus service to Foynes. Otherwise, the only option for residents was to walk the four miles into Foynes. While residents in some centres had access to education and training in areas such as English language and computers, there were no such resources provided in Foynes.

Conditions in the hostel itself were also difficult.

“The food was appalling. We had no heating – the place was cold. It is an old building and some of the windows were broken so it could freeze at night. People used to have problems with coughs and flu and all that. There were cameras in the toilets, it was terrible.”

Fighting among residents was also a constant problem – something that Mr Muhwezi believes is inevitable given the conditions in which they are expected to live and the length of time many are stuck in the system.

“There fights were not caused because residents are deemed to be unruly like what the Reception and Integration Agency says. This is because people are frustrated. I was frustrated myself.”

He added that during his time in Mount Trenchard, he himself was arrested on a charge of assaulting a member of staff. The charge was dismissed, however, when it was brought before a district court judge.

He was finally transferred from Mount Trenchard last August following a series of protests in the centre by residents over the food and living conditions. He is now living in Westbourne, a centre for single men on the Dock Road.

Mr Muhwezi also spent time in the former Hanratty’s Hotel in Limerick city, now a direct provision centre. There, he claimed, he had to share a room with two men, one of whom was a heroin addict. “I was sharing a room with a fellow from West Africa, a Muslim, and another one who was a junkie – he had a heroin problem. He was shooting heroin and there were needles everywhere. The management knew about it but they couldn’t do anything about it.”

Mr Muhwezi believes that if Irish emigrants were treated in such a manner abroad, the Government here would be “up in arms”.

“It is very hard for anyone to start afresh in a new country, but it is harder when you are in this kind of system, when you are not given the tools and help you need to start a new life and to integrate, especially when you are coming from a turbulent background or war zone or you have been abused or trafficked or raped.”

As a qualified chemist, Mr Muhwezi said all he wanted was to be able to work and contribute to society.

“No one is transferred from or to any centre as a result of a complaint made about any aspect of the Direct Provision system. The aim of the RIA complaints procedure, as contained in its House Rules, is to have issues dealt with quickly and efficiently and, for the most part, complaints are dealt with at the first stage, i.e. orally, without proceeding to the written stage,” the RIA said in a statement.