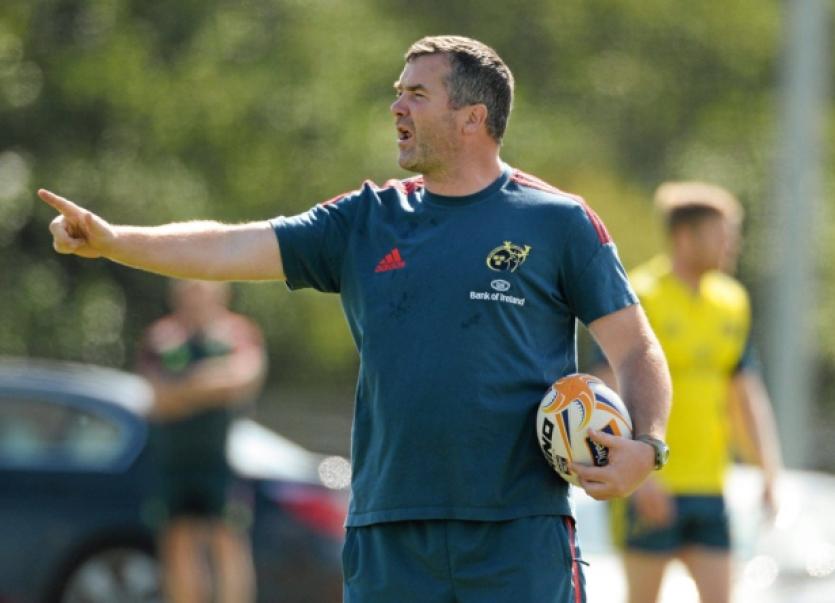 MUNSTER forwards coach Anthony Foley is not ruling out the possibility of moving abroad to further his coaching career in the coming years.

Foley’s contract as the province’s forwards coach - along with other senior members of the province’s management team - is up at the end of the season.

Asked whether the issue of a new contract had come up for discussion, former number eight Foley said ‘there isn’t any chat around that’ at present.

Foley, who was the bookies’ favourite to succeed Tony McGahan as Munster’s head coach prior to the appointment of Rob Penney in May 2012, has received plenty of plaudits for the work he has done with the province’s pack since succeeding Laurie Fisher as forwards coach in the summer of 2011.

Forty-year-old Foley, who won 62 caps for Ireland and played 201 times for Munster, initially worked as a technical adviser and assistant coach (defence) with the province after retiring from playing at the end of the 2007/08 season.

However, new Ireland coach Joe Schmidt opted not to extend Foley’s involvement with the national team.

In a wide-ranging exclusive interview this week, Foley gives his insight on the pros and cons of playing in France for top Irish professionals, the pressures of his time working as an assistant coach with Declan Kidney’s Ireland, the possibility of moving abroad in order to further his coaching career at some stage and his belief that a long-awaited Irish win over the All-Blacks is not far away.

THE Lure of Coaching Abroad

“I THINK you always have to look at everything.

“It’s not just a whim. You can’t not look at the experience other people get from coming to Ireland, getting coaching jobs over here and the experience they get and on foot of that experience getting other jobs elsewhere.

“Those experiences are got from being in it, rolling up your sleeves and doing it. It is no different to being a journalist or working in a bank, you have to work through it.

“You have to find out where the best opportunities are to grow.”

“IT’S a different way of life over there. When you sign for a team in France they own you, they have your contract, they’re your employer and you do what they say.

“I don’t have any reports or stats to back that up, but from my point of view, seeing the amount of games they play, the amount of travel they do over there, the volume of work, bodies break down.

“There would be a lot of posturing around this time of the year as well from a player’s point of view and you got to back the player as well. He has a short career in relative terms.

“In employment terms, their life span is 10 to 12 years, so they got to make as much as they can over that period, whether that’s in Ireland or elsewhere is the decision they have to make with everything on the table, including money, way of life, family, career, longevity.

“You make a decision based on what you want out of your career. That’s what guys have to do. You can’t tell them what to do.

“They are adults. You just have to present the best case forward for them to stay at Munster or Leinster, Connacht or Ulster.

“The floodgates may open for some guys underneath the international level, guys who are frustrated at not getting in and see their time as up, can’t get into the Irish side.”

Temptation to Leave When he was a Player?

“I LOOKED to go to England in the late 1990s when I was neither here nor there in the international set-up.

“The AIL was neither here nor there. The professional game was in that period when we wondered where it was going to go in Ireland. I had looked at going to England.

“On a couple of occasions, I spoke to someone in France, but nothing came out of it.

“I was dam glad I didn’t leave. I would have missed out on the fun we had growing up through the Munster team at the time and living and playing with it, the experiences we had. But they are decisions we have to make.”

Pressure of Being an Irish Assistant Coach

“I REALLY enjoyed working with Deccie (Declan Kidney) up there (with Ireland), but it was hard at the time as well because there was a lot of pressure.

“The Six Nations brings its own pressure and working through two Six Nations’ was some experience being around the camp and being involved in it.

“The pressures which come around the November games last year were colossal in terms of seeding for the World Cup. It was a great experience, really enjoyable.

“It is something you don’t experience at Munster in terms of the absolute, mind-blowing pressure that is there. It is good, good to get a feel for it, good to get a taste of it.”

“I SPOKE with Joe Schmidt over in America on the tour last summer.”

“He said he was looking for someone else to come in to replace Gert (Smal). To be honest, I didn’t really have a problem with it. That is his decision. Joe has to make that decision for what he wants. You back him to make the right decision for the country. Of course you want to be there, you want to work with your country.

“Unfortunately, when someone wants something else, there is nothing you can do about that. You just get on and do the best job you can with the people you are with. That is what I try and do.”

On the Criticism of Munster Winning Ugly This Season

“WE are in a results driven business. If we lose, we lose our jobs.

“Unfortunately we don’t have another job to go to, so we got to focus in on what is required from us and that’s winning games and making sure we are top of the table by whatever means necessary.

“If that is by playing good rugby on the day that we are capable of, then fair enough, we will take that. But if means having to roll up our sleeves and grind out an ugly win, that’s important as well.

“It’s the same four points that you play for every week you go out. It doesn’t matter.

“You don’t get extra style points here. It is really just down to grit at times.”

Heartbreak of Ireland’s Defeat to the All-Blacks

“THERE is a litany of ‘ones that got away’ and that game is in that category.

“The boys played out of their skin. Unfortunately, to lose it in what you could deem extra time, last play of the game, the manner of the conversion not going over and then getting a second bite at it, it is heart wrenching stuff for the Irish players.

“But you have to take your hat off to the New Zealand players as well, the manner in which they kept their composure, went through the phases always believing they could score.

“There is probably a lesson in that for a lot of people out there.

“New Zealand never panicked and kept through to the way they were playing, eventually got over.

“It was hard to watch, to be honest with you. It could have been an historic day and turned out to be just another day. Hard to take for the boys.

“I think it was a needless penalty to give away, but from that, you have to take your hat off to the All-Blacks in terms of how they went about it and scored their tries.”

Will Ireland Ever Beat New Zealand?

“I think Ireland will beat the All-Blacks. We are at a stage where rugby is one of our main sports in the country, where kids grow up wanting to play for Ireland.

“Maybe in the past, because of the amateur era, and the emphasis we have on GAA, the exports we had going over to play soccer, a lot of talented kids going cross-channel to play with English soccer clubs.

“We have a small pool of players in this country and we divvy out our talent to the GAA, to the rugby, to the soccer.

I think when kids grow up now, similar to the way they grow up in New Zealand, that rugby is a priority for them at school.

“They want to learn it. They know there is an opportunity to play for your country, to play at the game professionally.

“I think over the next few years we will be creating enough rugby players of the same stature in this country as the players involved on Sunday. They were capable and had the ability and belief to beat them.

“However, unfortunately the level of player they have in terms of abundance is greater than ours. That’s a fact in numbers.”