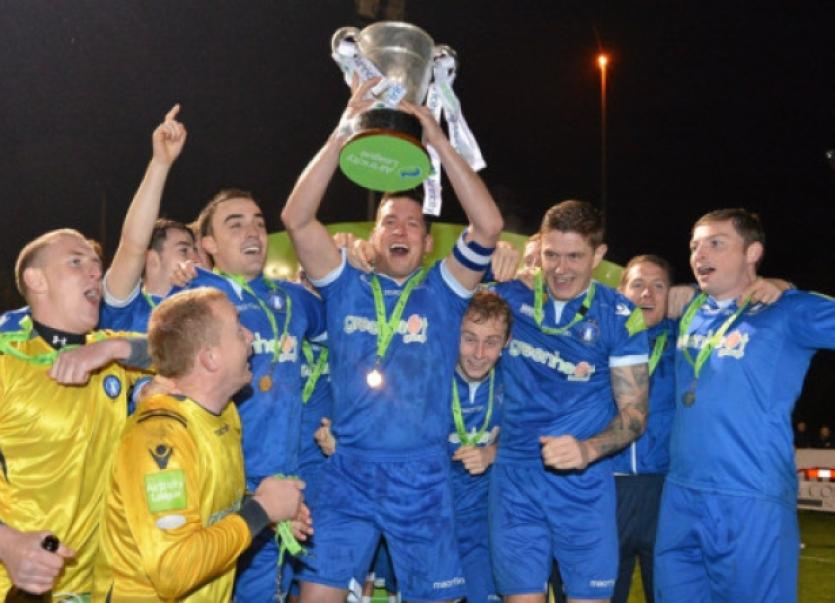 So it’s finally here. Limerick FC are back in the big time. The next couple of weeks will be all about life in the top flight but how we got there is important too.

I’d like to look back to the night we got promotion when I just sat at my laptop and started writing. This is what I came up with and it captures how big a part Limerick soccer has played in my life.

“What are my greatest childhood memories?

Without a doubt those spent with my Dad and without question those early Sunday dinners of lamb, roast potatoes and marrowfat peas prepared expertly by the Mam, followed by a rush to the car in what always seemed a smoggy, crisp kind of day no matter what time of year it was. The next stop was always Rathbane.

We’d park up around the back of the small green while listening to Philip Greene and Gabriel Egan coming live from the other League of Ireland grounds on RTE. We’d then check in with Cormac Liddy, Charlie Mulqueen or John O’Shaughnessy and it was time to turn off the radio.

Then it was down to the gates where Dad was like a politician in training with all the salutes and the ‘howya chiefs’.

We might have a quick chat with Miney O’Halloran about what happened Shels that morning in the LPYMA and off over to the far side where we might hang out with the lads Dad played indoor with. We’d watch the Derry City of Jonathon Speak and Felix Healy, the Turlough O’Connor-managed Bohs or my arch nemesis Dundalk.

I had been to the Markets Field as a child. In fact I sat on the bench as a six-year-old when Pat Nolan hosted Man Utd for his testimonial game but Rathbane was where my love affair with Limerick soccer really began. Pat Grace had a vision that may never have come to fruition but I didn’t care, this was my team. The team that I went to see with my Dad every other week. The team my Dad once played for (well ok their reserves) and scored twice as it turned out (we still have the Leader cutting in his bureau along with Limerick soccer cuttings going back to the early 60s). The lads in school might have liked to slag off the League of Ireland but it wasn’t going to stop me from supporting a team I’ve loved all my life.

Managers came and went. Players signed and then disappeared. Colours changed. Crowds got smaller. But this was my local team, the team that my Dad followed until the day he died. This was the club my Dad was PRO for in a glory era under Eoin Hand. This was Limerick. This is Limerick. City, FC, 37 or United it didn’t bother me. It doesn’t bother This was my team and always will be.

Tonight they sealed promotion without kicking a ball. I’m sure a lot of players, supporters, managers and committee members no longer with us played a part. I reckon one Timothy Michael O’Brien, from Emmet Place, looking down on us with a well-earned smil, had something to do with not putting us fans through the ringer tomorrow night. I just know it.

Next year we will have visits from Cork and Sligo, from St Pats and Bohs, from Shamrock Rovers and my old frieds Dundalk. Next year, the people in Limerick can fall in love with the people’s game once again. Next year we are back.”

Fast forward five months and now we are back. Cork City will be the visitors to Thomond Park on Sunday and I’m like a child on Christmas Eve. Now in a state of the art stadium, with a young team, a young manager and hopefully many new fans, the Super Blues are potentially on the verge of something special.

With all the nostalgia and hope for the future, it would be remiss of me not to acknowledge the man who really has made this all possible. In Pat O’Sullivan, Limerick FC have someone who took a club destined for nothing more than a memory in those wonderful Leader archive pages and decided to make it relevant again.

Alongside a team of dedicated volunteers whose passion for Limerick soccer has to be seen to be believed, Pat has put everything in place to make Limerick FC a team, a club and a concept that the entire Sporting Limerick public can believe in.

I’m already a believer. Now is the chance to bring many more on the journey with us.