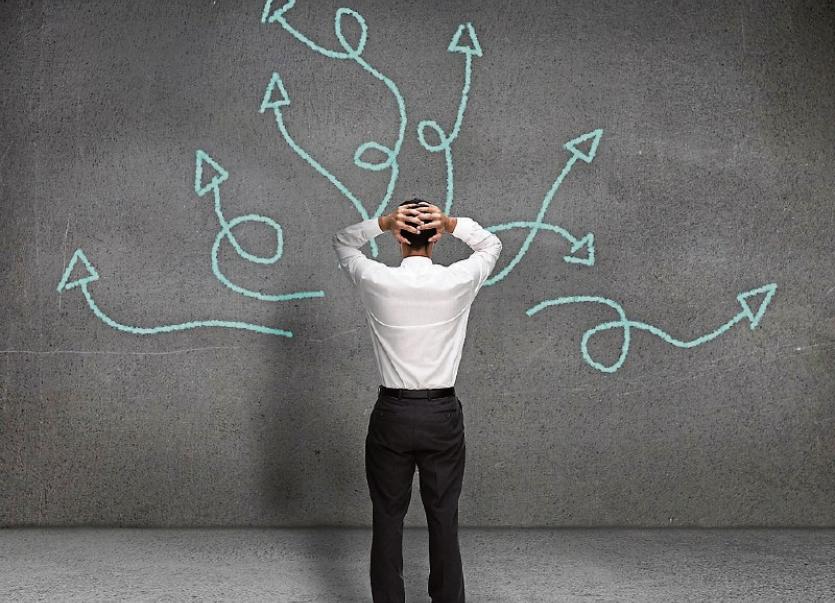 People can become paralyzed with fear when it comes to making financial decisions. Don't let that happen to you

I was introduced to a very successful business woman a couple of weeks ago at an event I was attending in Dublin. She is recognised as an innovative, thought leader in her field. And the list of client companies who use her services and expertise was very impressive.

We got chatting about personal finance and she admitted this was an area she had neglected, even though, as a renowned management consultant, you would think managing her finances would be easy.

We got talking further and one explanation - or maybe it was more an excuse, I’m not quite sure - about why she didn’t take more of an active interest in her finances, was her fear of making a wrong decision.

I learned that her father had made some investments when she was younger, and he ended up losing everything they had, and the impact it had on him and their family remains with her to this day.

Childhood experiences can shape many of our adult attitudes and behaviours when it comes to money. We develop unconscious core beliefs about money that are developed in early childhood and can drive our financial behaviour when we are older.

We can fear money, worship it, avoid it, or see it as a status symbol. The problem with whatever way you view or are impacted by it, if it is not recognised and managed it can get out of control and have significant consequences on your financial life.

So, this woman saw first-hand the pain losing money caused her father, and not wanting to make the same mistake he made, any money she has ever invested in her pension and any other non-pension money is put into cash and bonds.

Now, cash and bonds return little or nothing. In fact they return less than nothing because if you had money invested in a cash fund, the average return over the past five years’ has been -0.55%.

What this meant in real terms for this woman and the money invested in her pension fund, had reduced in value by c. €8,451 over the past five years. It was probably more when you factor inflation, but even without doing so, she was losing significant monies. And while capital preservation was the reason she was invested in cash, she wasn’t preserving it at all.

When you factor in the opportunity she lost by not investing in other accounts the difference was even greater. One fund I knew of, with a particularly low risk rating, had returned 23.43% over the last five years. So, if she had invested in that fund, she would have seen her balance grow by €73,570 instead of going down in value by €8,451.

People become paralyzed by fear and terrified the stock market will implode and all their savings will be wiped out. Because they don’t really know what they are doing, don’t want to get hurt, or make a bad decision like someone they know or heard of, they do nothing.

I began to think, how could I overcome, or at least reduce, this woman’s fear and anxiety? What if I was to present her with a set of facts which she could not dispute or challenge? Would that help ease her fear? It was about the best I could come up with.

So, my first fact was to tell her about market corrections. Corrections mean that the market will fall by 10% in value from its peak. When you hear about a bear market, this happens when there is a 20% fall from its peak.

But guess what? Market corrections or bear markets aren’t new, corrections in particular happen every year whether you know it or not.

So relax, because as sure as winter follows autumn, a correction is likely to happen but unlike winter, a correction will last on average two months (historically the average correction last 54 days). The average length of time a bear market lasts is one year.

When either happens, we have other emotions apart from fear, like frustration, anger and despair. People think the market will never rise again and their losses will only get bigger, but the best investors have a different emotion. They become excited, even greedy, because they see a chance to make money by buying into the stock market at bargain prices.

Remember the stock market losses between 2007 and 2009? Well one particular index dropped 57.6% in two years, but guess what happened since then? It has risen by 266%.

The source of fear and anxiety around money is rarely about facts or reality, but instead is the result of your projection into the future. Taking the emotion out of making a financial decision is tough, but the last thing you want to do is make fear-based financial decisions, so you have to remove as much emotion as you can.

It helps to have a financial adviser who can talk you through your fears and concerns during times when the fear comes back, and begins to whisper, “No, no, no” and “Stop, wait, you don’t know what could happen!”

Your adviser will remind you that the strategy you put together is the right one, and you have made reasoned, fact-based decisions. So, know the facts, and if you don’t, talk with someone who knows the rules of the financial game, and listen to what they have to say.