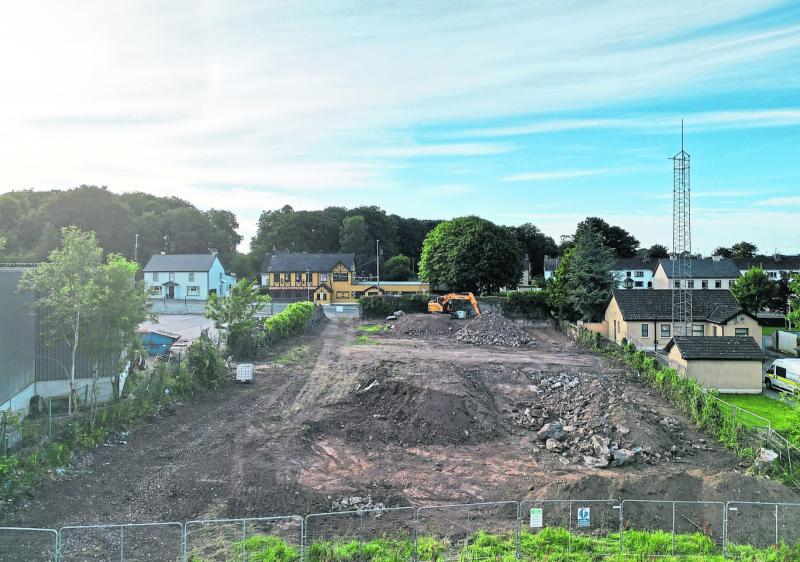 A COMMUNITY council has demanded a local politician withdraw a remark he made over the delivery of a new multi-purpose village hall in Limerick.

Independent councillor Fergus Kilcoyne says he collected more than 460 signatures on a petition seeking a redesign of a proposed community centre in Patrickswell.

This happened after he became disillusioned with plans for a new €1.6m facility, delivered by Patrickswell Community Council, which was approved by local planners last year.

The project is part-funded to the tune of €250,000 from a pot of money which councillors in City West - including Cllr Kilcoyne - award to community projects.

The petition called for a public meeting to re-examine plans for the centre, with Cllr Kilcoyne arguing that the multi-purpose hall did not contain changing rooms or showers, is restricted in height, has inadequate storage facilities, and is too small at 1,300 square foot.

"All we are getting is a community business centre as it stands. And nothing for the youth of Patrickswell for future generations," he said, pointing to the fact planning permission is in place for 300 houses which will eventually double the village's size.

He also said that a planning application was lodged for the development without the consultation of all members of the community council, and that the current plans were "not fit for purpose".

Two members of this council committee have since spoken out to confirm that they were not made aware of the designs until after they were being lodged with local planners. One community council committee member, Seamus O'Riordan, the vice-chairman of Patrickswell GAA club, said he is "on the verge of resigning" over the issue.

The other, businessman John Leddin said: "No committee I know of or any organisation would apply for planning permission without showing the plans to the rest of the committee, be it a golf committee, a soccer committee or a GAA club."

He added at the recent AGM, a unanimous decision was reached to proceed with the development.

A letter sent to members of the community council committee from its vice-chair Mike Ahern, dated October 22, 2021 - seen by the Limerick Leader - states that the executive "hope you have accepted our apology for not affording sufficient time to review and discuss the plans for the new centre".

On his petition seeking a public meeting that same month, Cllr Kilcoyne alleged: "The majority of the community council members do not want the community involved now."

He says he was told by Mr McSweeney a public meeting was not granted because he should have delivered the petition to its secretary.

But three days after sending his letter, the secretary wrote to Cllr Kilcoyne stating: "The executive received your recent petition for a public meeting. We are very concerned with the content of the letter, in particular with the inaccuracy of your statement: The majority of the community council members do not want the community involved now. We strongly refute that statement, we have a strong record of interaction with the community. Our records prove this. At this stage, a public retraction is required. If this is not forthcoming, we plan to hold a full committee meeting to discuss further action."

For his part, Cllr Kilcoyne said he will not be withdrawing the remark.

The public meeting which he requested never materialised, which meant the community council's annual general meeting last month was the first opportunity Cllr Kilcoyne had to raise his objections with the executive.

When he asked if the community centre plans could be redesigned, he says he was told that an extension is not possible under the rules of the grant which is part-funding the scheme from the Department of Rural and Community Development.

Off the back of this, he contacted the Department of Rural and Community Development where he was told that in some circumstances, extension requests can be granted, in consultation with the local authority.

He has this week contacted the secretary of the community council asking her to inform the chairman and executive members to hold an emergency meeting with a view to liaising with Limerick City and County Council to temporarily put the project on hold.

This would be to allow for a submission for approval to redesign the community hub.

However, Mr O'Grady said the executive committee engaged with the local authority on this matter, and were advised to proceed with the project as planned.

"The committee were also advised by Limerick City and County Council based on their previous experience, the scenario as outlined in Cllr Kilcoyne's query i.e a full redesign of the building would require a de-commitment of approved funding. A full new application for funding would need to be submitted. Note that there is no guarantee that funding would be approved for a new application to fund this project in the future," Mr O'Grady added.