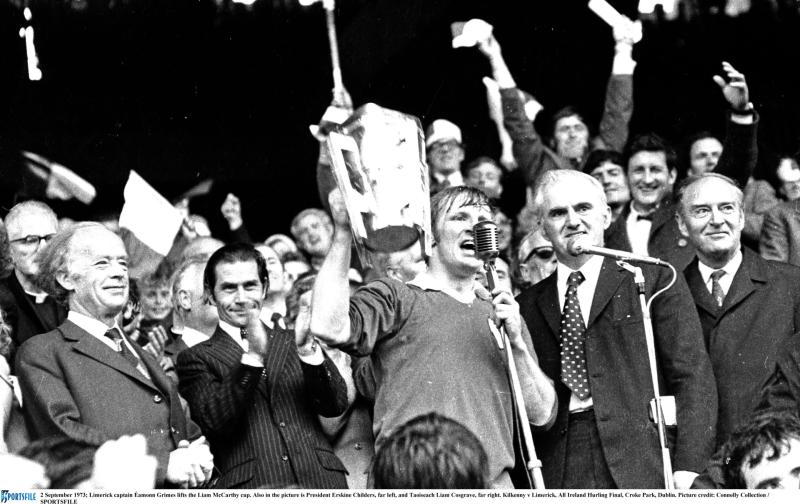 Limerick captain Eamonn Grimes lifts the Liam MacCarthy Cup in 1973 after victory over Kilkenny - in scenes which we hope will be repeated come Sunday!

SUNDAY'S ALL-IRELAND final pairs two of hurling's heavyweights - but the last time Limerick beat Kilkenny in the decider was back in 1973.

Up until the Treaty's win over Galway at the 2018 final, those heady days seemedc fabled and a long time ago in the memory.

However, Limerick people have been fortunate to enjoy four trophy-laden years, with the hurlers not only scooping the holy grail of the All-Ireland title, but also scoring multiple Munster and Allianz League honours.

Now, reader Paul Clifford has written in with his memories of Limerick's 1973 victory which took place in the traditional month of September at a sodden-wet Croke Park.

Notably for the Cats, he recalls a 19-year-old youngster by the name of Brian Cody lining out at left-half back.

Now Kilkenny boss, Cody will be hoping to lead his charges to a 37th title.

In his way stands John Kiely who is bidding to bring Limerick a third-straight title, or indeed a 'Threepeat' as the Americans like to say.

Paul spared a thought for Mickey Graham of the Claughaun club, who despite playing lovely hurling all year, broke his leg in the league final against Wexford earlier in 1973 and thus missed out on one of Limerick's greatest days of all.

"The match referee was Mick Slattery from Co Clare. Out through injury for Kilkenny was their talisman, Eddie Keher and heading into the final Limerick switched Éamonn Cregan from his customary corner forward position to centre half back. Cregan was given the task of nullifying ace marksman Pat Delaney. It was exhibitionist stuff from Cregan. Time after time he delivered lengthy clearances of his left and right side. He was man of the match on the day but was ably assisted by the Patrickswell duo of Seán Foley and Richie Bennis," Paul, who lives in Wolfe Tone Street added.

Due to the sodden weather, he noted the pitch was slippery, leaving the sliothar tough to control.

But matter not did it for Limerick, as they secured a 1-21 to 1-14 win at GAA headquarters.

How nice it would be to see a repeat of that score on Sunday!