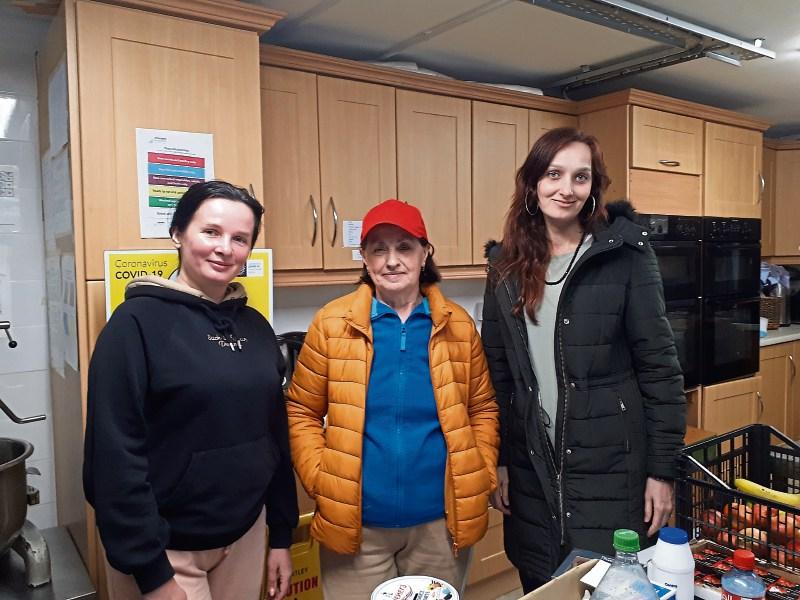 Viktoria, Tamara and Regina in the kitchen at St Lelia's and (below)Valeriy and Alena, with their baby granddaughter Maiia

I HAD TO do something, I couldn't just watch,” says Anne-Marie Stacke as she sifts through a mountain of donations to help some of the hundreds of Ukrainians in Limerick who've arrived after fleeing war in their homeland.

She is one of the many volunteers who have transformed the old St Lelia's school in Kileely on the city's northside into a “one-stop shop” giving “a helping hand” to those arriving after the Russian invasion of Ukraine.

In normal times, the old school in Kileely would fall silent after traditional working hours, it's role of providing educational opportunities to older people done for the day.

But we are not in normal times, and, instead, the facility is all abuzz with activity, with Ukrainians setting up home here.

She chats to the Limerick Leader in between taking calls from local TDs, agencies, and the Redemptorist fathers, who have provided washing facilities for the city's newest residents, ahead of the installation of showers in St Lelia’s this week.

Former classrooms in the old school have been converted into dormitories for those arriving from Ukraine, while two new modular buildings have been delivered in order to provide extra space for the new arrivals to socialise.

“It's a one-stop shop. We'll have kitchens to allow three families to cook at a time. A fridge-freezer has been donated to us tonight. The modular unit will be their communal space, where they can make their own breakfast and lunch,” Linda explained.

Signage in the centre is in both English and the Cyrillic script - from directions to the toilets to helpful translations.

But the language barrier is lessening as the refugees become more and more integrated as the days go on.

“They were traumatised, and not communicating when they first arrived,” said Anne-Marie. “But after a day or so, they've just blended in. They are joking with us. You know what? There's no language barrier any more. We are communicating.”

“I've learnt so much in a short space of time,” Linda added. “Nothing spurs you on more than seeing the difference in these refugees. Seeing the kids go out and play, seeing them chatting, and being able to go in the kitchen and mix.”

Anne-Marie has an office in the centre, where the Aid for Ukraine group she founded in Limerick is operating from.

It was set up to co-ordinate the delivery of donations to St Munchin's, and also - using the power of social media - appeal for certain items which are still needed. 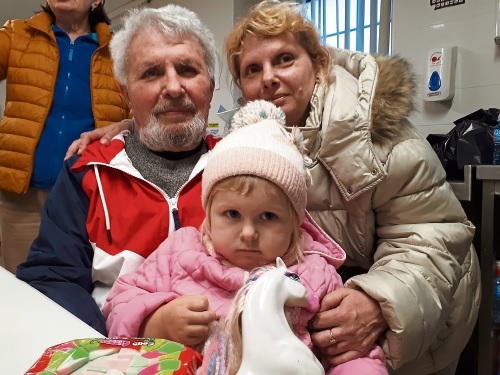 Their Facebook page, which has 749 ‘fans’, seeks chairs, a flat-cap for an elderly Ukrainian gentleman, and good condition book cases among other things.

But one thing they are not seeking is clothing - with bags of new and second-hand garments flying through the doors, leaving Anne-Marie to appeal for people to cease these donations for the time being.

When a refugee arrives into the centre, they are given a welcome pack of clean pyjamas, underwear, shampoo, a shower-gel, a face towel and a change of clothes.

A pop-up free-shop is to be opened shortly to afford those arriving the dignity of choosing their own clothes, rather than having to trawl through bags, as is the case at this time.

That respect is important for Linda, who said: “They are not greedy, they literally came here with nothing. I want them to come in and have that dignity. These people will be like Irish people - they will not want anything. They will want to be safe, happy, healthy and treated with dignity.”

It's hard to imagine the barbarity of having to flee your homeland as it comes under attack.

Regina, from the Ukrainian capital of Kyiv gave a glimpse into the personal horror visited on her and her partner.

She saw an apartment she had saved up for years for destroyed by Russian forces. While en-route to Ireland, a bag of valuables including US dollars, jewellery and her European passport were stolen.

Speaking through a translator - Belarussian national Tanya Dunworth, who now lives in Thomondgate - Regina said: “For the past eight years, we've not gone on holiday. Not a single day to make sure we had enough saved up. Now the whole block is in ruins, destroyed.

“Before I used to dream nice dreams, sometimes with flowers. I was looking forward to the future. Now, it's all darkness. It's is if I am constantly falling down a black hole,” she added, holding back tears.

The only silver lining is the welcome she and her fellow Ukrainians have received upon arrival to Limerick.

“I did not expect to receive such kindness. The Ukrainian people are eternally grateful. Not everyone would do this. We want to prove to you that we are a nation who is hard working, and we will prove for all you have done for us, that we will repay you one day,” she said.

In the centre, the children play with each other, as well as other local youngsters who have formed new friendships. On Sunday last, many saw the sea for the first time on a day trip to Kilkee.

As much as the spirit of the Ukrainian people is inspiring, the generosity of Limerick is also commendable.

Linsey Kinsella and her friend Valerie Houlihan launched an online fundraiser which has raised money for things needed at the centre. As a result, a large smart-TV, a fridge and ladies' accessories have been purchased.

Linsey - whose daughter Chanel, 8, played with 11-year-old Ukrainian refugee Michelle - has first-hand experience of the support of the community which gave her emotional support when her sister Chloe died almost a decade ago.

Valerie added: “It’s been heartbreaking. No-one knows what they left behind. They had to just up and leave. We don't realise how lucky we are. We can go home. We have a bed. These people came with nothing - only a plastic bag - into a country where they don't know anyone.”