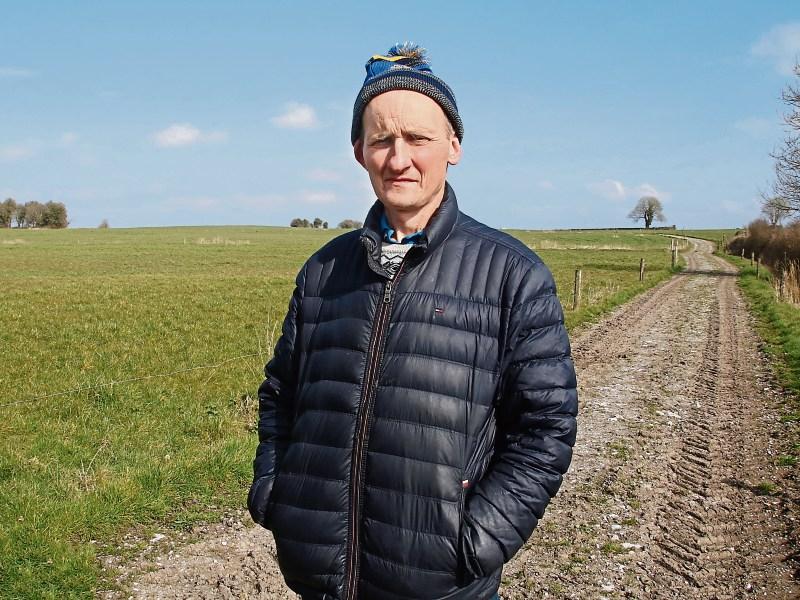 Seamus O’Riordan is waiting to hear if a much bigger road will be going through his land at Patrickswell| PICTURE: Adrian Butler

THE ‘PREFERRED’ route for the new Limerick-Cork road is due next week but Seamus O’Riordan has seen it all before.

The Patrickswell farmer’s land was on the motorway route the last time.

“We are waiting now for the one on March 30 to be known,” said Seamus, who is a dairy farmer in the townland of Garranroe, beside the N20.

“It was cutting through me. The road was splitting my farm in two. They were putting in a tunnel but it was not big enough for silage machinery,” he added.

Seamus has had this hanging over him since 2007.

“It is going on with me 15 years. It started in 2007 and it was 2008 that the route was picked. There was a lot of meetings. I must have attended around 10 meetings,” said Seamus. Of course the whole thing was pulled due to the economic collapse and the project had to go back to the very start in recent years.

'Preferred' route for new Limerick-Cork road to be announced

“I am delighted we are going to know what is happening on March 30 at long last and moving on with our life,” concluded Seamus.

Chairperson of Limerick ICMSA has said that the M20 proposals that have broadened out to include the prospect of a new railway line are causing huge concern and anxiety amongst Limerick farming communities that, according to John Bateman, would be numbered as some of the most productive and technically excellent in the whole country.

Mr Bateman said that farmers want to see the land-take and disruption minimised and the inclusion of a railway is adding to the already considerable uncertainty.

“I suppose the first point is why we would upgrade the road communication at such enormous expense and in a way that’s aimed at increasing the road traffic between Limerick and Cork and speeding up the journeying  times, only to then announce that we’ll be constructing a new railway line and facilities – also at enormous expense – that’ll be designed to compete with the new motorway? Is there not a degree of contradiction in this strategy?” asked the Meanus farmer.

Mr Bateman said it was difficult to get away from the suspicion that the railways proposal was more of a political symbol than a practical option and as such would likely fall at the first meaningful cost-benefit analysis. But that prospect did little to allay the concerns of the farmers in the affected areas who would now have to continue working away against the threat of their holdings being divided or made completely uneconomic through either roads or rail.

“Unnecessary infrastructure will simply have to be cut out of the plans given the impact on individual farmers and the communities they backbone”, concluded Mr Bateman.