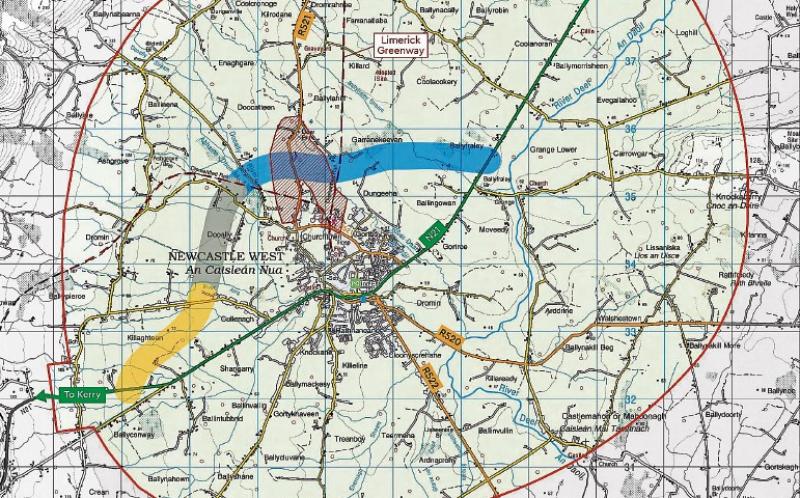 A map of the proposed route of the Newcastle West bypass

OVER 100 submissions have been received about the preferred routes for bypasses of Newcastle West and Abbeyfeale, with the majority of them relating to the Newcastle West route.

Meanwhile, three deadlines have been missed for a decision on the proposed new Limerick to Foynes road which will by-pass Adare.

It will now be January 28 before An Bord Pleanála makes known its decision and there is frustration in Adare at yet another delay.

A total of 110 submissions were made about the Newcastle West and Abbeyfeale bypasses, and an online petition, with over 600 signatures, calling for the protection of the Limerick Greenway was also submitted.

According to Tom O’Brien, a member of the ad hoc Bypass Group in Newcastle West, there were two major issues raised by objectors. One is the crossing of the newly refurbished greenway at two or possibly three points, most likely with underpasses.

There was very little time, just a bare four weeks, for people to make submissions, Mr O’Brien said, and the difficulty was in objecting to something that hasn’t been designed yet. “We don’t know whether it is a dual or single lane carriageway,” he said.

“With the greenway, it is the first time this region has had a significant tourism attraction,” said Pat O’Connor who is also active in the Bypass Group.

“The big problem is that it will be diluted completely. It will drive tourists further down the line.” As part of the campaign, Mr O’Connor added, they are investigating a number of issues at EU level.

Ann Herbert from Dually, Newcastle West, was among those who made a submission and is living in dread of “the worst case scenario” : that she will have to leave her home. Her family, she said, had been living in Dually for three generations.

“My father was born here in 1915 and my grandfather 30 years before that and now I am living here.” She has been in contact, twice, with a member of the project team but will have to wait several more months before she and her family know their fate.

According to Ger Carey, the executive engineer handling the project, in addition to the 110 submissions for both schemes, there were hundreds of general contacts via phone, emails, and virtual meetings.

After the preferred route went on public display, he explained, letters were sent to all those known to be within the corridor.

“The next step for us now, within the next six to nine months, we will be contacting people who we would see as being directly affected,” he said.

The next stage in the project will involve the detailed design of the route, narrowing down the 400m corridor to a 75/100m wide corridor. It will also involve the preparation of an Environmental Impact Assessment report.

A planning submission will be prepared and the aim is to submit the plan to An Bord Pleanála by the end of 2023.