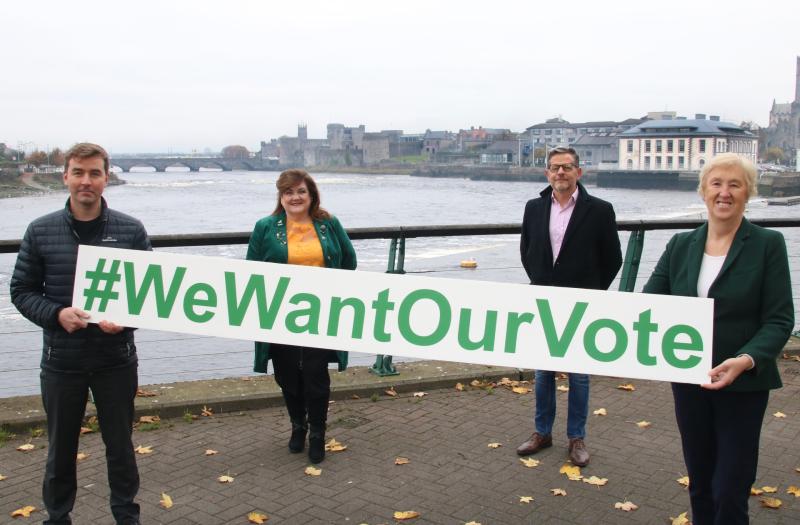 ‘We want our vote’: Dr Stephen Kinsella, Linda Ledger, John Moran and Mary Fitzgerald at the launch of the campaign | PICTURE: Adrian Butler

MORE than two years after the Limerick electorate backed plans for an executive mayor, a campaign has kicked off to get the government to act on the result.

It comes with the Minister of State responsible for the ambitious project, Peter Burke, due in Limerick later this week.

Codenamed the #WeWantourVote campaign, the group is calling for people across the city and county to sign a petition urging a date for the inaugural election for the executive mayor to take place.

Speaking to the Leader, Mr Moran said he hopes that the number of people who sign will act as a vehicle to show government how much those from Limerick want to see an election called without further delay.

“This is about everybody who has shared my frustration with the speed at which Dublin is giving Limerick what they voted for and making sure we get that role with power and budget. That's what this is all about,” he said. “Mainly this is about having a portal for Limerick to explain how much we care to get this done. Sometimes it's hard for even our local politicians to understand the strength of desire in Limerick for change, for more transparency, for locally, a sense of identity, and a voice for Limerick.”

The petition – available online at wewantourvote.ie – is named 1,000 days, 1,000 voices with the aim being that an election must take place before this period is reached.​

Mr Moran has ruled himself out of making his own bid to become Limerick’s first directly elected mayor.

“Never say never, in 10 years or 15 years time maybe. In the short term, it's not my focus. I've lots of other things going on. It should be a great job, to be able to serve Limerick, to have the power and budget to make change in Limerick. There's nobody I know in Limerick who wouldn't want to be the mayor if the job is set up correctly,” he added.

One of these people appears to be the St Munchin’s Community Centre chief executive Ms Ledger.

She said: “Would I like to be the mayor? Yes, I would because I love people, I love the people of Limerick and I really do think we need someone who will put the people first. I do love our city as well. I think it would be lovely to work and enhance our city and have everybody use it. Both local people and those from afar.” The chief of the Kileely centre added: “My hobby in life is I love reading government policy and I feel Limerick people do need a voice at the table in government.”

Meanwhile, at this month’s council meeting, members passed a motion -albeit by a single vote – from Labour’s Conor Sheehan calling on Mr Burke to announce a date for the election.

The City North member said he was “alarmed” at the possibility the mayor might only have a limited budget.

“A Mayor without a budget available to them is about as useful as a fork in a sugar bowl. “The directly elected mayor must have meaningful powers in the areas of housing, transport, water services, development management, environmental services, recreation and amenity, agriculture, education, health and welfare,” he added.