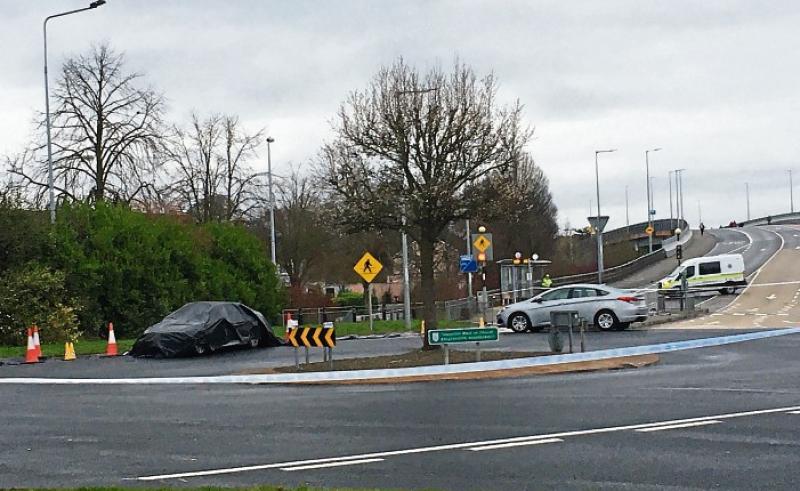 The scene of the collision which happened in March

AN UNINSURED driver who has never held a licence has been jailed over a serious road collision which left another  man with catastrophic injuries.

He had also pleaded guilty to an offence, under Section 106 of the Road Traffic Act, of failing to provide medical assistance to Mr Hennigar.

The 24-year-old, from Dooradoyle, was crossing St Nessan’s Road – near the Crescent Shopping Centre – shortly after 11.20pm when he was struck by a speeding BMW.

Shocking footage of the incident was played during a sentencing hearing at Limerick Circuit Court this week.

In it, the BMW can be seen striking Mr Hennigar, who was on an e-scooter, as he makes his way across the pedestrian crossing.

“He did not stand a chance” said Garda Pat Melody.

He told John O’Sullivan BL, prosecuting, the BMW was being pursued by gardai at the time as they had encountered the vehicle at Childers Road a short time earlier.

Judge Tom O’Donnell was told Mr Hennigar sustained multiple life-changing injuries, including a brain bleed. He is currently confined to a wheelchair and is due to be discharged from the National Rehabilitation Centre in Dún Laoghaire next month.

Mr O’Donnell, who has more than 50 previous convictions, abandoned the BMW and fled the scene following the impact.

Garda Melody said the BMW was travelling on the wrong side of the road when it struck Mr Hennigar and that prior to the collision, it was being driven at speed and broke a red light.

Mr O’Sullivan said while the defendant did not intend to injure anyone he bears a “high degree of culpability” due to his recklessness on the night.

“He made a conscious decision to drive in the manner he did,” he stated.

She said her only son was “full of life” prior to the incident and that she thought he was dead when gardai called to her door on the night.

In her statement, which was read into the court record, she said it’s a miracle that Daniel survived and that she and her family will not stop until Daniel is in a position to live as independently as he can given his injuries.

“We are blessed he is alive and still with us," she said.

Barrister Pat Whyms said his client had met the case “front and centre” and he asked the court to note his cooperation and early guilty plea.

“He didn’t intend to hurt anybody. He made a series of stupid decisions,” he said, adding he wished to “apologise most profusely”.

Imposing sentence, Judge O’Donnell said Mr Hennigar had been “cut down by the criminal and reckless actions of the defendant.”

He said the excessive speed and manner of driving were aggravating factors and that Mr O’Donnell bore a high level of culpability.

He imposed a four-and-a-half year prison sentence along with a ten year disqualification.