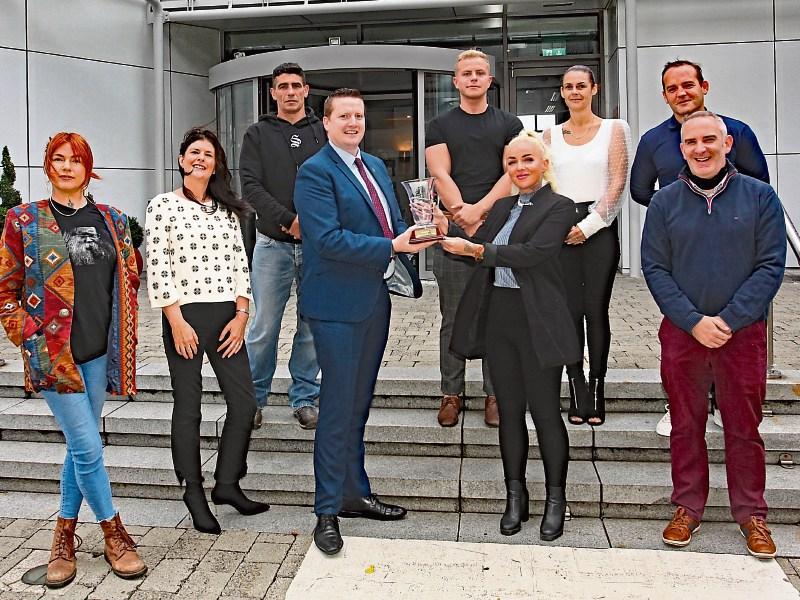 THE team behind an array of iconic murals which have transformed the landscape of Limerick, have been named the Limerick Persons of the Month.

Draw Out - Urban Art were honoured for marking Limerick city as a national and international focal point for the highest quality street art.

One of the highlights of their work of course is the mural which was unveiled in April of the legendary Limerick lady, Dodo Reddan, real name Hanora Quirke, who was renowned for her two passions in life, her great love of dogs and rugby.

“Draw Out is a project that grew out of work I was doing in communities,” explained Catherine O’Halloran, Managing Director of Draw Out who, along with other members of the team, was presented with the award at the Clayton Hotel.

Catherine was working with young people in communities in Limerick and was eager to engage them with art that they felt represented them and made sense to them.

“We started playing around with murals, with street art, and then we engaged with artists and looked at derelict sites and the impact derelict sites had in terms of Regeneration in Limerick and then fused the two projects together.”

The very first mural was unveiled in Ballynanty in 2012 - a beautiful piece depicting two women which is still there to this day.

Catherine, who is originally from St Mary’s Park and who now resides in Corbally, studied design and architecture in Limerick Senior College before becoming a psychotherapist.

She is “very passionate about art”.

“It’s very much part of my life and I really saw the therapeutic benefits of it for young people as well as in terms of wider community development,” she said.

“It was just a passion that grew. I saw as well there was a problem in Limerick with illegal graffiti and I proposed to the council a way of engaging young people if we created legal spaces and engaged them in projects like Draw Out and festivals like Make a Move, that we could channel that energy into something positive.”

Catherine is always looking at new potential sites, always thinking about artists, and always researching other art forms that are emerging within street art.

“My other work which is connected to Draw Out is Limerick City Build in which we work with disenfranchised young men across the city. The team  that’s involved in that then supports me in the work for Draw Out. It’s a small enough team in Draw Out - a core team of less than 10 -  but we really work hard behind the scenes because we don’t have massive budgets for Draw Out every year. It’s a labour of love for sure.”

The group applies for any funding which they feel they could be entitled to.

When it comes to choosing a location for a mural, Catherine is adamant that it needs to be connected to a community of some kind.

“If it’s in the city centre it needs to be highly visible - we are always scouting for locations. There are loads of things then that you have to  consider - accessibility, whether there will be major road closures. Once we have found a good location I present that to the council to see how viable that is - is it public or private property. Based on the location, I come up with a concept around what would work best there and then the artist is sourced.”

While the Draw Out team have long been recognised and praised for their eye-catching work including the  Eye Scream mural and the mural to the late Dolores O’Riordan,  it was the mural to Dodo Reddan which brought them to a whole new level in terms of wider recognition.

Dolores is honoured with new mural in Limerick city

Dodo, of course, was well known for her pram full of dogs. She rescued countless dozens of stray dogs throughout her life and had been caring for 24 dogs when she passed away following a short illness in September 1995.

Dodo’s other passion was rugby, and more specifically Young Munster RFC. She attended every game and was a regular at Thomond Park.

“There were conversations for a long time in Limerick about how we would honour Dodo. There were talks of a statue, or a mural. Cllr Sarah Kiely was very instrumental in cementing that idea. For me, and the work that I do, I thought Dodo was a perfect character really - she was working class, she really personifies Limerick and its spirit and its essence. She was eccentric and she was a really strong woman. These are all the things I love to celebrate about Limerick,” Catherine explained.

Artist Omin (pictured, below) was chosen to do the mural.

“We had worked with a lot of the portrait artists in Ireland already and someone I had been eager to work with was Omin - he had done some work prior to that, very illustrative and loads of joy in his work, almost like children’s illustrations, story book telling which I thought would be perfect for a character like her and I think he did an amazing job,” said Catherine of Omin who completed the work on site in a week. 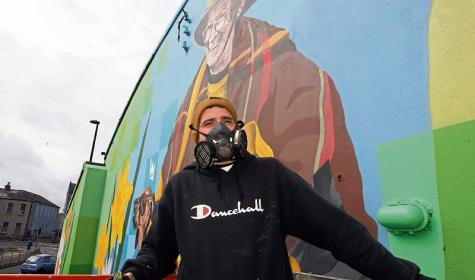 There are, of course, plans for further works but it’s all top secret at the moment according to Catherine who thanked all those who have supported Draw Out in their work.

“Thanks to all the artists we worked with throughout the years - it’s really on the basis of their talents and skills that we do what we do. Thanks to the communities we work with throughout the projects, and to Limerick City and County Council - the arts office in particular for the support they have given us. And finally thanks to Paul Foley who was the first person to support us and who was a mentor and partner in the initial stage of the project.”