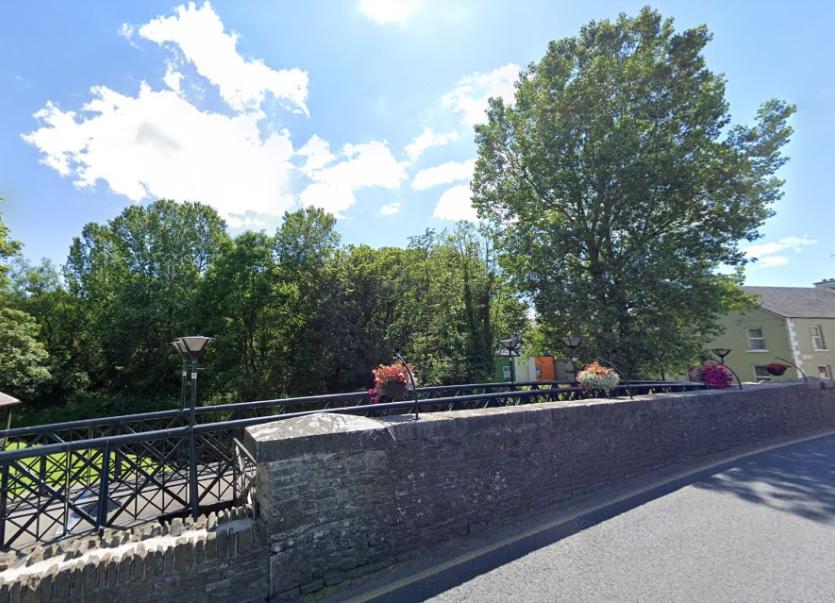 According to Cllr John Sheahan, the eyes of the bridge in Athea are backed up | PICTURE: Google Streetview

THE plan to remove gravel from the River Galey in Athea has been welcomed by local councillors who believe it is necessary to prevent flooding in the village.

But the long-term plan for flood prevention in Athea is not likely to be completed until 2024 at the earliest.

“The bridge needs to be cleared,” Cllr John Sheahan said this week following an application by Limerick City and County Council to An Bord Pleanála for permission to carry out the work.

The eyes of the bridge are backed up, he said, and if there were to be torrential rain, as in 2008, then there could be serious flooding in the village.

“It will give us a breather until the flood relief scheme is in place,” he said.

“The council got the Office of Public Works (OPW) to go in and remove gravel in 2008 after the flood,” Cllr Sheahan continued.. “They moved it from the bridge area further along in the river.”

According to the councillor, the OPW had prepared a plan for how the gravel would be removed and would be carrying out the work on behalf of the council once planning permission was granted. “They are hoping to get a quick turn-around as the window for carrying out the work is between now and September,” he said. A Natura Impact Study had to be carried out, he pointed out, as the area was a Special Area of Conservation.

Another local councillor, Liam Galvin also welcomed the plan to remove the gravel. However, he added: “I do think there is a bigger issue. There are too many state agencies with responsibility for our rivers and waterways. Either the local authority is given full responsibility and funded properly to do so or we have one state body responsible,” he said.

He named the OPW, Inland Fisheries, National Parks and Wildlife among the many agencies with responsibility for certain aspects of rivers and lakes or particular stretches of river. “Nobody seems to know what the next one is doing.”

He called on Minister Patrick O’Donovan to resolve the matter, arguing that either the OPW should have full responsibility or a new Waterways Agency should be set up.

Meanwhile, it is likely to be 2024 before the flood relief scheme for Athea is in place. The plan for the scheme was first unveiled to councillors in 2018 as part of the government’s €1billion national flood relief plan.

Contractors were appointed in October 2019 but the first stage in has yet to be completed. According to Cllr Sheahan, the contractors are now awaiting a hydrology report.

The second stage, preparing the planning notice, was due to begin in this, the second quarter of 2021. Stage three, preparing a detailed design is due to begin in January next year, followed by the tender process, with the aim of beginning construction early in 2023, to be completed in 2024.

Members of the public and interested parties have the right to make submissions or observations to An Bord Pleanála on the plan to remove gravel.

The closing date is July 2.