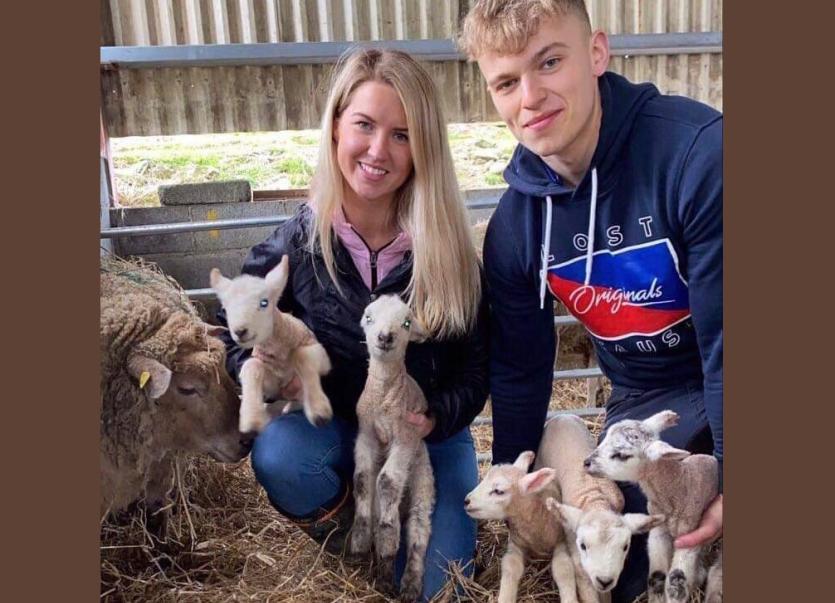 Edward Quinn, Anglesboro, and Hannah Ryan, Ballylooby, with his five newborn lambs and one tired mum

GALTEE Gaels senior footballer Edward Quinn is good with his hands on the GAA pitch and in the lambing shed.

The Anglesboro man delivered quintuplet Texel lambs. Mum, a Vendeen ewe, and the lambs are all doing well.

The Leader only learned about the rare occurrence thanks to Pat English, our Anglesboro-Kilbehenny correspondent.

Edward, aged 23, said when the sheep was scanned only four lambs were predicted. But he had a feeling it was going to be more.

“I kind of knew by her - she was wicked heavy. They were either going to be four big lambs or she was going to have five. She was massive,” said Edward.

So when she began lambing on Saturday, March 6, he knew he was going to have his hands full.

“I had to pull the five of them. I copped it after two that they were a bit handy in size for only four. When I had the third one out I knew I had at least two more coming. I thought I could feel another set of legs when I was taking out the fourth and the fifth one was straight behind,” said Edward.

One lamb is handy enough but the other four are great sized lambs, he said.

“They are all flying it - three ewes and two rams. It is rare that five would stay alive and healthy. It is nice to get it - it is something different.

“Four lambs would have been the most I've ever had before this,” said Edward, who is the son of Joan and Jerry Quinn and he has one sister, Clara. He has also been helped with bottle feeding three of the lambs by his girlfriend Hannah Ryan.

Since Edward was a child he has loved farming and helping out his uncles.

Five years farming, five lambs from one ewe and five points from play for Galtee Gaels when Covid restrictions ease would round things off nicely.