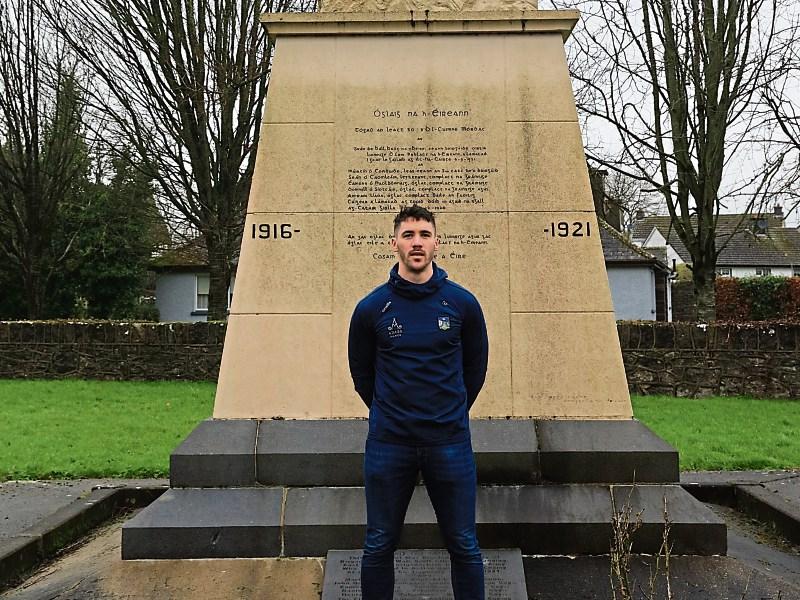 From one Bruff warrior to another: Limerick’s All Star corner back Sean Finn in front of the Sean Wall monument

THE SEAN Wall Memorial Committee has received the support of another Bruff legend – Sean Finn.

The photo of Sean Finn in front of the Sean Wall monument has been made into T-shirts. They will be given to all who take part in a virtual 5/10k run or walk which starts on St Patrick’s Day until April 5.

All funds raised will go to the Sean Wall Memorial Committee who are working on two big projects. A GoFundMe page called Bruff Sean Wall Renewal has also been set up.

Firstly, essential works are to be carried out on the Independence memorial dedicated to Bruff native, Brigadier Sean Wall, his fellow comrades in the East Limerick Brigade of the I.R.A. and to all volunteers who fought for the Irish Republic in the struggle for Independence.

Tommy Meany, chairman of the Sean Wall Committee, said the monument was unveiled by President Sean T O’Kelly on October 12, 1952.

“Essential work needs to be carried out - within the first six months of 2021 - on the Sean Wall Monument in Bruff to prevent serious structural defects in the future,” said Mr Meany.

While the repair of the monument is the priority they would also like to improve access to the site, which is meticulously maintained by Bruff Tidy Towns, and attract more visitors.

“We want to increase the information available to stimulate national interest by including individual information signs on each of the 16 leaders who were executed in May 1916 for their involvement in the Easter Rising .

“As part of the commemoration celebrations in Bruff in 2016 we marked the centenary of the Easter Rising, a seminal moment on Ireland’s journey to independence, by commissioning large pictures of the 16 executed leaders which were exhibited on the wall adjacent to the Sean Wall Memorial and this was very well received by locals and visitors. We would now like to make this a permanent exhibition,” said Mr Meany.

They also want to provide a focus on the contribution of women in the struggles with emphasis on Limerick woman Kathleen Clarke, nee Daly, who was wife of Tom Clarke and older sister of Edward Daly, both of whom were executed in the aftermath of the Rising.

“She was born in Limerick with strong Bruff connections and went on to become Dublin’s first woman Lord Mayor,” said Mr Meany. Installing seating for the comfort of visitors, many of whom will be elderly, is another wish.

The committee’s goal is to create a calm and tranquil space which when finished, will provide a special sanctuary where people can stop for a moment, reflect, and remember those who lost their lives serving their country. This will add an extra dimension to the existing site by developing a national attraction to the current memorial.

The Sean Wall Monument, JFK Statue and Fitzgerald Centre which are in the triangle known as Fairgreen provide different but complementary cultural tourist attractions.

To learn more log onto the Sean Wall Committee Facebook page; to donate towards both projects (the total cost is expected to reach €75,000) visit the GoFundMe page. And to sign up for the virtual run and walk please visit the Bruff Community Facebook page.