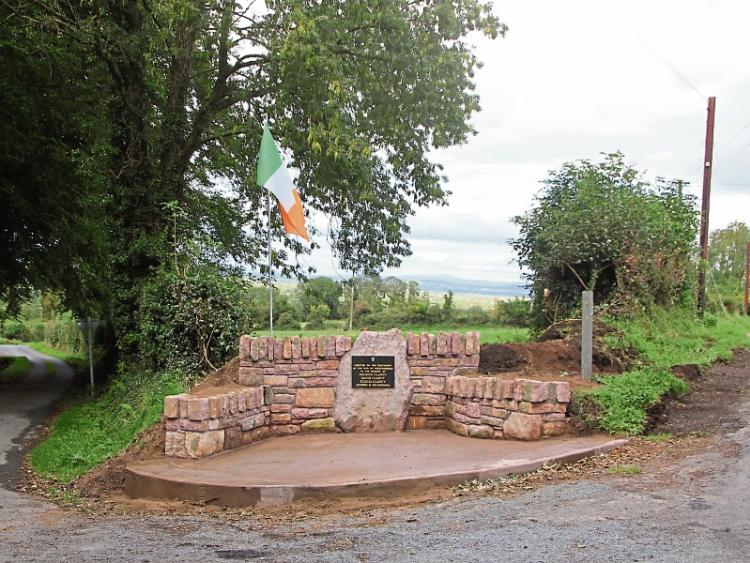 A memorial plaque, inscribed with the names of David, Patrick and Statia Clancy, was erected recently at Upper Cush Cross, Kilfinane on the land once farmed by the Clancy family.

The erection of the plaque was organised by local men, Patrick McGrath and Robert O’Sullivan, in recognition of the sacrifices made by the Clancys during the revolutionary period. The plaque is mounted on a slab of local sandstone and the surrounding stone walls were constructed by stonemason, Michael Fitzgerald.

In May 1919, after the momentous events at Knocklong Station the Clancy family’s farmhouse in Cush was one of the two local safe houses in which the rescued Sean Hogan was hidden. His wounded companions received medical care there before the party was moved to West Limerick. In February 1921 the same Clancy home was burned down by the military in reprisal for the burning of a British military plane in nearby Bosnetstown.

David Clancy (known as Davy), an active member of Cush Company of Volunteers, participated in every military engagement in the area during the War of Independence. After the Treaty he took the Republican side and was interned for a period. He died in 1955 aged at 68 years.

Patrick Clancy, born in 1891, also took a very active part in the War of Independence until he met his untimely death on 16 August 1920. Earlier that year he had been among the group of untried Irish political prisoners detained in Wormwood Scrubs who succeeded in securing their own release by going on hunger strike. Along with Donnchadh Ó h-Annagain he is regarded as the originator of the scheme which grew into the East Limerick Flying Column. He served with that unit before taking up his position as Creamery Manager in Allensbridge near Kanturk.

He had just been selected to command the North Cork Flying Column of the IRA before he was fatally wounded while trying to escape from a British military raid in Derrygallon outside Kanturk.

The Clancy sisters, like their Cumann na mBan colleagues, carried dispatches, scouted and gathered intelligence, kept a safe house in readiness for Volunteers on the run and faced the constant threat of military raids on their home. In local memory Statia Clancy is regarded as a Constance Markievicz figure such was her involvement in the struggle for independence.

Like her brother and the majority of Cumann na mBan membership she opposed the Treaty. She was interned for seven months in 1923 by the Free State authorities for her ‘Irregular’ activities and shortly after her release her health broke down and she died in 1928 at the age of 37 years.