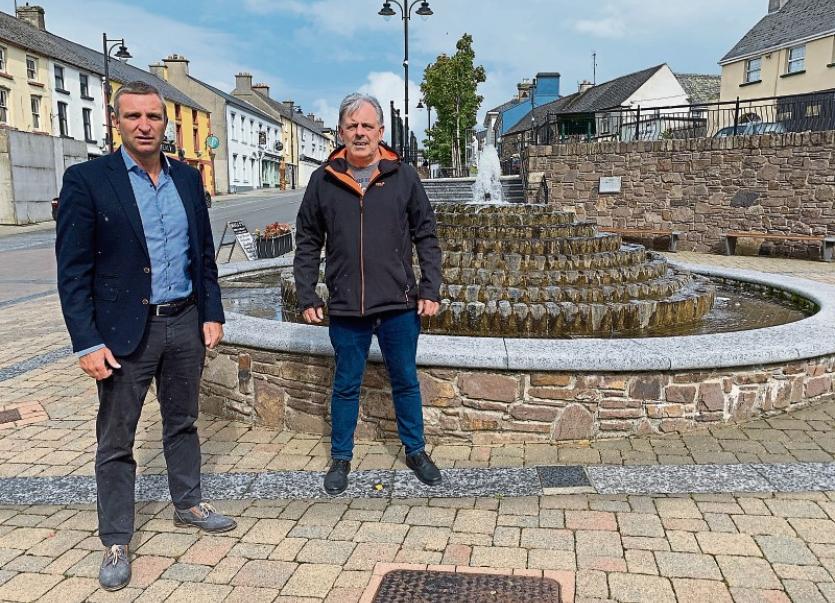 Minister Niall Collins, with Cllr Mike Donegan, has called for the investigation to be commenced promptly. Inset: The Staker Wallace war memorial Below: Full page coverage in the Limerick Leader back

“ARE these the bones of Staker Wallis?” was the headline in the Limerick Leader in 2006 after human remains were found in Kilfinane.

Fourteen years on - we are no closer to finding out. The Leader has learned through correspondence from the council that, “This project was put on a back burner due to ongoing pressure of work”.

Kilfinane man James O’Brien, who raised his concerns over the delay with Minister Niall Collins, said: “Those bones lay forgotten for over 200 years. It's a fright to God if they are forgotten again.”

Patrick Staker Wallis (or Wallace) fought and died for Ireland. He was executed by the British in the lead up to the 1798 rebellion. Wallis was commander of a local division of United Irishmen and was arrested following an alleged plot to murder the local landlord, Capt Oliver.

The 65-year-old was offered his freedom by Capt Oliver in return for the names of other United Irishmen and the location of their weapons. He refused.

Wallis was jailed in Kilfinane and underwent public flogging before he was publicly hanged and beheaded. His head was put on a spike above the Market House for a number of weeks before he was buried in the town.

The actions of the Irish patriot, believed to be from Bulgaden, were never forgotten. He is remembered in song - A Lament to Staker Wallis; name of a GAA Club and a statue in Kilfinane.

In 2006, human bones were discovered in Kilfinane when the council were carrying out works. Locals believed that the remains of Wallis were among the bones found. It was believed three men were buried in the grave.

At the time, Limerick County Council said they would be sent to an osteoarchaeologist who are able to determine sex; health, lifestyle, diet, mortality and physique.

“The process could take up to six months,” said the council. There was also talk of using DNA technology to determine if it was Wallis.

Given the way the bodies were buried, it was entirely possible that it was an execution type burial as they were buried in quick lime in a public place, said the council.

Mr O’Brien said it all tallies as two other males were executed around the same time for their part in killing the man who helped capture Wallis. Mr O'Brien also found reference to English soldiers executing rebels and throwing their bodies in “croppy holes”.

“The Irish rebels were called croppies because of their hairstyles I think. After they were executed they were thrown in mass lime graves called croppy holes,” he explained.

Mr O’Brien can remember the day the bones were discovered in 2006 vividly.

"I have it in my head since the day it happened. About a year ago I was doing a bit of clearing out at home and I found a book about Staker Wallis. I said to myself, ‘We never got an answer on the bones’. I contacted the council and got no response," said Mr O’Brien, who is a member of Kilfinane and Coshlea Historical Society.

“Two other members had also been trying to get answers about the bones. They have both since died, they were elderly men and they never got an answer,” he said.

Under Covid lockdown, the blocklayer candidly admits “I had too much time on my hands”. He contacted the council about the condition of the Market House and the church in the old graveyard. When he was contacted by the council he asked about the bones.

“That list is 14 years old. I said about the elderly men who tried to find out who have since died. I said, ‘Those bones lay forgotten for over 200 years. It's a fright to God if they are forgotten again’.

“There are still relatives of Wallis in the area. DNA could be extracted and you could see if it was him. I think it’s unethical that the council has the bones for 14 years. Could they be brought home and given a proper Christian burial? That time they were put into the ground, they weren't put in there by loved ones," said Mr O’Brien, who wrote to Minister Niall Collins asking if he could speed up the process.

“I do not think it’s acceptable that 14 years later nothing has been done with the bones. 1798 was a huge time in our country’s history and this event was a huge event in my town’s history,” wrote Mr O’Brien.

Minister Collins contacted the council and received a reply over two weeks later.

“The bones are safely held by Limerick City and County Council. This project was put on a back burner due to ongoing pressure of work.

“I will have to identify funding to process the remains and to carry out any further testing which may be required. But before I can do any of that I need a find’s number from the National Museum of Ireland, and I requested that this week,” reads the response.

Minister Collins said he was “very disappointed with the reply”.

“Sitting on skeletal remains for over 14 years, which are an integral part of the history, heritage and culture of Kilfinane is simply not acceptable.

“There is also a lack of decency regarding the council having the bones for this length of time. Whoever they may be, they deserve a proper burial. There should be a consultation with the local community as to what should be done with the remains,” said Minister Collins, who called on the council to commence the investigation promptly.