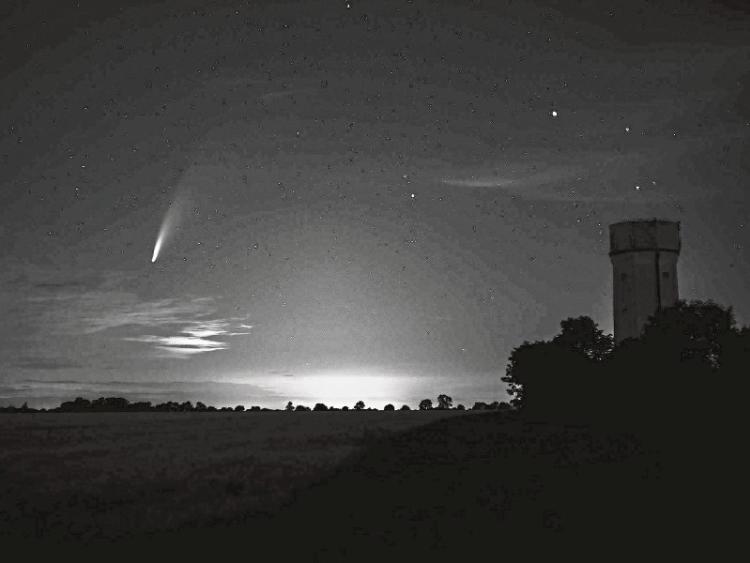 Over the last few weeks comet Neowise has been gracing our northern skies creating quite the excitement in the astronomy world.

Comets are relatively small celestial objects that are the remnants from the formation of the solar system 4.6 billion years ago. They possess a core that is composed of ice, dust and other rocky material. Often referred to as ‘dirty snowballs’ comets travel around the Sun in highly elliptical orbits. They can spend many hundreds or thousands of years in the depths of the outer solar system but it is when they come close to the Sun that we start to notice them. As a comet approaches perihelion (closest position to the Sun) the material that forms the core of the comet starts to evaporate forming a large cloud surrounding the core, known as a coma. But perhaps the most impressive part of a comet is its tail. Typically a comet will have two tails, a gas tail and a dust tail but it is generally the dust tail that we can see with the naked eye. As the name suggests the dust tail consists of dust particles that are emitted from the comet’s core due to escaping gases, and when fully developed can extend for millions or even hundreds of millions of kilometres.

Comet Neowise made its closest approach to the Sun on the 3rd of July and for the early part of July was only present in the predawn sky. Neowise is now moving away from the Sun and towards Earth making its closest approach to Earth on the 22nd of July approximately 103 million kilometres away. As a result, from around mid-July we have been able to observe Neowise in the evening sky after the sun has set. The comet is best seen under a dark sky away from sources of light pollution. While Neowise is visible to the naked eye, it is particularly impressive through a pair of binoculars. Looking northwest wait until you can locate the familiar asterism in the constellation Ursa Major known as the Big Dipper, comet Neowise is located below this. As the sky darkens the visibility of the comet will increase and you should be able to make out the tail, through the binoculars you will see that the tail appears quite long.

Unfortunately comet Neowise will disappear from our skies towards the end of July and it won’t be back for another 6,800 years so now is a great time to observe it.