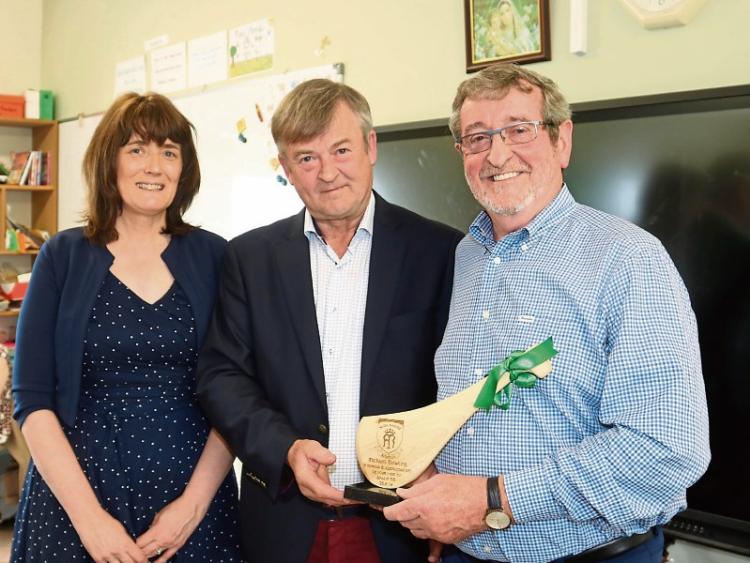 Michael Dowling, right, pictured on a visit to Ahalin NS Knockaderry with principal Brid Leahy and Vincent Hanly, board of management

HOW New York will weather the pandemic that is Covid-19 will be down, in large part, to the work of West Limerick man, Michael Dowling from Knockaderry.

Michael was asked by New York state governor, Andrew Cuomo, to galvanise the hospital sector in readiness for Covid-19 patients.

“New York is the epicentre of the problem right  now, and has more cases than anywhere else. It is growing every single day,” said Michael speaking from his office in Long Island, New York.

“ I have known him (Governor Cuomo) a long time. He taps into me every so often to help him out,” Michael said, explaining how he came to be in the frontline of New York’s  fight against Covid-19.  “When all of this happened, he asked me and another guy to co-ordinate the hospitals in New York and to try and figure out how we can increase the number of beds. We need a lot more beds.”

It is no small ask.

At the start of this week, New York had at least 23,000 confirmed cases, accounting for 5% of cases worldwide. One in every 1,000 people is being infected, five times higher than in other parts of the US.

The target, he said, is to get every one of some 150 hospitals in New York to increase capacity by 50%.

“We are making available 15-20,000 beds,” he explained. They are also, he said, looking at places other than hospitals to put patients If and when the volume increases beyond hospital capacity.

But, Michael  pointed out, increasing capacity to meet emergencies is not something new. “We do this on an ongoinig basis when we have a big spike. We are able to adapt very quickly.

“Putting beds together is easy,” he continued.

“I know I can make an extra 2,000 beds available relatively easily. The issue is to make sure you have the right staff.”

He is pleased with the response to the call-out for retired medical and healthcare workers or those who have switched to other sectors to come and help. But he acknowledged there has been a problem with supplies such as masks, ventilators and protective clothing.

Read also: Former University Hospital Limerick nurse who wants to be On Call for Ireland can't get home

“It has been a challenge because a lot of the stuff was made in China and all of that got disrupted.  But we are resolving that. We are going to other places in the world to find more,” Michael explained, and he is confident they will be able to accommodate everyone.

He is unequivocal that social distancing and closing down businesses - shops, schools, universities, pubs,  restaurants, gyms, salons - was the correct decision.

“I think it is one of the best things you can do to prevent the spread of the virus,” he said. “Having people working from home is important.”

He is not fazed by rumours that policy may change when the 15-day nationwide state of emergency ends.   “I know the White Houses gives conflicting messages. I don’t spend an awful lot of time worrying about it or listening to you know who,” Michael declared. “I listen to the Public Health People,  I focus on the facts.”

But he admitted the lockdown has had its consequences. “New York has been pretty much shook. You don’t see anybody moving much. It is a whole different place.”

“Do people like it? No. They don’t like it.  People are frustrated with the inconvenience,” Michael continued.

But the overall mood is “pretty positive”, he said, and the attitude is “this is something we have to do if we are to survive”.

“You get pockets of complaints but that is normal.”

The big question is, will the systems in New York be ready for the big surge?

“We are ready,” Michael declared. “We are in pretty good shape. It is around the clock. It will put lot a lot of strain, a lot of pressure on the system. We have a pretty good record. People adapt. People are creative.”

Michael acknowledged too that Covid-19 is having, and will have, a big economic effect.  “Every budget, every hospital budget is going to be affected. But that is what you have to do,” he  continued.

Michael also believes the pandemic will have a profound effect on the future.

“I believe every business will change the way it operates. I have 40,000 people working from home. When this is over, I will probably have more people working at home than I ever thought possible. It changes the way you think about things,” he said.

Michael is in regular contact with his family in Limerick and other parts of the country. “Ireland is making the right decisions, doing all the things that should be done,” he commented.

“You do what you have to do. Keep calm.”

Michael Dowling is chief executive of Northwell Health, which has  23 hospitals, over 750 outpatient facilities and 70,000 staff. He previously worked as health secretary for the State of New York. He is a graduate of UCC, is on the board of Smurfit School of Business in UCS and is also involved with UL. In 2017, he was Grand Marshal in the New York St Patrick’s Day Parade and has been named as one of the top 25 health professionals in the US.