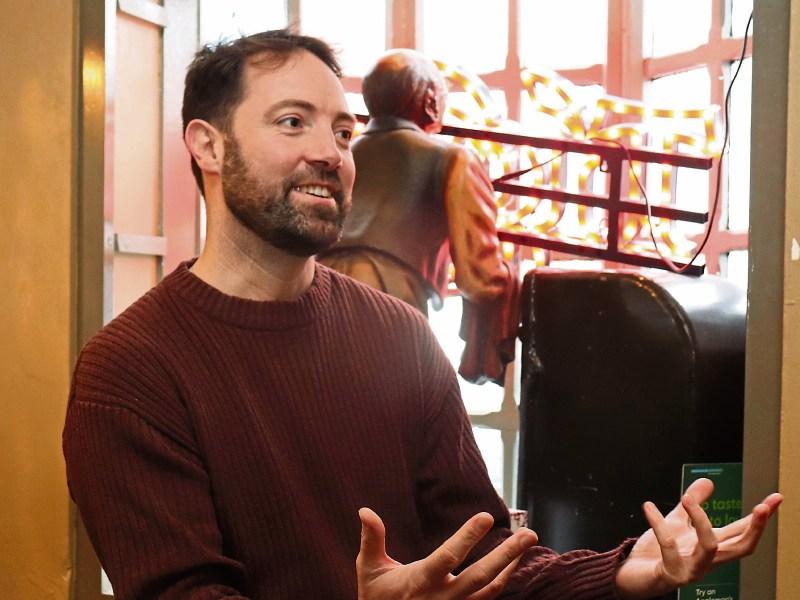 The Green Party’s breakthrough Limerick TD gives his first in-depth interview since election ahead of sitting of the 33rd Dail - Picture: Michael Cowhey

FOUR WEEKS ago, a determined engineer marched door-to-door, vying to gain the public’s trust for a second time in just eight months.

Amid the inconvenience of a snap election, combined with the weight of damp conditions, a resolute 40-year-old Brian Leddin relied on his modestly sized canvass squad to re-introduce himself to the electorate.

In that short space of time, the plan was to get the Led out and become Limerick’s first ever Green Party TD — a goal that proved unsuccessful on numerous occasions since the late Eric Sheppard in 1997.

And despite the strenuous efforts to claim that historic seat, Brian ironically found himself forgetting to tell people at the door that he was, in fact, a councillor.

But it will be hard to forget his newly-acquired ‘Deputy’ prefix this Thursday when he strolls into the Dail Eireann chamber for the first time, facing the bewilderment of having no Government to tackle or take part in.

“Yeah, I need to get used to it. But even going for the council was something I never thought I would do,” Brian says, almost lethargically relaxed while leaning against a cosy corner in The Glen Tavern on this Friday morning.

And it was a tight race, too. A two-day marathon that saw the political wunderkind beat a popular former mayor, senator, veteran TD, and Cllr Frankie Daly, who had been dubbed ‘King of the North’ after a sensational victory in the May local elections.

The Leddins were originally among the big players in trade union activism 100 years ago. But his family is now predominantly known as one that has led this city since his granduncle Michael Keyes was elected to the Dail in the 1920s.

But even after joining the Greens in 2017 and sitting on a strategic policy committee as a non-councillor, it did not dawn on him that he would run for the elections.

So instead of looking to follow in the footsteps of his folks, Tim and Kathleen, both former mayors, he decided to get involved in groups to “improve life in Limerick”.

He’s the party’s energy spokesperson and is a qualified engineer with an additional degree in renewable energy system technology. It was this educational attainment that drove him to be politically active.

And he says the so-called Green Wave should not be mistaken for a fashion or fad. It’s a real thing, he says firmly.

But was it just that? Surely, the Leddin coat of arms contributed to his victory?

“Of course. There is no question, massively.”

And there’s Kathleen, the matriarch, her support carried a lot of clout, imaginably.

“In her political life, she was very well known, but she still is. Like any elderly person in Limerick, she is very connected and knows the city and its people very well. She was a huge help.”

And even though she was an Independent, he reckons there’s a touch of Green to her, like many people her age.  “They think about good maintenance. They think about doing things well and sensibly, and not spending money in a very frivolous way. They don’t believe in wastage. That’s all very Green, but they wouldn’t label themselves as Green,” he explains.

He adds that their ethos is also about rediscovering the “good things” in life; the way we use things; the way we help one another; the community focus; how we get around the place.

But while he will be looking to rediscover some of those halcyon days, Limerick’s newest legislator faces the daunting task of fixing big picture issues, such as implementing the Government’s climate action plan, the housing problem, and the nauseating trolley crisis.

On the overcrowding issue, he supports the proposal of his colleague Cllr Sean Hartigan to provide an “emergency fund” to provide more beds at University Hospital Limerick.

Deputy Leddin takes issue with the lack of in-house expertise in Limerick City and County Council, saying that there is no urban designer nor is there a transport planner.

“There may be people with those credentials but they’re not there making the key decisions or on the key projects.

“Since joining the council, you can see there are obstacles there in how they do things. There is probably a lack of in-house expertise. It’s not that a local authority should be doing everything in-house. There’s certainly a case to farm out detailed design work to experts. Absolutely. But you have to have multi-disciplinary expertise in local authorities,” he says, adding that we are relying on Dublin officials to make decisions about Limerick.

Arguably the biggest project to be greenlit by the council since his election in May was the O’Connell Street redevelopment plan. However, Deputy Leddin excused himself from this topic as he was an employee of Arup, who is involved in the project.

In fact, at the time of this interview, he is still an employee.

“I have to respect that, and that was my approach all the time; to respect my employer, and also to fulfil my role as a councillor as best I can.”

But he says it’s not about creating a “pretty city centre”; it’s about “creating an equal and fair city. One where people have good homes to live in, good communities to engage with. Good amenities around them to avail of”.

But the Green TD acknowledges that thousands of his new constituents continue to live on the fringes, many from the country’s most deprived, unemployed blackspots. He says “it has to be our priority” to solve the problems in these areas.

He adds that while, for example, crime in Regeneration areas is not as acute as it used to be, “that’s not to say there isn’t huge disadvantage in Limerick city and huge inequality”.

In our general election questionnaire, Deputy Leddin was one of few to be in favour of extending night club opening hours, lowering the voting age to 16, and decriminalising cannabis.

Leddin echoes his party’s policy to decriminalise cannabis, saying this can be made a reality if the majority of the 160 TDs agree.

“If they want fewer people abusing drugs, then they need to think differently to what they are doing at the moment, and look to evidence from other countries. It is the case that decriminalisation leads to less abuse of drugs. We should consider it seriously,” he explains.

On opening hours, he says there are problems associated with closing hours where people “spill onto the street” when this is not the case in other countries with more relaxed laws.

“I don’t believe that the Government needs to protect the people from themselves. In fact, trying to do that, they are creating further problems. I think people are responsible, by and large.”

Regarding lowering the voting age to 16, he says “the argument is you can get a job when you’re 16 and you can pay tax”.

When Brian was elected to the council and the Dail, there was someone special next to him on both occasions. And that was his girlfriend, Ester.

“Ester is a wonderful woman who I met a few years ago. She’s studying in the art college. Very talented and very warm and kind. She’s what everybody should look for in a partner. Someone you can trust and love and care for and have this strong mutual connection,” he says of his girlfriend.

Though he has time for the musings of Leonard Cohen, he doesn’t for Netflix or movies. And it seems he certainly won’t either over the next few weeks, as the Greens face the likelihood of forming part of the next coalition.

“The problems that the country and the world are facing are far too great to make this about the past or about personalities.

“I think people are getting caught up in the drama and we just have to keep that threat in front of us. And if we’re serious about that, and we really believe that it’s a fundamental threat to our existence, which it is, and I know it is, then we have to get over these issues that we have with each other.”