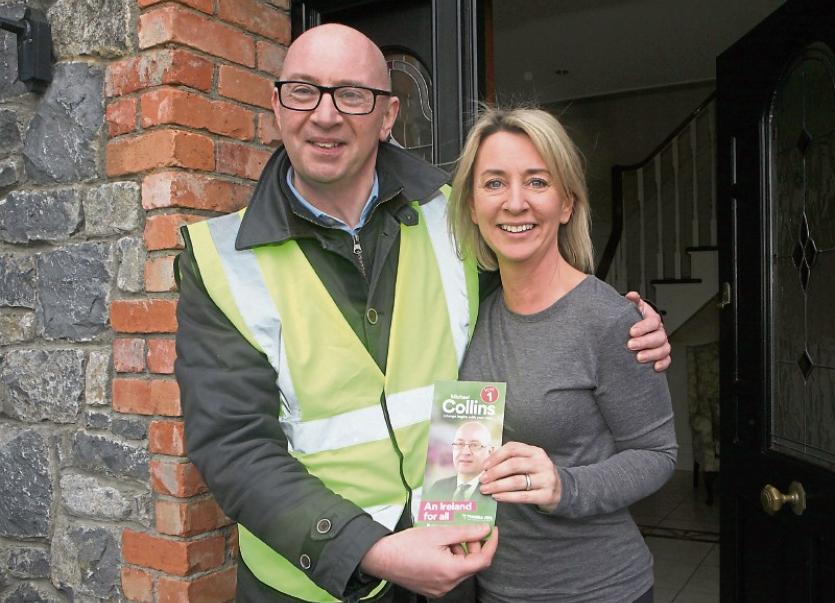 Cllr Collins meets Eileen McMahon on the canvass. He is going with the recyclable leaflets, but not posters

FIANNA Fáil candidate in Limerick County Cllr Michael Collins is sticking to his green principles and going poster-free in the general election.

And, he says, he has received a lot of support for his stance.

Although he has stood in the local elections several times, this is Cllr Collins’ first time on the general election hustings. He was added as the second candidate for Fianna Fail in Limerick County last week.

“I made the decision to go poster-free for the local elections last May and was overwhelmed by the encouragement and support that I was given by community groups and climate activists,” he said this week.

“It also proved that it’s possible to run a successful election campaign without littering the local area. (Cllr Collins got 2,193 first preferences in the local election, coming in just after poll topper Cllr Jerome Scanlon).

“I was one of the first candidates to sign up to the poster-free campaign last May and following on from that engaging and enthusiastic campaign I will be continuing to canvass without posters in the General Election,” he added.

“Climate action is one of the big issues in this election and there is a perception out there that rural Ireland doesn’t want to make the changes necessary to deal with our climate emergency,” he continued. “That’s simply not true.  People have been talking to me about the measures they’re taking to make a difference.

“I am also playing my part and going poster-free is just one small step that I am taking during this campaign,” he said. “I have always been a firm believer that there is no better way to campaign than to meet with people and I will be spending the next two weeks out and about in the constituency listening to their concerns and proposals”.