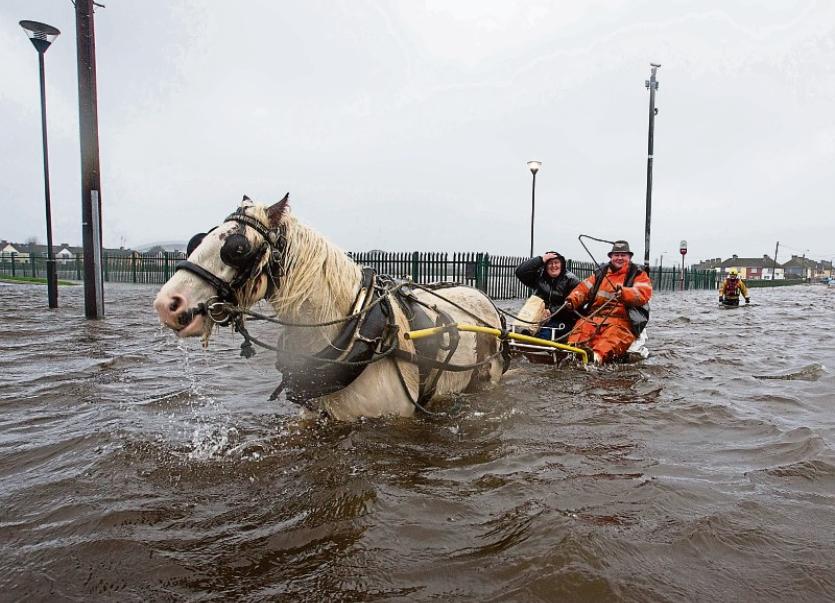 Gerard Hogan and his horse Peg transporting a volunteer from Limerick Animal Welfare during the flooding of 2014 | PICTURE: Sean Curtin

ALMOST six years after the extensive flooding in the King’s Island area of Limerick city, an application for flood defences has finally been made.

The Leader can this week reveal that the local authority has applied to An Bord Pleanala for flood defences around the King’s Island, a move welcomed by local councillor John Costelloe, who described it as “vitally important to the community”.

It was way back in February 2014 when unprecedented flooding hit the community after high tides caused massive damage to homes and property in the greater Kings Island area.

It saw the army called in, scores of people evacuated from their homes, with many people close to the Shannon seeing their home and possessions destroyed.

Since then, sandbags have been piled up around the estate – but Cllr Costelloe says locals still live on their nerve.

“The simple fact is, the waiting is killing the residents at the moment. People are wondering when it's going to commence. The bank is still deteriorating, and people are very frustrated. We need work to commence as soon as we can. It's very hard going,” he said.

Despite promises from the government at the time, it’s only now a formal application has been made to the national planning authority.

These plans have been put together by Arup Consultant Engineers, and will see the area split up into two areas on the north and south of the estate, which will see different developments.

In its submission to An Bord Pleanala, the council wrote: “A major improvement to the existing temporary flood defences is required around the entire island to reduce the frequency of extreme events which inundate the island.”

Flood Cell A includes the northern, more residential and agricultural part of the King’s Island which currently already benefits from a level of flood protection.

While Flood Cell B covers the southern and more commercial part of King’s Island.

It will be this area which will consist mainly of new flood walls, many of which will include glazed flood defence elements, constructed on top of the historic quay walls, which will be carefully repaired and strengthened.

Cllr Costelloe added: “Why it's taken so long, I do not know. Too much red tape yet again. They have the funding, let them put their money where their mouth is and get moving.

“We need to see work commence as soon as possible. I feel residents have been very tolerant. They've been stuck in limbo since 2014,” he added.

An Bord Pleanala is scheduled to make a decision on the flood walls project by mid-way through June this year.