“Worst flooding case I have seen”: Brian Hayes on Limerick 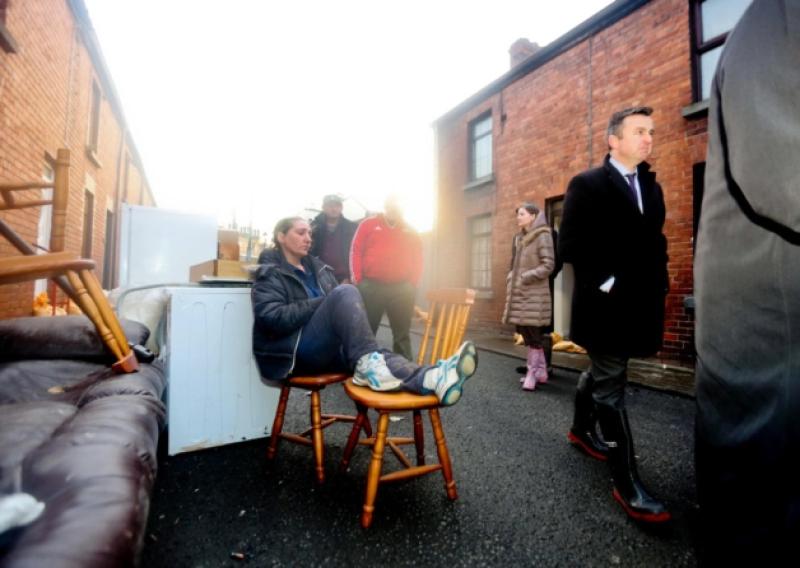 MINISTER Brian Hayes said the flooding in Limerick is the worst he has seen in the country, and agreed that a “humanitarian crisis” exists in the city’s northside.

MINISTER Brian Hayes said the flooding in Limerick is the worst he has seen in the country, and agreed that a “humanitarian crisis” exists in the city’s northside.

Hundreds of residents in King’s Island affected by the worst floods in living memory can avail of a national €10m flood relief fund, though Minister for Finance Michael Noonan has pledged that additional funds will be made available if necessary.

“I’m in this job three years and have seen maybe 15 cases (of flooding), but nothing as bad as this. This is the worst case I’ve seen, given the concentration of flooding, covering about 300 houses. This is a very acute situation,” said Minister Hayes, OPW.

As hundreds of residents watched their worldly possessions being dumped into skips this week, Minister Hayes promised: ““We’re committed to this community in the days, weeks and months ahead because this is a big job in front of us all here, to get the best possible solution.”

“Of course, people are traumatised, but they want to see the Government and local authority working with them and we’re committed to doing that. The people here are facing an appalling situation, that’s why we all have to put our shoulder to the wheel. It’s really important that all the local authorities and the national agencies work together on this. I don’t want to see any bickering on this. We’ve a task to do here and we all have to measure up to that task,” he said.

He added that the State has to ensure that “people in this area never, ever have to go through this appalling situation again”.

As he and Minister Noonan were met with angry and upset residents on St Ita’s Street in St Mary’s Park this Monday - 48 hours after the floods hit - the Limerick minister tried to reassure the crowds.

“We know how much you suffer, but we must move on and try and fix it,” he said.

He added that they will do “everything we can”.

One woman, whose home was destroyed in the floods which ravaged the most economically vulnerable part of the city, shouted above the crowds: “Are ye still charging for water? We can sell it to ye now instead of ye charging us.”

With further high tides expected this week. the Minister said immediate measures will be taken to strengthen flood defences, along with long-term preventative measures.

“I think we all now believe in climate change and must make more provisions for higher tides. The defences that are here, with the new climates we’re having all around the world, are no longer adequate. We’ll put in temporary defences in the next week or so, and permanent defences so that when high tides come again they’ll have a meter and a half extra,” he said.

In a statement released to the Limerick Leader, the ESB said that water has been released from Parteen Weir every day since Christmas day, but added that it “does everything within its power to alleviate the worst effects of flooding along the entire Shannon” and is in constant communication with local authorities.