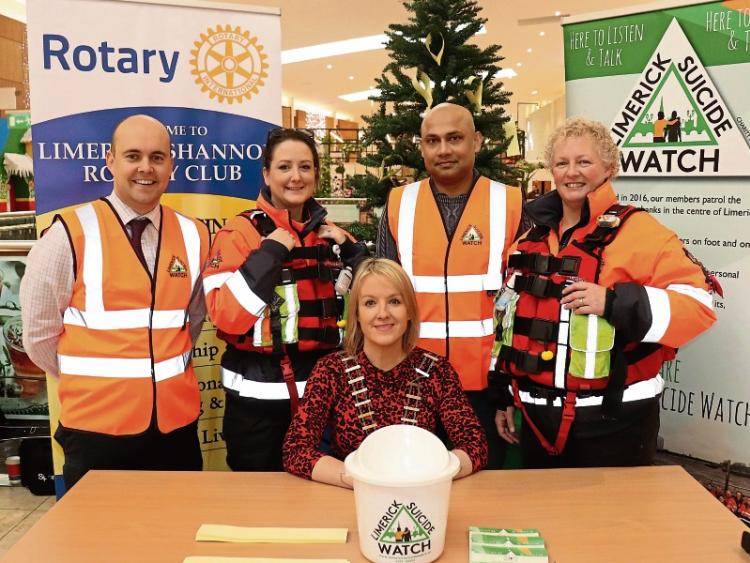 Daphne Greene in her role as president of the Limerick-Shannon Rotary Club with members of the Limerick Suicide Watch team John Hinchy, Yvonne Cook, Akam Husan and Lucy O’Hara

Tell us a little about the Greenhills Hotel

The Greenhills Hotel was established in 1969 by my father Bryan. It was a greenfield site at the time, bought from the Casey’s, who are still trading across the street from us. The three-acre site was considered the county at the time. It started as a small seven to eight-bedroomed hotel with a grill room and nightclubs. Over the years, if you go through the 1980s, we had dance bands, the likes of Phil Lynott, Colm Wilkinson play here. After that, we got rid of the nightclub and put more emphasis on the hotel background: conference, banqueting, weddings and events. Today, we are 60-bedroomed with conference facilities for 450 and banqueting facilities for the same. We have a health and leisure centre with over 900 members. We have built up a reputation for good food, good service, personal service, and the Greene family are still involved. On and off, we would go from a minimum of 50 up to 65 seasonal workers.

I am general manager of the Greenhills Hotel. That role entails the general management of the whole hotel. You’d be working and overseeing every department from the leisure centre, and how it runs day-to-day and its profitability, to housekeeping, food and beverages, accountancy. You have to have a big business knowledge. You have an active hand in sales – you’re the person who pulls it all together. The buck stops with you.

I was born and reared in Kildimo. I’ve lived for the last 10 years in the South Circular Road. I bought a place and renovated it. I love that area.

​I went to Kildimo National School. From there, I attended secondary school at Laurel Hill FCJ for three years. For my Transition Year in 1989, my parents decided to send me to Germany to learn a language. I lived with a family out there and became fluent in German. When I returned, Laurel Hill unfortunately didn’t offer German as a language. So I went to Crescent College, and I did my Leaving Certificate there. I went from there to study a degree in economics and politics in Trinity College Dublin.

You are president of the Limerick/Shannon Rotary Club for the year. How did you feel to be given that role, and what do you hope to achieve while in office?

I’ve been a member of rotary, which is an organisation which regards service above self for the last 12 years. There comes a time in every club or group that you have to step up. I was asked, so I felt it was maybe time for me to do that.

It’s busy. Anything which you do on a voluntary basis outside your own job is always going to be busy. I like to do things to the best of my ability.

Already two Sundays ago, we ran a very successful luncheon in aid of the Children’s Grief Centre. We raised in the region of €6,000 for the centre, which is fantastic.

Between December 2 and 8, we will have our remembrance tree at the Jetland Shopping Centre. The funds for that will go Limerick Suicide Watch for a project they are trying to get off the ground in relation to uniforms and mobile units. It’s a project-specific driven event.​

Read also: Limerick city traders not happy over being left in the dark


How did you get to where you are today?

The family business was always in the blood. I grew up with it. We all had part-time jobs whether it was here or in the Unicorn, or in town, from the ages of 12 and 13. Going to college and working jobs outside college, I realised after a while that regardless in life, you’re going to work very hard – so you may as well be doing it for yourself.

Obviously, there are lot of pros and cons to that! While some people it is great to work for yourself, it has its pros and cons.

You’re never off, and you’re always thinking about it, even if you’re not on the job. Your phone and emails are never off. But that’s the sacrifice you pay to work yourself. I worked my way up from accommodation, making beds. I did that for a whole summer. Each summer, I’d have worked in waitressing. I’d have bartended, I would have been a supervisor, a duty manager and worked through all the departments.

We’ve just completed a big refurbishment in our open bar and restaurant area. Last year, we completed a €600,000 development between our function room and suites. We’ve also completed a number of bedrooms. It’s constant reinvestment in the product to try and make it better. We earned our four-star accreditation last year and when you get that, you need to work on keeping it, maintaining it, and making it as good a business as you can.

I have great admiration for everyone who runs their own business as I know the sacrifice that it takes in anybody running their own company. A lot of the time, I feel women have to work twice as hard to make a name for themselves then men do. It’s tough old business, there are huge sacrifices – there’s no such thing as a 9am to 5pm, there’s no such thing as a phone being switched off!

Be firm, be friendly, but always be fair.

For years, I played lots of tennis. I haven’t had time of late, a number of years ago I had an injury. But it’s something I’d love to get back to. I enjoy a bit of pilates., as well as meeting friends and going to the cinema! I like to travel if I am able to also, – whenever I can fit it in!