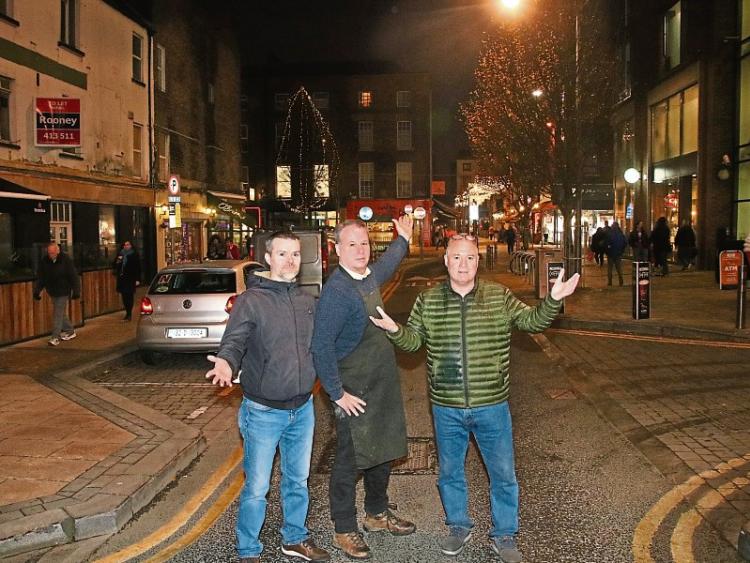 Brian Halpin is flanked by Brian Kiely and Pat Franklin. Catherine Street is in the dark, but in the background, Thomas Street and Little Catherine Street are lit up - Picture: Adrian Butler

It's beginning to look a lot like Christmas, except on Limerick’s Catherine Street, that is.

The owners of a number of businesses in the area are irate that Limerick City and County Council has not provided Christmas lights for the street.

The group comprising everything from multinational coffee chains to one-man operations signed a petition which they sent to the local authority. But that, along with numerous other representations on the issue to the council, has received only one response.

That being: Catherine Street is a side street, and as such, does not get lit up by the local authority at Christmas.

The shop owners point out however, that other side streets in the city, namely Thomas Street and Little Catherine Street have been given Council lights.

Brian Halpin of La Fromagerie cheese shop told The Leader, “We’re paying tens of thousands in rates between us and we’re getting nothing, not a single bulb.

Catherine Street is referenced in Limerick’s 2030 strategy as one of Limerick’s “main streets”, which along with O'Connell Street and Henry Street, is to “be transformed”. It is also prominently referenced as part of the fashion quarter on the Council’s own website highlighting Limerick’s shopping attractions.

Mr Halpin said, “Retailers rely on this time of year to significantly increase their annual takings and any measure to enhance this is very welcome.

“Any shop owner will tell you that Limerick city centre is slowly dying with more shops closing by the week as the council appears to be asleep at the wheel.

“Apparently, lights on O’Connell street, a few token side streets and a mediocre tree is the only gift that hard pressed businesses in Limerick city centre are getting this year.”

Limerick City and County Council had not responded to a request for comment by the time of going to press.