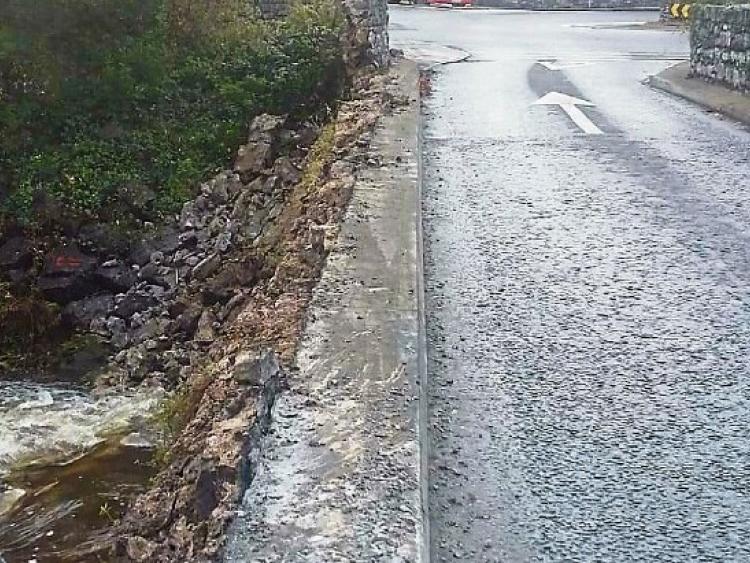 THE lorry-driver who struck the Bridge of Tears in Newcastle West, causing one entire wall of the bridge to collapse into the river, looked at the damage he had done and then drove away,  councillors were told this Wednesday.

This was the “most disturbing”  and “alarming” aspect of the incident, Ger O’Connor, senior executive engineer for the Newcastle West district, told the councillors.

“The incident is the subject of garda investigation and I am not at liberty to say more,” he said.

The incident occurred about 8.30am on Monday morning, he explained, and the parapet on the eastern side was “obliterated into the river”.

He expected contractors to begin repair work this Friday or next Monday at the latest and he expected the job  to take “at least two weeks.”

The council had mobilised as quickly as possible, he told the councillors. The road was closed off and diversions put in place and a contractor was on site by the following day.

The accident had knocked out public lights in the vicinity but the ESB were on site this Wednesday to resolve this and ensure lighting for the pedestrian crossing, he added.

The bridge is a main conduit from Newcastle West on to the Bruff Line, the regional road  going to Kilmallock and Charleville and also serves traffic to Castlemahon, Broadford, Feenagh and Dromcollogher. The  closure of the bridge has led to severe traffic congestion in the  town with tail-backs of up to three miles reported on Monday evening and long delays at peak times since.

“It has caused huge chaos in traffic flow in the town,” Cllr Michael Collins said at Wednesday’s meeting.

“It has highlighted one thing, the need for a distributor road in Newcastle West.”

Both he and Cllr  Jerome Scanlon raised concerns about articulated trucks trying to turn at the designated diversion, closer to the town centre. They were also concerned that trucks were turning off before the town and using a small, narrow country road, known locally as Wood Road, to try and avoid the town.

“We spent massive money on that bridge a few years ago,” Cllr Liam Galvin said. “It is only fit for a car. It is not fit for articulated lorries albeit they get through there. That was said when the bridge was being rebuilt. It should be knocked and widened. It serves two very busy roads.”

Mr O’Connor was unable to say, at this stage, how much the repairs to the bridge would cost.

The Bridge of Tears is believed to predate the Famine and was given the name as it was the point at which departing emigrants made their final farewells before heading for the emigrant ships.

Extensive work was carried out at the bridge and a new, second bridge added, following the flood in Newcastle West in August 2008.