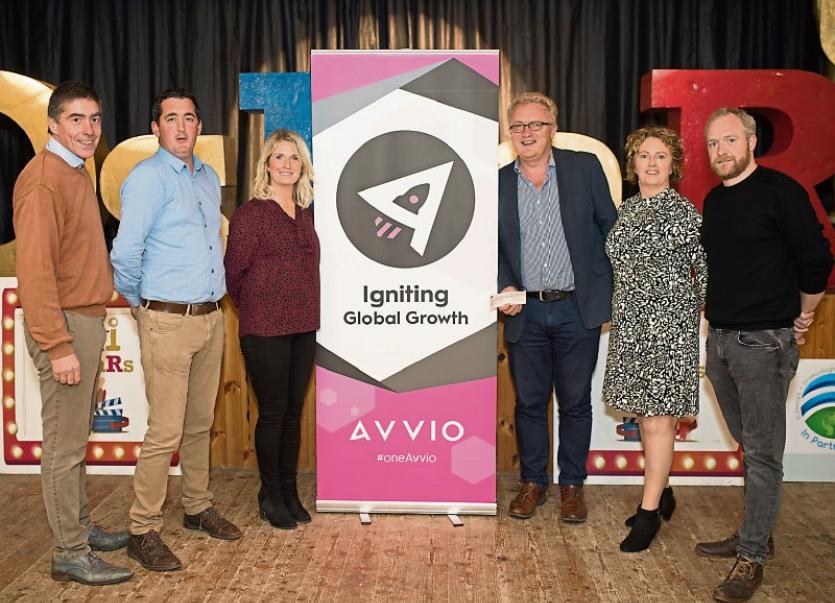 Committee members Mike Pierce, Tommy Cregan, Lillian White, Marion O'Brien and Eoin Barry were pictured with Seamus Holmes, Avvio, at the launch of A Night At The OsKaRs

BROADFORD has become the new Hollywood and the community’s  Night at the OsKars has uncovered a rich seam of talent in the area, drawing in almost  100 people either as cast or crew members in making their own versions of seven iconic films.

Now, just a week before the red carpet is rolled out, the  trailers for the films are playing up an online storm and have already clocked up close to 30,000 hits.

Online views of The Field alone were heading towards 10,000 at the weekend while Fr Ted had clocked up close to 3,500 views just 18 hours after being posted.

The other films Sister Act, Calendar Girls, Forrest Gump, The Wind that Shakes the Barley and Finding Ned are also drawing audiences as they go up  as well as garnering compliments for the standard of what has been achieved.

Above all, the trailers are building a hugely positive local and national profile for a community that already has a mighty reputation as a place that gets things done. But the OsKars have  also succeeded in tapping into a deep seam of community involvement and creative fundraising, drawing in large numbers of young people into the community-wide effort to raise funds to refurbish the Community Centre and creating great fun along the way.

It all began with a small meeting a number of months ago when the challenge of raising funds to upgrade the hall was the main item on the agenda. Once the idea of the OsKars was agreed, there followed an information meeting in the hall with the  Dublin based Kevin Rowe Events after which auditions were held, and people were assigned to their roles. Rehearsals took place all through August and filming took place over two weekends in September, after which the many hours of filming were edited down to ten minutes per film.  These ten-minute films will then be screened on October 11 when both the judges and the audience will have their chance to vote and when a wide range of awards will be announced.

The target for Broadford’s Night at the OsKars was €50,000 and they are well on track to reach that according to Mike Pierce, one of the organising committee.. “We have a great base to start from,” he said at the official launch of the OsKars in Broadford last Thursday. . Up to that point, he said, €17,000 had been raised through the various fund-raisers and sponsorship had brought the overall figure to over €30,000.

But all that was before last weekend’s various fund-raisers and this weekend sees another round of four fund-raisers.

Seamus Holmes, of Avvio, one of the main sponsors, likened the company to Broadford in that it too was “out there punching above its weight”. “For us, at a time when rural communities are struggling with numbers and people are going off to the cities,  it is nice to see an initiative like this in Broadford,” he said. John Carroll of Weener Plastics, another major sponsor, described the OsKars as a great initiative by Broadford and said they were delighted to be involved. Ann Buckley of Mallow Credit Union said it was great to see a community coming together. .

Meanwhile, ticket sales for the big night which takes place in the Charleville Park Hotel on Friday, October 11, are almost sold out, according to Lillian White another of the organisers. They cost €25.