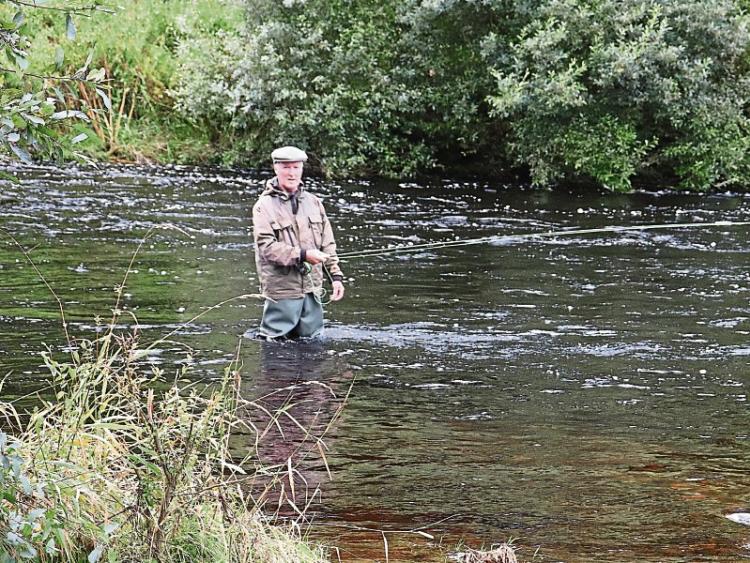 Brendan Danaher fishing the Feale this week. “We need to get to where this real problem is coming from,” he says

“I believe clean drinking water is one of the most basic human rights,” declares Brendan Danaher from Mountcollins.

But Brendan is not an aid worker talking about sinking wells in developing countries in Africa. He is a life-long fisherman and he is talking about the water that comes out of his tap, water which has, on numerous occasions over the past number of years, contained pesticides including herbicides such as MCPA.

The levels of pesticides detected, Brendan points out, are in breach of EU guidelines. This is actually admitted and accepted by Irish Water who say, however that the levels remain within World Health Organisation (WHO) guidelines.

“The problem I have with that is the EU law supercedes the WHO,” Brendan states. “Why are they using WHO guidelines when it is clear an EU guideline of 2014 is being breached. Is it convenient to use WHO guidelines?”

But the pesticides have not been confined to the Abbeyfeale water supply to which Brendan is connected. They have also occurred, Irish Water has admitted,  in the Newcastle West supply and in the Foynes/Shannon Estuary in 2017 and again in 2018. (See bottom of story for sidebar on affected group water schemes)

However, Brendan believes the breaches have been going on as far back as 2013, at least in the Abbeyfeale area. Figures supplied to him by Inland Fisheries Ireland show exceedances for Abbeyfeale going back to 2013, when one occurred . In 2014, there were four, in 2015 the number was five, in 2016

And he cites a HSE document from 2018 on drinking water which stated: “It is best for people and for the environment that the EU legal limit for pesticides is not breached at all. If it is breached, it is best that it does not continue.”

For Brendan, the real crux of the problem is that water treatment does not get rid of pesticides. “We need to get to  where this real problem is coming from.. Is it coming from roadside spraying? From agriculture?” he asked.

Irish Water has said they are monitoring all three supplies on a monthly basis.

“They are testing,” Brendan agreed. Indeed, he has met the samplers on the Feale himself. “But what does testing do. It just proves the stuff is there,” he pointed out. And for him, the big question remains:  How are they going to eradicate it?

“Irish Water has no statutory powers with regard to the management of the wider catchment area which feeds water supplies,” a spokesman for Irish Water  said. They are only responsible for water quality from “the raw water intake to the consumer’s tap” he pointed out.

But in a bid to  make sure drinking water sources are protected from pesticides, Irish Water is working with the National Pesticides and Drinking Water Action Group (NPDWAG) raising awareness and educating people on the correct and safe use of pesticides. The  action group is made up of representatives from the EPA, the HSE, Coillte, Teagasc, Irish Water, local authorities, the farming community and pesticide manufacturers and suppliers. Education and awareness is the best approach to prevent pesticides from ending up in drinking water, they say.

But Mr Danaher is not overly impressed. “They have no statutory powers,” he points out.

When any drinking water exceedance occurs, Irish Water   notifies the Health Service Executive (HSE) which will advise on any measures necessary to protect public health.

“In the case of chemical or microbiological exceedances, the Environmental Protection Agency (EPA) is also notified.

The EPA has now set a deadline for compliance for Irish Water. The Abbeyfeale scheme must be compliant by December of this year and the Newcastle West Scheme by June of next year.

But the EPA does not prescribe what measures need to be taken to achieve compliance. “That is a matter for Irish Water to assess and determine,” a spokeswoman for the EPA said.

“Once these deadlines are passed, the EPA Drinking Water enforcement team will assess compliance with the direction after the direction deadline has passed,” she added.

What happens if the deadlines are passed without compliance is not clear.  But Mr Danaher is clear about the possible outcomes unless decisive action is taken to prevent pesticides from entering water courses and rivers and ultimately getting into treated water supplies.

“There is a public health issue with the water,” Brendan maintained.

“I just cannot see why chemicals and water have to be part of our life.”

“Are we supposed to drink water on a daily basis that has elevated levels of pesticides? What does that do to the health of a person who has been drinking this water during 2017, 2018? Do we have to drink it until December of 2019 which is the proposed deadline for elimination of pesticide in our drinking water?”

But he is also concerned as an angler who has fished the Feale all his life and who is an active member of the Mountcollins and Brosna Angling Association.

The Feale, he point out, is a designated salmonid fishery, protected under an EU Directive to afford special protection to wild Atlantic salmon and sea trout.

“I believe it is a beautiful noble river, it is honoured in song and story by the Keanes, the McMahons, the Fitzmaurices, the McConnells,” he says. “It would be a great tragedy if this was lost to the next generation. It is a living ecosystem with fantastic wildlife… It is just shocking to think it could be destroyed.” And he asks: Do these fish have pesticide residue?

He knows only too well that the river has declined. “It has gone down. It is a pale shadow of the river Feale I knew as a child. But it is not irreversible.”

Persistent lobbying by the five angling clubs on the river has brought in a lessening of draught netting on the Cashen and Catch and Release is mandatory on the Feale.

“But whatever sense we have, this needs to be done.”

Newcastle West water scheme serves a 9,702 people
In 2017, there were four breaches of the EU limit.
In 2018, there was one breach and so far in 2019, there has been one breach reported.
Four of the six breaches involved MCPA, the others involved 2.4-D

Foynes/Shannon Estuary Scheme
In 2017, the EU guideline was breach once.
In 2018, there were three breaches.
There were two incidences involving MCPA, two involving 2.4-D