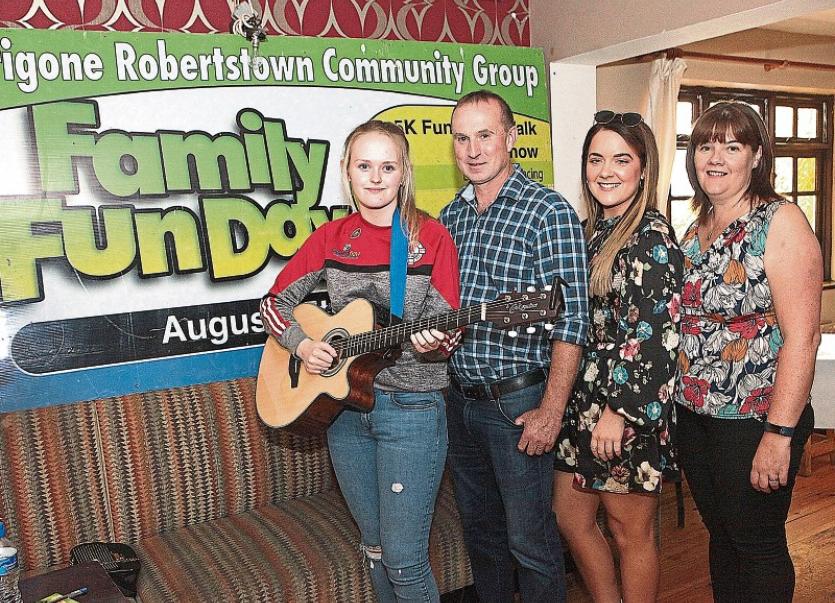 IT might not have reached the dizzy heights of X Factor, but the Voice of Barrigone has certainly attracted a lot of interest.

And those attending the launch of the Barrigone Family Fun Day at the weekend were given a sneak preview of what to expect when the final judging takes place on Pattern Day, Thursday, August 15.

“This is a new addition to the Barrigone Family Fun Day ,” explained Leo O’Shaughnessy, one of a group of 20 people who make sure this annual event goes smoothly. It is local talent for the most part who have signed up to take part in the Voice of Barrigone which carries prize money of €1,000, Mr O’Shaughnessy said. “There is a great mix of people and ages,” he added.

The Family Fun Day started off several years ago as a kind of neighbour-meeting-neighbour event but it has grown steadily since and up to 1,000 people went through the gates last year. The event has contributed significantly every year to local charities. Last year alone, some €15,000 was donated to help a local man with acquired disabilities  and hopes are high that this can be matched this year when the Butterfly Club will benefit.

The day begins at 3pm with Mass at Barrigone Holy Well, dedicated to St Muirdebhair the Wise.  But the practice of paying the rounds, where pilgrims circle the well saying prescribed prayers seven times, continues throughout the day.

Then at 4pm, the field, just off the N69, will  open to the public offering all sorts of entertainment. There will be a 5k run or walk with trophies for the winners, a Vintage and Modern Tractor and Car Run, and a five-a-side soccer tournament for the Pat Kelly Memorial Cup which has attracted a lot of teams.

In addition, there will be tag archery for children, bouncy castles, and a Children’s Treasure Hunt.

One of the highlights of the evening is expected to be lawn-mower racing, but only those with ride-on mowers can take part. There will also  a Craft Fair with stalls, food wagons and a bar.

The Voice of Barrigone final will take place in a big marquee with judges Clodagh Lawlor and Davy Mann.

Admission is €5 but tickets will be entered in a grand raffle and children will be free.

Meanwhile, locals are carrying out a big tidy-up at Barrigone Holy Well in advance of the feast-day. Traditionally a big “pattern day”, in the past bonfires lit up the night-time sky and celebrations continued throughout the night.

The claim is that St Muridebhair baptised new Christians at the well and legend has it that the water from the well would not boil and if your plea was granted, you would see a trout in the well. The well is also reputed to cure many illnesses.

One of the most interesting stories connected with the well  tells of a young girl who was emigrating to America. Before she left, she took some pebbles from the well. During the journey across the Atlantic, a fierce storm occurred and the girl threw the pebbles into the sea. The storm abated and the pebbles returned to the well.