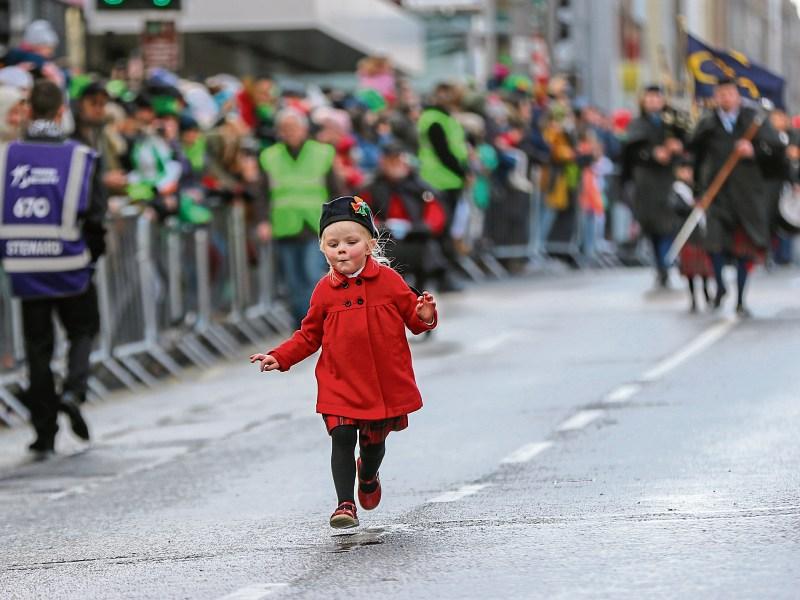 A youngster skips away from her band at this year's St Patrick's Day parade in Limerick PICTURE: KIERAN RYAN-BENSON

A CROWD estimated to be around 32,000 people were in Limerick today for the city’s annual St Patrick’s Day celebration.

The colourful parade featured around 70 different participants and floats showcasing some of the most creative aspects of Limerick life.

Despite chilly weather, which no doubt affected the attendance, there was a splash of colour from all the entries involved.

There was excitement in the air as award winning street performing groups Lumen Street Theatre and Artastic entertained onlookers.

A tickertape parade got the party into full swing, with Dr Norah Patten, who is bidding to be the first Irish astronaut, leading the parade in O’Connell Street as Grand Marshal.

Dr Norah, who is a former student at the University of Limerick, said: “The whole thing has been fab. It’s so exciting. It was raining when I was coming up, thankfully its stopped. I’ve spent 13 years, and this is a massive huge honour for me. I’m really thankful for this.”

She was followed down Limerick’s main thoroughfare by the army flag.

Other highlights of the parade included the now-legendary giant tricolour flag..

There were appearances from a number of local brass bands, including Limerick’s oldest group, the Boherbuoy Brass and Reed Band, while there were also colourful entries from the Limerick Filipino Community, Munster Martial Arts and Siptu, who led an entry highlighting the fact it’s the 100th anniversary of the Limerick Soviet.

Mayor James Collins joined Dr Patten at the head of the parade.

He said: “There are great crowds here to support us. We had the fireworks last night which were fantastic. It’s a day to celebrate being Irish and its a day to support the kids taking part in the parade.”

The fun continues tomorrow lunchtime with the International Band Championship, which kicks off at 12noon.

The kids from Munster Martial Arts show us their moves! @LimerickStPats #StPatricksDay pic.twitter.com/zBqghWMAmJ

What a fabulous afternoon ☘️☘️ thank you so much #Limerick for the huge honour of being Grand Marshal keep shooting for the stars ✨ https://t.co/RkGm0zajVz