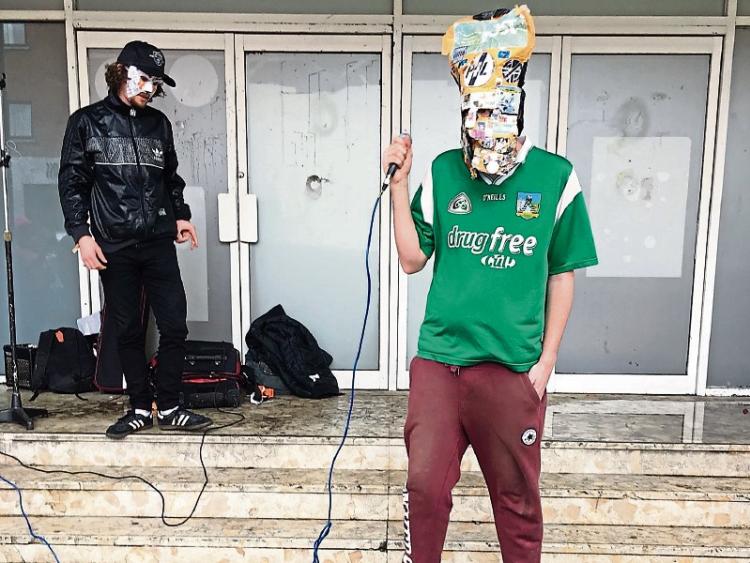 AN impromptu gig has been held at the old Dunnes Stores building in Sarsfield Street in protest at the lack of action on the site.

Well-known local musician Post Punk Podge joined a number of activists outside the doorway of the riverside site for the ‘guerilla gig’, while there was a collection for homelessness charity Novas.

“We are taking a stand here today, pointing out the waste which is left here. There are homeless people bedding down here regularly, a couple of nights a week, and nothing is being done about it. It’s prime land. A lot of people feel it could be turned into an arts studio or music studio. They’ve done that in Cork, with an abandoned FAS building. Nothing has been done with this for over a decade. It’s just crazy,” Post Punk Podge said, “We are showing defiance here, showing we are fed up with it.”

Post Punk Podge said his group will also target other unoccupied buildings to hold gigs in.

Social Democrats local election candidate Kieran Walsh was a member of the old Limerick City Council when the Sarsfield Street site was last in use, back in August 2008.

He said: “It’s a disgrace it’s left like this. It’s city centre property. It’s prime retail, it’s primed for an artist hub here. I think the Heffernan family need to do something about this. There are talks of opening one unit here for a charity shop. That’s not good enough, not nearly.”

He suggested a cinema, or bowling alley could go on site.

“When you look where it is, it’s right on the river. It’d be a massive tourist hub. There is no doubt about it, Dunnes Stores are playing silly beggars now. I’m asking Dunnes to do the right thing by the city. The people of Limerick have always been good to Dunnes, so it’s time for payback now,” Mr Walsh added.

These guys on the street #Limerick
Come on Dunnes sort out this building - don't be so selfish
@DunnesVacant @dunnesstores pic.twitter.com/7fTz3lfaXt

Labour election candidate Anne Cronin, who has led a campaign to force Dunnes Stores’ hand on the vacant site, said: “It’s great. It’s another opportunity for people from Limerick to highlight the blight this building is on the city. People aren’t going to give up  The night we had the campaign meeting, this was brought up, that local musicians and artists could highlight it in their own way. This is a great way of doing this.”

Ms Cronin, who also works for Novas, added: “We’re not going to stop drawing attention to this. It’s people power and today is another example of that.”

Earlier this year, it emerged Limerick City and County Council had offered the retail giant €3m for the site. This formed a key plank of the firm’s objection to a move to have the building placed on the vacant sites register.

Dunnes Stores has long been accused of ‘hoarding’ the site.