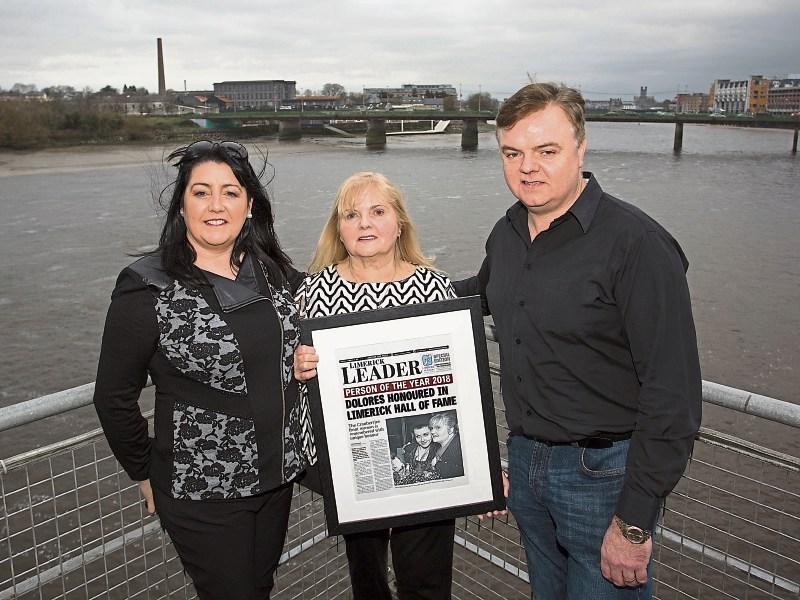 Dolores O’Riordan was honoured in the Limerick Person of the Year Hall of Fame; pictured are her mother Eileen, centre, and brother PJ and PJ's wife Sandra Picture: Alan Place

“A VERY proud Limerick woman right to the end” is how PJ O’Riordan described his late sister Dolores after she was inducted in the Limerick Person of the Year Hall of Fame.

Details of the new honour were announced at the Limerick Person of the Year awards.

PJ, who attended the awards last Thursday at the Clayton Hotel with his wife Sandra and mother Eileen said the award was something very special to honour the memory of the late Cranberries lead singer.

“It’s a huge honour to be here for her induction into the Limerick Hall of Fame. Dolores was a very proud Limerick woman right to the end. Anyone who might have doubted that at any time need only to listen to any of her songs, you’ll hear that fine County Limerick accent, something her fans and music critics remarked upon.

“It’s a pity she wasn’t here last year to witness the Limerick hurlers' All-Ireland win. She was a huge hurling fan all her life, not many people realise that. She is with us in spirit and I’m sure she would be delighted with this induction and she’d be very proud with this,” concluded PJ of his sister who hailed from Ballybricken.

Dolores’ mother Eileen was presented with a special edition framed front page of the Limerick Leader at the awards ceremony at Limerick’s Clayton Hotel on Thursday afternoon.

The Limerick senior hurling team were named the Limerick Persons of the Year at the ceremony. The Cranberries song Dreams of course played a key part in the celebrations at Croke Park at the final whistle on All-Ireland hurling final day, August 19.

And the song was played out loud again over the speakers at last Thursday's awards when the hurlers were announced as the overall winners of the annual award.

Health campaigner Vicky Phelan was also honoured at the awards with a Special Achievement Award,.

Now in its 18th year and sponsored by the Limerick Leader, Southern Marketing Design and Media and the Clayton Hotel and supported by Limerick City and County Council, the Limerick Person of the Year Award was set up to honour the achievements and success of local people.