WATCH: All Ireland winning hurlers given Limerick Person of the Year award 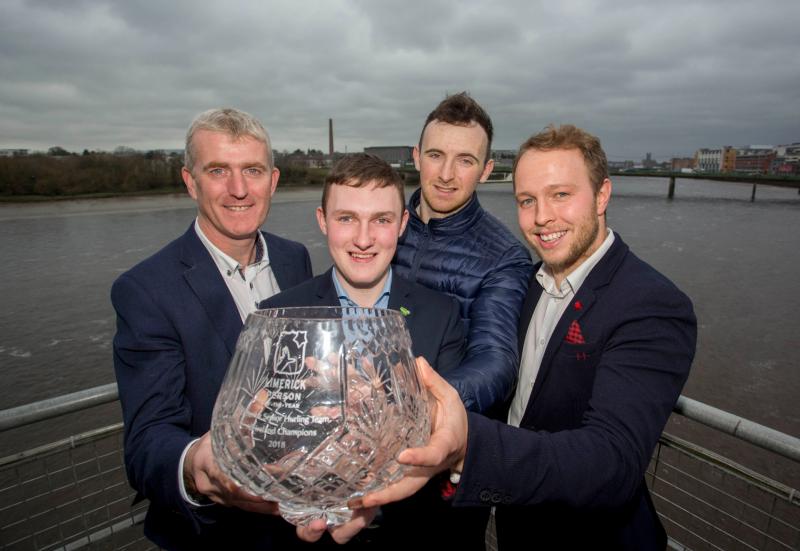 THE All-Ireland senior hurling champions have been named as Limerick Person of the Year for 2018.

The conquering Limerick team and manager John Kiely won the overall award in a gala ceremony this Thursday in the Clayton Hotel.

Great scenes at Clayton Hotel as Limerick hurlers are named Limerick Persons of the Year 2018. Manager John Kielys says they are "humbled" by award. pic.twitter.com/PNuUkZgVcW

The team brought the Liam MacCarthy Cup back to the Treaty City and County for the first time in 45 years last year and a number of the victorious hurlers and John Kiely were at the awards to accept the honour.

Accepting the award on behalf of the hurling panel, manager John Kiely paid tribute to all the monthly winners: “Having listened to the stories of all the other award recipients, we’re humbled to even considered on the same page as these people. Their stories are just incredible, they’re powerful, they are inspiring, they are just ladened with courage and determination and they epitomise the people of Limerick in a very very unique way.”

“At the same time, I hope that our journey made their road and other people’s road a little bit easier this last year. To have been where we were last August and ended that phase of our history, I think, it’s a wonderful thing for us all and it opens up the door to an even brighter future.”

“On behalf of the team and the management I would like to thank you all for your support over the last number of years, it’s been incredible and inspiring for lots of young kids running around with hurleys in their hands.”

Vicky Phelan has been honoured with a Special Achievement Award at the Limerick Person of the Year 2018 awards. Mayor James Collins accepted the award on her behalf #Limerick pic.twitter.com/2zMAe7vzUL

Vicky, who unfortunately wasn’t able to attend the ceremony, was honoured for her work in uncovering the Cervical Check scandal and her tireless support of other women who have been affected and are fighting for justice.

Details of a new Limerick Hall of Fame which is being established were also announced at the gala ceremony, with the late Cranberries lead singer Dolores O’Riordan being the first inductee.

Very special moment here at the Limerick Person of the Year awards as rockstar Dolores O' Riordan is inducted in the Limerick Hall of Fame pic.twitter.com/QW9MNCZchR

“It’s a huge honour to be here for her induction into the Limerick Hall of Fame. Dolores was a very proud Limerick woman right to the end. Anyone who might have doubted that at any time need only to listen to any of her songs, you’ll hear that fine County Limerick accent, something her fans and music critics remarked upon.

“It’s a pity she wasn’t here last year to witness the Limerick Hurlers All-Ireland win. She was a huge hurling fan all her life, not many people realise that. She is with us in spirit and I’m sure she would be delighted with this induction and she’d be very proud with this.”

Now in its 18th year and sponsored by the Limerick Leader, Southern Marketing Design and Media and the Clayton Hotel and supported by Limerick City and County Council, the Limerick Person of the Year Award was set up to honour the achievements and success of local people.

Mayor of the City and County of Limerick Cllr James Collins said: “Congratulations to the Limerick Senior Hurlers and Vicky Phelan on receiving their awards today.

“In their own way they have helped to make Limerick a better place. The hurlers contributed to a summer to remember for all Limerick people. The way they conducted themselves on and off the pitch is a credit to all and the confidence they have shown mirrors the new found confidence and renaissance of Limerick.

“Vicky Phelan’s bravery has been incredible. From the first moment she spoke out about the Cervical Check issues to her support of other women, she has been an inspiration to all.

“I would also like to congratulate all the other monthly recipients for their hard work and dedication in promoting Limerick. You are doing extraordinary things and are making Limerick a much better place for everyone.”

Limerick Leader editor Eugene Phelan said the “12 nominees have, in various different ways, made a vast contribution to Limerick and its people in the past year, from the joy of the Limerick hurlers and Ladies Football team to the bravery of women like Vicky Phelan and Leona O'Callaghan.”

Pat Reddan, General Manager, Clayton Limerick Hotel said: “Clayton Hotel Limerick is honoured to be a sponsor of The Limerick Person of the Year Awards. It gives us the occasion to recognise extraordinary achievements by amazing, selfless individuals, living in the Limerick area, that seize the opportunity to make our county and country a better place.”

Congratulating all nominees, Dave O'Hora, Managing Director of Creative and Media Agency Southern said: “As a company we work with branding and creativity every day and these individuals and groups do incredibly creative things to add to the depth and meaning of brand Limerick, and we salute them for that.”