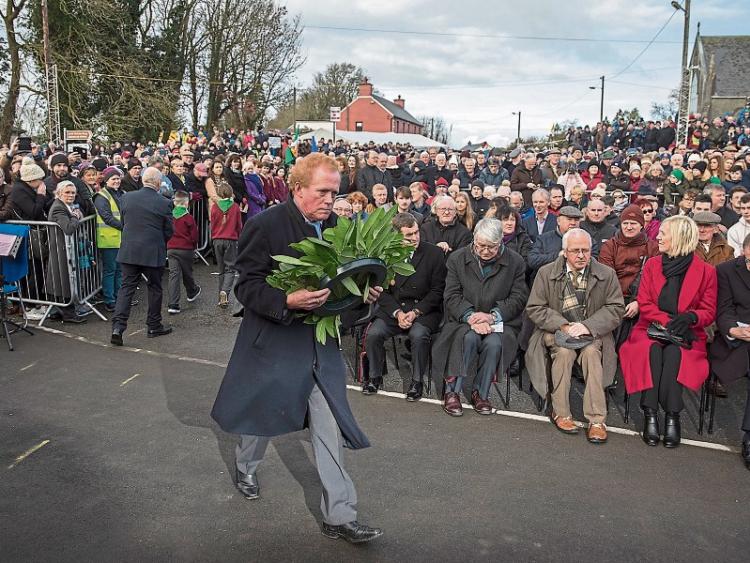 UP TO 2,000 attended moving and sensitively handled ceremonies on Sunday to commemorate the start of the War of Independence.

Large numbers travelled from County Limerick to Solohead, close to the county bounds. The Soloheadbeg Ambush happened two miles away from the Solohead memorial on a quiet country road. Two RIC officers died as a result of the ambush 100 years ago.

Wreaths were laid, an information board unveiled, a Mass said and a number of addresses to the large attendance. Minister for Culture, Heritage and the Gaeltacht, Josepha Madigan spoke on behalf of the government. Dr Martin Mansergh, guest of honour, unveiled the heritage information board while Deputy Éamon Ó Cuív gave the keynote oration.

PRO of the organising committee and MC, Tim Hanly said the aim of the commemoration was to honour the key contribution of the Third Tipperary Brigade in the struggle for Irish freedom whilst “being sensitive to the losses and sacrifices experienced on all sides in this conflict”.

“This theme was evident both at the earlier Mass and the subsequent commemoration ceremony where family descendants from all sides were present at the programme of events,” said Mr Hanly, who thanked every one for their help in organising the day, including neighbouring parishes in east Limerick.

The Solohead committee have already had contact with the Knocklong History Group to give advice and feedback on the challenges and opportunities presented by the Decade of Centenaries which now moves towards Limerick with the Limerick Soviet and the rescue of Sean Hogan at Knocklong Station in the coming months.

The Third Tipperary Brigade Old IRA Commemoration Committee hosted a separate event at the ambush site later in the afternoon.