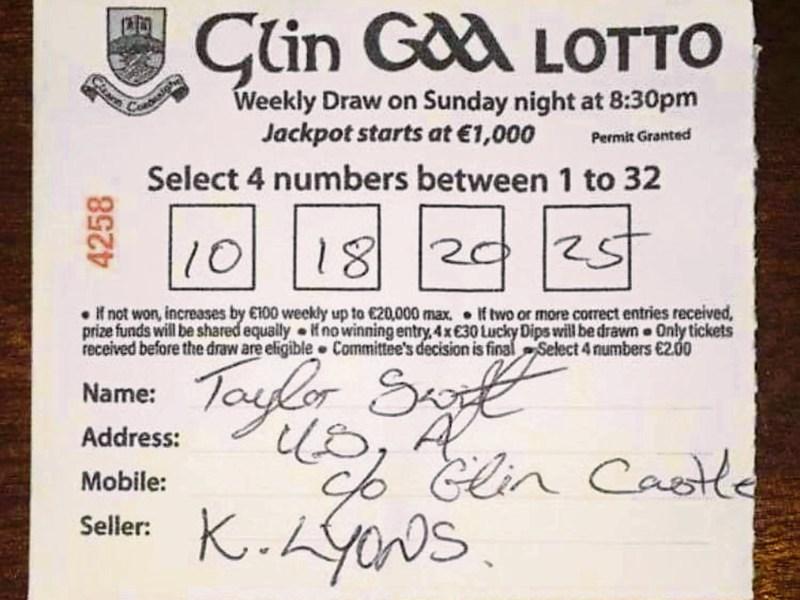 Swift lotto: Glin GAA is getting in on the Taylor hysteria

WHILE many lips were sealed amid Taylor Swift’s lavish Christmas holiday in Limerick, the GAA club in Glin has reacted in the most Irish way possible.

Taking to Twitter with a bit of tongue in cheek, Glin GAA club jokingly revealed a lottery ticket by the 10-time Grammy award winner.

The bigger joke is that Taylor didn’t even win the jackpot, which is now apparently at €5,400.

Glin GAA club said on Twitter, sharing a picture of the ticket: “Great to see @taylorswift13 support our GAA club on her recent holiday in Glin, Ireland. Thank you Taylor!”

Taylor Swift holidayed at Glin Castle over the Christmas period with her boyfriend, actor Joe Alywin, who is a friend of Dominic West, it is understood.

And despite the fact that many locals knew the 29-year-old superstar was there, “no one really bat an eyelid”, according to one.

It is reported that Ms Swift left Ireland via a private jet at Kerry Airport on St Stephen’s Day, though the airport could not comment on the matter.