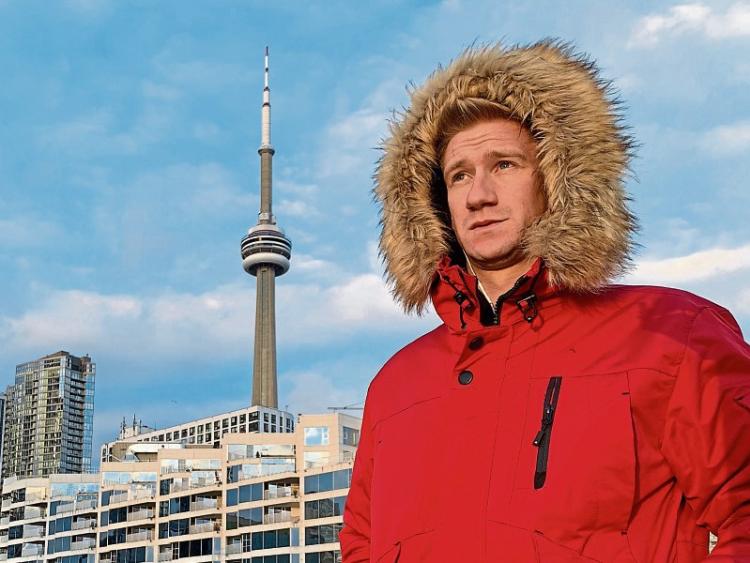 Dara’s 10 days of Christmas back home

LIMERICK city native Dara Fahy has spent much of the last four years travelling around the world having decided to step outside of his comfort zone in 2015.

In the intervening period, he has spent time in South America, Africa, Asia, New Zealand and most recently Toronto, Canada.

However, each and every year he has returned to Limerick to spend Christmas with family and friends and 2018 is no different.

“I arrive into Shannon at 8.15 on Christmas Eve morning. This time it’s not a surprise but the surprise was telling my family that I was actually coming,” he said.

“Family is where the heart is and on Christmas Day it's the one day of the year that you get to see everyone that you love.”

While this Christmas may be a bit different as his grandad, Micheal, died in August, Dara says he is still looking forward to the sense of togetherness and being surrounded by those most important to him.

“I couldn't imagine being anywhere else other then being at home in Limerick for Christmas. From arriving into Shannon on Christmas Eve to getting my hair cut by my regular barber, Brian Hackett and soaking up the atmosphere around the city and the Milk Market and bumping into people as you walk the street,” he told the Limerick Leader.

“Of course you can't top the turkey dinner on Christmas Day. Once I had decided I was coming home there is one thing that had to be booked –  Christmas is not Christmas without a trip the the panto at UCH no matter how big a child you are. The Christmas season will be topped off with New Year celebrations in the city with my LIT college friends,” he added.

After a hectic 10 days, Dara will say his goodbyes again as his global adventure is set to continue in 2019.

“They never get easier. It's going to be a busy but such and an enjoyable 10 days. Limerick will always be my home no matter where I am in the world,” he said.

LIMERICK artist Eric Duhan says Christmas in France will be “just another day but with extra cooking”, writes Donal O’Regan.

The 64-year-old from Wolfe Tone Street now resides in Avignon. It is a city in the country’s southeastern Provence region and is set on the Rhône. Eric has been living in France for 30 years,

“I will be up at 6am to do my early morning drawing and painting, prepare breakfast at 8am, watch the news and listen to some Christmas carols. As an old choir boy from Mount St Alphonsus I still love the carols. I will prepare lunch, put it in the oven, the usual stuff, I love cooking and it shows,” said Eric.

Next on his Christmas schedule is a walk into the city centre and a coffee in the square facing the Palais des Papes [an historic palace]. I will get fresh bread and a chocolate cake before walking slowly back home,” he said.

A bottle of sparkling wine will be opened and enjoyed on the terrace.

“Even if it's a bit chilly, we have blue skies.”

Christmas lunch consists of roast potatoes, vegetables and chapon [rooster] with homemade stuffing and more bubbly to wash it all down. Eric turns Spanish for the afternoon and enjoys a siesta.

“Then Skype the tribe in Ireland and my two girls who will be spending Christmas in Brittany.

“The evening will consist of some plum pudding and custard, tea and then a film or two.

“You can take the man from Ireland but you can't take Ireland from the man.”

‘You can’t beat Christmas at home’

However, using computer technology, he will be in contact with his extended family back home on Shannonside.

“You can’t beat Christmas at home, especially when your parents and your home place is still around. The sense of camaraderie, closeness, warmth of the range, the decorations, meeting the neighbours at Mass, the idea of walking outdoors in the evening and see the stars in the sky – it’s just not something you see in London,” he says.

Danny has not been in Limerick at Christmas time for a long number of years, having lived in London for over four decades.

But he has fond memories of his youth spent in the county.

“Helping my father with the farm work which at that time was about attending to jobs you didn’t have time for during spring and summer – like cutting the ditches and mending fences. And then of course watching my mother getting ready for Christmas Day – for example choosing the turkey that had been fattening up for the big day, tidying up the houses, putting up the decorations, making sure our parents knew what we wanted for Christmas,” he said.

One of Danny’s fondest memories, he recalls was hunting the wren on St Stephen’s Day, painting their faces, and wearing strange costumes travelling from house to house making “various kind of sounds”.

This Christmas, Danny is looking forward to reconnecting with his family back home, and the Maher contingent who live in Britain.

“We are all so busy with life that it is great to have some free time out to actually connect and have a good chat with the relations,” he says.

While he enjoys Christmas in London, nothing beats home, Danny adds.

“Christmas in London is nice of course, but being at home, you get the sense that it is less commercialised or at least we have more space and time to consider family and friends and not just the rush of Christmas as it is so often is here in London,” he concludes.

Helena’s heading home for the holidays

LIMERICK city native Helena Enright has been living in the southwest of the United Kingdom. Each and every year, Helena makes the journey home to Woodlawn Park in Limerick, and this year will be no different. A true testament to family values, Helana explains how even though she lives in another country, her family remain as tightly knit as ever.

“I come home every year for Christmas. I see my family quite regularly as my two sisters also live in the UK so Mum and Dad pop over quite regularly. My brother still lives in Limerick so we can all catch up,” said Helena.

This year, the 43-year-old will make the journey home on Christmas Eve. She explained what her Christmas at home will look like.

“I am flying into Dublin Airport. There will be no one to collect or meet, it will just be the coach down the M7 in time for Christmas Eve Mass at Sarsfield Barracks. My Dad is Branch Treasurer of the O.N.E. and sings in the choir on Christmas Eve, so it has become a bit of a tradition,” said Helena.

“Dinner this year, as it always is, will be at my parent’s house in Woodlawn. My sister and her husband will be home from London and my brother and his family will also come for dinner. We will be missing one sister this year and she is due her first baby over Christmas and will be still in the UK.,” she added.

Christmas isn’t just an important time for family, it is a time to catch up with friends. Something she plans to do when she returns on Christmas Eve.

“I am really looking forward to catching up with some friends I haven’t seen in a while,“ she said.

Helena has been living in Bristol for the last two years. She is a senior lecturer in Drama at Bath Spa University since 2014.

ORIGINALLY from O’Connell Avenue, Wayne O’Connell is currently living and working in Seoul, South Korea, where he has been teaching English for almost two years, writes Jess Casey.

“I’m actively not taking part in Christmas this year so I’m going to spend the winter vacation recovering until the New Year celebrations,” Wayne explains.

“Christmas in South Korea isn’t the huge religious holiday it is in the west. It’s mostly for couples, with things like romantic dinners or matching outfits. There aren’t really any decorations around besides those giant trees in areas with a lot of tourists.”

“In a lot of ways, it’s completely different here from Limerick. It would be hard to forget that Christmas was coming up in Ireland, but it’s possible here.”

“The thing I miss the most is family. It’s difficult being away during the holidays but it isn’t feasible to visit because of the short vacation time and the financial side of it.”