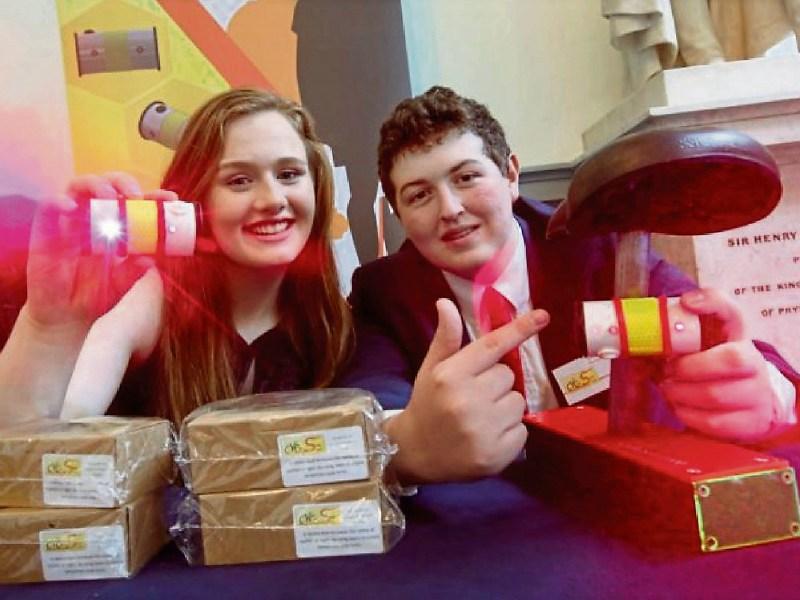 AN innovative duo from Desmond College, Newcastle West  may well have come up with the best answer yet to safety for cyclists.

Now their contribution has been recognised and their  CycleSafe 2000 device has won  the Future Award in the Road Safety Authority’s 2018 Leading Lights in Road Safety award scheme.

Breda Magner and Evan Condon, both fifth year students at the school,  were presented with their award by Road Safety Authority (RSA) chairperson Liz O’Donnell at Croke Park last Thursday.

“It was a great honour,” Evan Condon said after the ceremony.

But the clever pair are no strangers to winning. Earlier this year, CycleSafe 2000 won the Best Innovation Award at the national finals of the Foróige Young Entrepreneur of the Year competition.

The impetus for a new and effective safety device for cyclists came originally from Breda Magner, the daughter of Conor and Louise Magner from Coolanoran, Ardagh.

“I am a keen cyclist and I live on a main road,” she explained. Her outside-the-box thinking was that if  cyclists could make their own cycle lane, on roads with no cycle lanes, it would be much safer.

The outcome was a battery-operated device which projects two, red laser-beam lines onto the road in its wake, creating its own, defined and movable, cycle lane which vehicle drivers can see and steer clear of.

It operates, Breda explained, both day and night but is brighter at night. The components of the device are easy to get, Breda continued, but assembling them is quite complex.

“When she told me about it, I was very happy to get involved,” said Evan Condon, the 16-year-old son of Michael and Mairead Condon from the Cork Rd who became the fledglng company’s financial manager.

So far, sales of their device have exceeded €1,500 and the innovative device is patent pending.

“We received over a hundred nominations across the Leading Lights awards categories this year,” Moyagh Murdock, chief executive of the RSA said:  The quality of the submissions was excellent, making it a very difficult job for the independent judges to select a winner in each category It is great to hear about the special projects and initiatives that are being carried out around the country to promote road safety.”

RSA chairperson Liz O’Donnell thanked the winners “for their incredible and inspiring work and efforts” to make our roads and communities  safer for everyone. “Each year, these awards allow us to recognise those who are doing their utmost to keep our local communities safe and educate others on the importance of road safety,” she said.