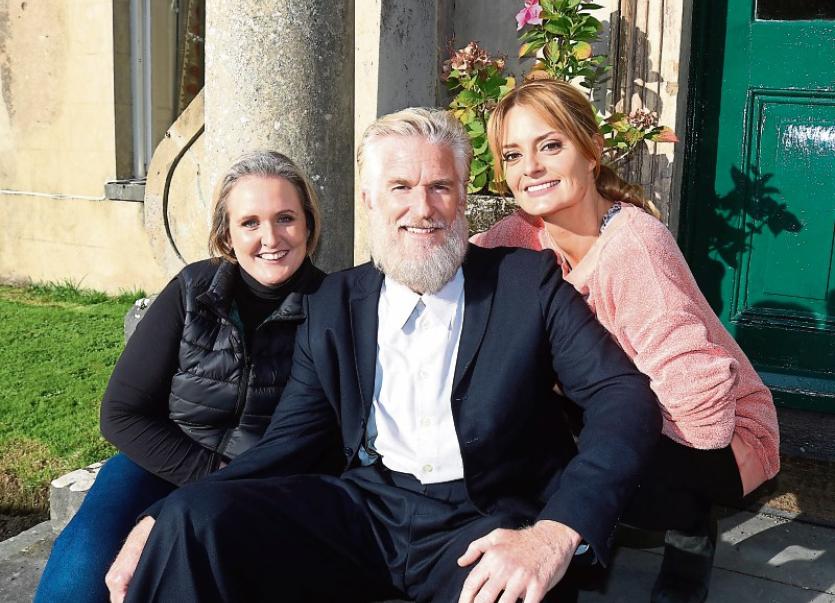 THROUGH the sunlit doorway of the palatial Thornfield House in Ahane in County Limerick walks a tall, debonair man with a smile beaming across his face.

The air is calm on the grounds of the large country house, and so is the aura that emanates from this high-profile actor who has been shooting in Limerick in recent weeks.

New Yorker Matthew Modine, donning a silver beard and a black-and-white two-piece suit, stoops down on the limestone steps of this Georgian edifice to chat to the Limerick Leader.

Had the pleasure of having a very insightful and tranquil chat with @MatthewModine during his break while shooting The Martini Shot in Ahane, Co Limerick. An absolute gentleman. See @Limerick_Leader for full interview this Thursday. Pic by Michael Cowhey pic.twitter.com/kzRtye2QlL

The bona fide Hollywood star is taking a break from filming a new feature film, called The Martini Shot, which is mainly being shot around Limerick and is slated for a release in 2019.

The drama, which has a touch of black comedy, tells the story of a dying film director Steve - performed by Modine - who wants to shoot one last film before his death. And what starts off as a normal project, the protagonist’s final film eventually becomes an existential exploration of life and death.

Matthew, 59, has been in Limerick for close to a month now, and his experience has been one of warm welcomes. In fact, “magical” is the  word he uses to describe his stay.

Among a younger audience, he is better known for his role as Papa or Dr Martin Brenner in the Netflix series Stranger Things. For the older generation, Matthew is Private Joker in Stanley Kubrick’s classic Full Metal Jacket.

As we sit on the steps to start our conversation about The Martini Shot and “magical” Limerick, Matthew points to the ground.

“Oh, look, there’s an old Roman coin there,” he says, pointing at a barely-decipherable, weathered one cent coin. “It’s just a penny? Ah. You have it, you picked it up, all the day you will have good luck. Luck of the Irish.”

It is an understatement to say that Limerick has celebrated Matthew’s arrival. The famous actor made time for plenty of awestruck fans at the Milk Market and he has embraced this warm welcome and his surroundings while also tweeting about his stay and his encounters along the way. He says he is fascinated by the River Shannon, having walked the three bridges every morning since landing in these parts.

“It is as pretty a city when the sun is setting as any of those famous cities around the world—this beautiful little city of Limerick. And the thing that makes it especially beautiful is that you’re surrounded by Irish people, who are a unique breed. You really are. There’s a jolliness, forgiving nature, a sense of optimism that exists in Irish people that is certainly unlike the British. The Irish have a different sense of humour.”

This isn’t the first time Matthew has worked in Ireland, but it is first time he has filmed outside Dublin.

“I had a sense of what Ireland was, but I didn’t have a sense of what this side of the country was like. Especially a writer, when you sit down to write something, to create something and say: ‘Ireland, it’s the land of magic.’ You can’t go film in Toronto and pretend it’s Ireland. In addition to the locations, we have had access to such wonderful actors,” Matthew explains, as the crew is half Canadian, half Irish.

The acclaimed actor adds: “It’s a magical film and I am glad that I am filming it on this magical, emerald island.”

When asked how Steve’s character is portrayed, an introspective Matthew replies in his unique, Zen way: “It’s like that song, what if God was one of us, a slob like one of us?”

Steve, nearing close to his death, believes that he is no more than a mere thread in the universe’s fabric.

“A painter with a billion colours at his disposal. Aren’t we all that? Don’t we all have that potential to be great creators? It doesn’t have to be something that’s artistic; it can be something that as beautiful as a tractor or a baker who wakes up and makes a bunch of croissants,” explains Matthew whimsically.

“There’s beauty and there’s art in the things that we do in the active creation, especially when we put our love and our passion in it, and that other people get the opportunity to appreciate it. I think that’s what’s really beautiful about the script. Is that all of us are artists, all of us have the potential to be great creators.”

Coincidentally, Thornfield House is the family home of Sean Flynn, the location manager on the feature film.

He says it’s “great to be able to showcase the Mid-West region. We have some beautiful locations, we have the facilities and amenities to get productions done and we have got great cast and crew around”.