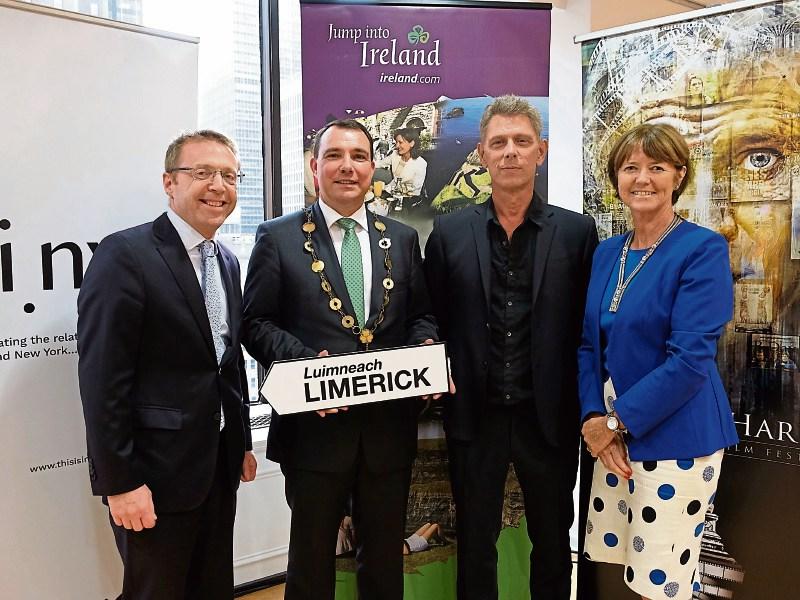 TWO Limerick festivals have received a global launch in New York as part of a new initiative designed to encourage people with Irish roots, and those who simply enjoy Irish culture, to come home and celebrate what it means to be Irish.

Mayor of Limerick James Collins was in New York last week to attend the launch of the Global Irish Festival Series, an event organised by Tourism Ireland in partnership with the Consulate General of Ireland.

The Festival Series is a joint initiative between the Department of Foreign Affairs and Trade and Fáilte Ireland and will be piloted in Limerick and Donegal this October, with the Richard Harris International Film festival and I.NY receiving funding for events here.

The Department has allocated €210,000 in funding to four festivals and events, with the returning I.NY festival, which runs from October 7-14 and the Richard Harris International Film Festival, which takes place from October 25-29, funded here.

With some 34 million Americans claiming Irish heritage, the Global Irish Festival Series was launched in New York by singer Lisa Hannigan in a bid to tap into the Diaspora there and worldwide and to “motivate them to reconnect by visiting their home county,” according to Ciara Sugrue, Fáilte Ireland’s Head of Festivals.

Mayor Collins said: “During the entire month, Limerick will be en fête with a huge entertainment programme from I.NY and the Richard Harris Film Festival as we extend an invitation to friends and family from Limerick, Ireland and around the world to come and join us.”

Details of I.NY, which explores the breadth and depth of the connection between Ireland and New York and which welcomed Jane Sanders, wife of president candidate Bernie to Limerick last year, are to be unveiled in the coming days.

The Richard Harris festival, which welcomed actor Jamie Harris - son of the late Richard - to the launch in New York, returns for a sixth year and, in the words of festival director Zeb Moore, “continues to grow”.

“We are the only festival to have a live script read of a feature in development and a black-tie awards night,” he said, noting that the full programme would be announced later this month.

“This year the festival goes back to the golden age of Hollywood and opens with a gala screening of Constance Smith – Hollywood Tragedy and on Saturday, Cass Warner presents The Brothers Warner about the beginnings of Warner Brothers studios,” he revealed.

Festival chair Rob Gill announced that the festival will be extended to seven days in 2019, in order to showcase more emerging film-makers.

And in 2019, the festival will establish a new TV drama writers' room to "bring writers of all backgrounds and experience from all around the world to Limerick to write the next great long-form drama series in a US writers’ room style environment and residency".

The writers’ room will be part of a new media conference – iMET (Interactive Media & Entertainment Technology) summit, in association with Emerald Giant Productions. This summit will explore technological disruption in the audio-visual and entertainment sectors, including theatrical film, TV, gaming and also sports production.

For more on the Global Irish Festival Series, see here.