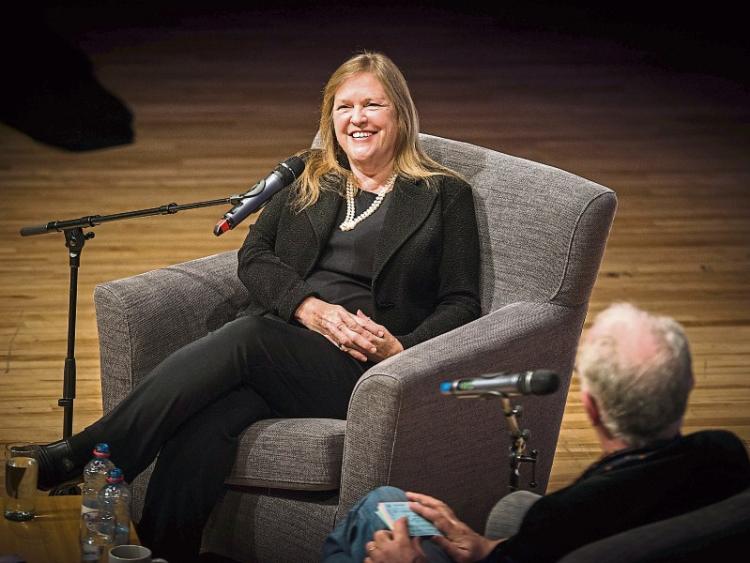 DR Jane O’Meara Sanders, the wife and senior advisor to former US Presidential Democratic candidate Senator Bernie Sanders said her husband may consider running again in the next US presidential election.

Dr Sanders was in conversation in the University Concert Hall with Professor Joseph O’Connor, the author and holder of the Frank McCourt chair in creative writing at UL. She said she would not run herself to become president, and would not to be drawn further on other candidates she would like to see running to become to 46th President of the US in 2021.

She said her “heart goes out” to defeated candidate Hillary Clinton.

“We saw her at President Trump’s inaugural, which was difficult for all of us. I mean it was a hard loss to win the popular vote and lose the electoral college vote to someone who honestly we all felt had to be stopped.”

She added that she and many others believed that the incumbent was “someone we felt would be a very bad fit for the nation.”

From the outset, she and her husband believed that “this is not like any other election” and said that had the belief that “whether you like her [Clinton] or not you have to support her for the country.”

“Secretary Clinton has been vilified since she was First Lady of Arkansas; virtually nothing has stuck. But the cloud has stuck, unfortunately and unfairly. I got a little bit of that during the presidential campaign, but a pittance compared to what she has endured.”

She said she wasn’t “wild” about her husband’s decision to run for the presidency, but said she would support him in whatever he chose to do.

“We used to talk about how every Senator gets up in the morning, looks in the mirror and sees the next president. He never had any interest in that.

“But it was very frustrating to be in Congress and see the incremental changes, but people weren’t moving. He felt the best he could do to focus on the issues would be to run for president or have somebody else take that mantle and run, and nobody else was doing it.

Speaking about her husband’s campaign, she said: “It’s not enough to defeat your opponents – you have to destroy them. We don’t do that, have never and will never do that type of campaign.”

Of Irish heritage, she said she had an “idyllic upbringing” in Brooklyn, at a time when pictures of President John F. Kennedy were often hung alongside the Sacred Heart in many Irish-American homes.

Prof O’Connor queried what he should say to his students who wonder why they should “waste” their time caring about real issues when “what electoral politics delivers to you is Donald Trump in America, and Brexit in the UK, and little ugly nationalisms everywhere else.”

“They don’t have the option to throw up their hands in despair, there’s too much at stake,” she replied.