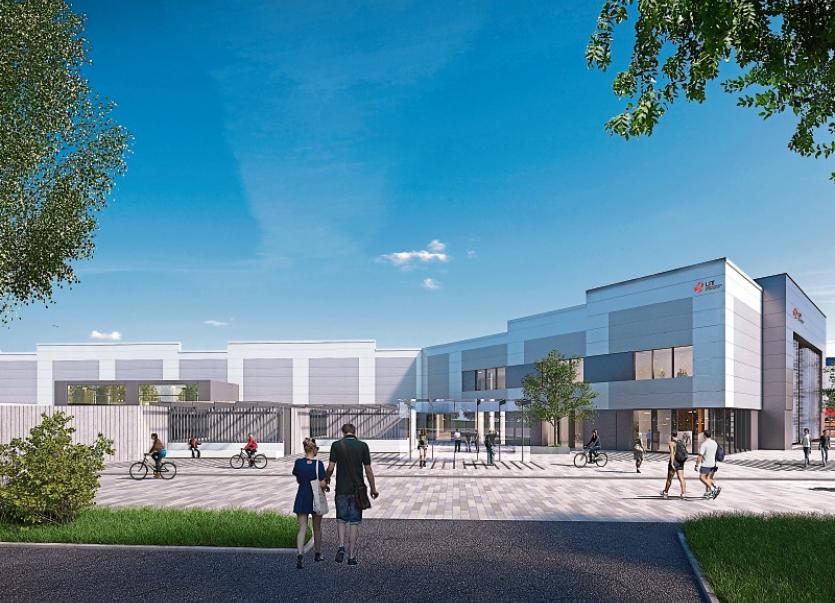 A design of the entrance area to LIT's new Coonagh campus, construction work on which has already started

The development, which is expected to create around 100 permanent jobs and 134 construction jobs, will see the Moylish-based IT open a new engineering-focused campus beside Tesco at Coonagh Cross, with the first students expected a year from now.

LIT said that construction was underway and that Minister for Education and Skills Richard Bruton had this Friday confirmed that funding of just over €11.6 million has been provided to deliver phase one of the project.

The first phase of construction has already begun on the brownfield site on the north side of the city and comprises the full fit out of more than 5,000 square metres of previously unused space with state of the art teaching, learning and research facilities.

This will provide for an additional 542 places on LIT’s engineering courses, an expansion which is considered essential to support industry demand in the region, LIT said.

LIT President, Professor Vincent Cunnane described the new campus as a “critical piece of infrastructure not just for LIT but for Limerick and the Mid-West region.

“At LIT we are working closely with local industry to ensure Coonagh will also be the first port of call for business leaders and companies seeking out graduates with specific skill sets, up-skilling employees, and assisting with research that will ensure this region remains at the forefront of mechanical and electrical engineering development for decades to come.

“Ultimately LIT’s campus at Coonagh will provide the research and educational support to the industry that much of the region’s economic growth is predicated on, while strengthening LIT’s role as an economic generator at the heart of Ireland’s fastest-growing regional economy,” said Prof Cunnane.

“The development of this new campus is a community effort led by staff and local stakeholders, and would not have been possible without their input and the support of the Higher Education Authority and Department of Education,” he continued.

“I would also like to acknowledge the work of our local Oireachtas representatives and previous local ministers on getting this substantial project to this stage. It is important too to recognise Minister for Education, Richard Bruton for his continued interest and support, and the commitment of Minister for Higher Education, Mary Mitchell O’Connor,” he added.

“The campus at Coonagh will provide exemplary state of the art education and research space and I am looking forward to its doors opening in time for the next academic year.”