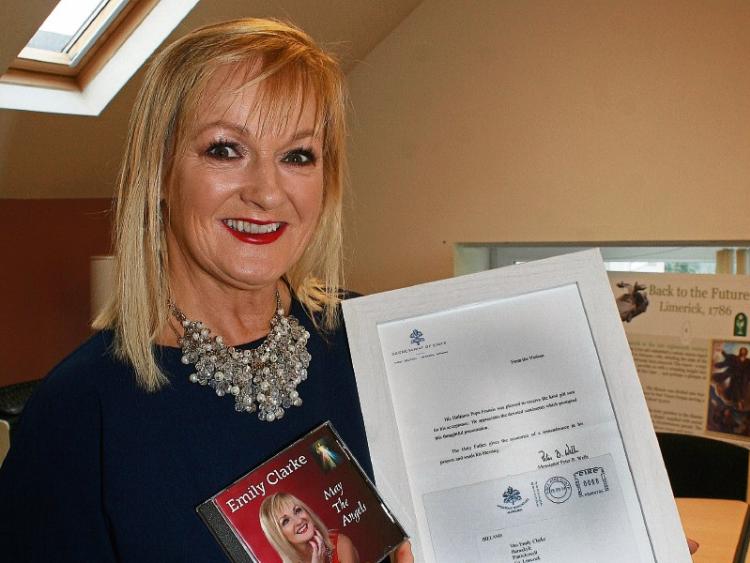 Emily Clarke with her CD and letter from the Vatican

THE LIMERICK singer who wrote a song for Pope Francis has said that she is disappointed that the papal concert is such a male-dominated affair.

Emily Clarke, from Crecora, wrote the song ‘Papa Francis’ several years ago, as she was so inspired by the new Argentinian pontiff.

She sent the CD to the Vatican, and received a response from one of Pope Francis’ cardinals, acknowledging receipt of the gift.

She led a campaign for Pope Francis to come to Limerick, and also publicly aired that she wished to sing for the pope when he visits Ireland.

While there are women performing for the pontiff, none of the event’s ‘headline’ stars are women. Andrea Bocelli, Nathan Carter and Daniel O’Donnell are the most high-profile, and most-publicised performers to sing.

Women who have been reported as performing for the pope include Celine Byrne, Dana Masters, Bridgie and Missy Collins and Moya Brennan. Riverdance will also put on a show.

Speaking to the Limerick Leader, singer Emily questioned the process for choosing singers. She had previously aired her views on Liveline, during a debate about the selection process for performers.

“I am disappointed that more women didn’t seem to be involved in it. From my own point of view, mine was the only song for Pope Francis, up until recently,” she said.

“The pope was aware of my song, and had acknowledged it when I got a letter back. Because of that, I was very disappointed.

“I don’t know why I wouldn’t have been considered. I was quite proud of it and it was very well received. I don’t know what was the criteria to qualify.

“My song was written long long before there was ever mention of a papal visit or the World Meeting of Families coming to Ireland. It was written for the right reasons, from the heart, to acknowledge the pope.”

One or two songs have emerged in the last couple of weeks ahead of the pope’s visit.

But the singer said she is gracious in defeat, instead wondering why more women will not perform as a ‘headline’ act.

“I will get over it, I wish them all the very best of luck during the special weekend. I have tickets to go up to the Phoenix Park,” she said.

There was controversy when it was announced that Nathan Carter will perform the REM hit Everybody Hurts, a version of which famously went viral when performed by Fr Ray Kelly, the Irish priest who went on to become a semi-finalist on Britain’s Got Talent.

Last week, the priest called on the organisers of the World Meeting of Families to explain the song selection process for the papal celebrations. Despite his success on television, the priest was not chosen to sing for the pope either.

Ms Clarke said: “I do want to thank all of the Limerick people and the people around the country who backed my campaign. I would do it all again, the support I received was incredible. I loved it. I wish the pope all the very best and I hope he gets the Céad Míle Fáilte to Ireland.”

The council also formally invited the pope to Limerick on foot of her campaigning.