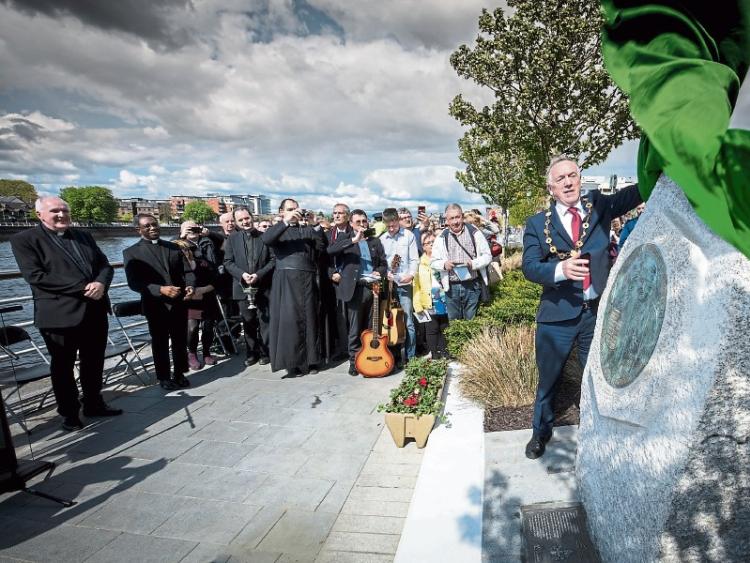 THE PEOPLE of Limerick who have yearned for another papal visit have been politely told by the Vatican: “Sorry, not this time.”

This was confirmed by the Papal Nuncio to Ireland Archbishop Jude Thaddeus Okolo, who unveiled a €10,000 memorial plaque dedicated to Pope St John Paul II at Bishop’s Quay this Monday.

The late pope visited Limerick on October 1, 1979 and was subsequently made a Freeman of Limerick City by Mayor Bobby Byrne.

The plaque, designed by Limerick artist and sculptor Cliodhna Cussen, was approved of in 2014 and it is understood that the cost of the memorial was split between Limerick City and County Council and the Limerick Diocese.

Mayor of Limerick City and County, Cllr Stephen Keary said it was “an honour” to unveil the plaque.

Speaking on the four-year wait for the launch, he told reporters: “Sure, everything has to come to fruition. It just happens to be now and we are delighted to be able to do that.”

Archbishop Okolo said he was “delighted that a great man is being remembered” in Limerick.

He added that Pope Francis is aware that he was invited to Limerick.

“He knows that he was invited or that he’s invited. But unfortunately, he cannot come. Because we know that he wants to concentrate on the World Meeting of Families. He wants to meet everyone there at that meeting. We leave the future open. If he cannot come, maybe another pope will come.

“But what I will say is this: one pope has come and he represents all the other popes,” he told reporters.

Bishop Leahy said he thinks Pope St John Paul II “would be pleased that we are launching this memorial” ahead of Pope Francis’ visit to Dublin.