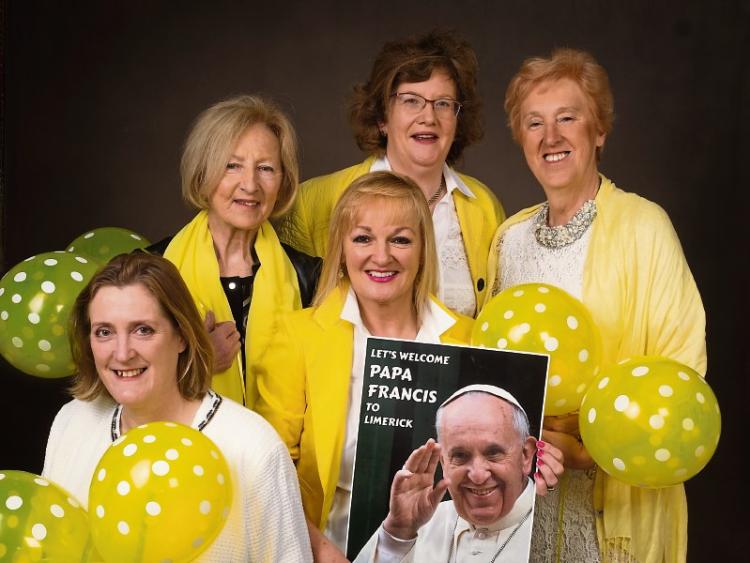 SOME of Limerick’s most well-known women have come out in support of a campaign to bring Pope Francis to the Treaty City during his trip to Ireland next year.

A visit from the pontiff could uplift the city in more ways than one, they argue. According to the campaign spearheaded by local woman Emily Clarke, an economic boost to the entire region, as well as the chance to promote Limerick on a global scale are some of the benefits we can look forward to.

Not to mention the spiritual impact a papal visit would have on Limerick’s faithful denizens.

“Since starting this campaign back in 2014, when I sent my song ‘Papa Francis’ to the Vatican with an invitation to come to Limerick, I have been blown away with the build-up of excitement and enthusiasm and support for the prospect of a papal visit to Limerick,” said Ms Clarke, from Crecora.

Celia Holman Lee and Senator Maria Byrne are the latest Limerick people to back the bid, along with prominent businesswoman Mary Fitzgerald of Adare’s Woodlands Hotel, former councillor Mary Jackman and Helen O’Donnell, chair of both the Limerick City Business Association and the board of management at Crescent College Comprehensive.

Senator Byrne said she had “many fond memories” of the last papal visit to Limerick.

“My father Bobby, as Mayor of Limerick, welcomed Pope John Paul II to Limerick Racecourse, South Circular Road to present his holiness with the Freedom of the City of Limerick,” said the politician.

“I understand Pope Francis is expected to visit Dublin and an area in the North of Ireland,” she said.

“ I believe Limerick is an ideal place to encompass the rest of the Ireland and has the facilities to enable such a visit by His Holiness,” she added.

Hotelier Mrs Fitzgerald also recalled the last papal visit, saying that another one would be a huge boost to those in her industry.

“I’m old enough to remember the impact of the visit of Pope John Paul to Limerick in 1979. I had only recently started my bed and breakfast business, and it was full with visitors, from south Kerry and beyond,” she said.

Talks of getting the leader of the Roman Catholic church to come to this side of the country have also reached the council chamber.

Members of Limerick City and County Council supported a motion to invite the pope to Limerick, and a council spokesperson confirmed that a letter will be sent in the near future.

“Last November, following a similar request from councillors, Limerick City and County Council wrote to the Office of the Apolostic Nuncio in Ireland,” said the spokesperson.

Ms Clarke, Mayor Stephen Keary and a number of other local representatives are due to meet the bishop to discuss coming together to issue a formal invitation.