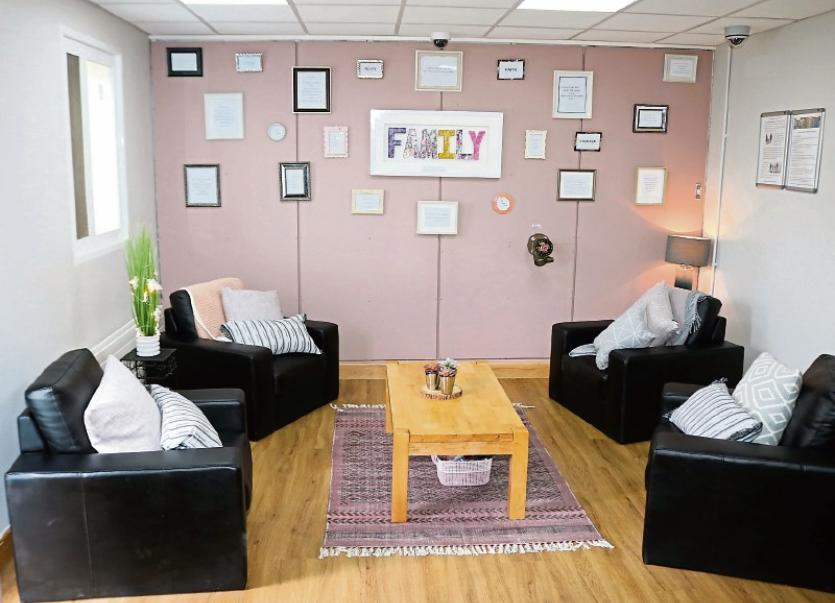 The newly-renovated ‘sitting room’ has been unveiled at Limerick Prison | Picture: Adrian Butler

A NEW family room has been unveiled at Limerick Prison in an effort to create a more homely environment for children visiting their incarcerated parents.

The newly-renovated ‘sitting room’ was shown for first time, as three new artworks created by the Limerick City Build were put on display at the front of the prison on Mulgrave Street.

A pilot programme with the Irish Human Rights and Equality Commission and the prison has been focusing on giving female prisoners a voice, according to Human Rights Commissioner Teresa Blake.

“Maintaining family relationships is essential to them,” she added.

According to the Bedford Row Family Project, a  Limerick City based voluntary group, imprisonment of a family member has a significant impact on those left outside, especially children.

“This pilot project, looking at the women’s voice here, has also been looking at how we can better conditions,” Ms Blake added.

“This sitting room is very important as it will give the women here a room in which they can spend time with their children in a normalised setting,” she explained.

“It’s a homely room, without a clinical feeling.”

Limerick Prison has made a significant effort in enhancing its premises on Mulgrave Street, according to Governor Mark Kennedy.

While the programme to enhance the building started eight years ago, an influx of visitors when the prison’s ‘Tree of Life’ water fountain froze during Storm Emma acted as a catalyst for the project, Governor Kennedy explained.

Pictures of extreme icicles formed on the fountain during the snow-storm went viral in March and the prison saw a massive influx of visitors to the site, he added.

“We’ve seen great renovations on William Street and Mulgrave Street and we decided to enhance the space.”

“We removed the razor wire along the front of the prison and we’ve taken steps to transform what was a grey, stern building,” he said.

Three pieces of art created by the Limerick City Build, a social enterprise initiative, have also been installed on the grounds.

This includes a sculpture called ‘The Space Between’, a renovation to the prison’s original Governor’s door created using wood from railway sleepers and a steel bench called ‘Kathedra.’

“It’s an intricate, beautiful piece that would stand anywhere in the world.” The three new pieces of art will also be lit with spotlights at night, he added.