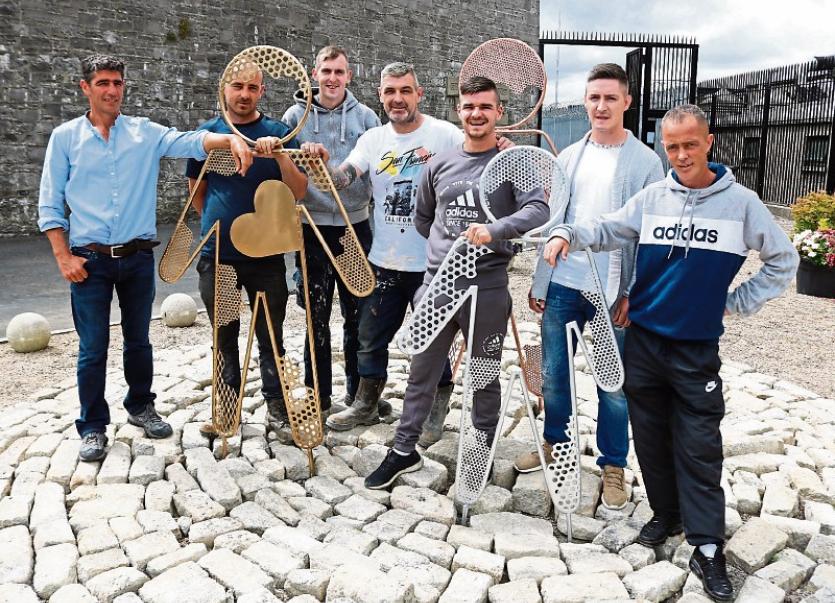 In front of the 'The Space Between' piece they worked on are Martin Quinn, Kevin Fitzgerald, William Fitzgerald, Jeff Lee, Andrew Power, Ger Lynch and Peter McNamara | Picture: Adrian Butler

THE Irish Human Rights and Equality Commission has highly praised Limerick Prison for its focus on protecting human rights at the unveiling a “profound” new artwork on the prison grounds.

Human Rights Commissioner Teresa Blake was speaking at the unveiling of ‘The Space Between’, a sculpture created by Limerick City Build, in the foregrounds of the prison on Mulgrave Street.

Featuring three different outlines of a man, woman and child, ‘The Space Between’ is representative of fathers, mothers and children, and looking at the care of a family as a whole unit within Limerick Prison.

The piece was also unveiled ahead of the World Meeting of Families in August.

“This representation created by the Limerick City Build artists says so much, so much more than any of us could say,” Ms Blake said.

“It’s an emotional piece that represents what goes missing when a person comes to prison.”

“This is a fantastic statement about family that really links with the Prison Service core values,” she added.

“While a person is deprived of their civil liberty, it is still important that their human rights prevail.”

“The Irish Prison Service, and Limerick Prison, has set their core values in line with human rights,” she added.

“I’m phenomenally honoured to have been involved in the project.”

‘The Space Between’ was unveiled along with two other new pieces of artwork in the foreground of the prison created by Limerick City Build.

This includes ‘Kathedra’ a steel bench and a revamp to the door of the original prison governor’s quarters, including a door created with wood from railway sleepers.

A newly decorated family room was also unveiled on the day. It has been redesigned to make the area more homily for children visiting their parents.

Mayor of Limerick City and County James Collins speaking at the unveiling described the piece as “thought-provoking.”