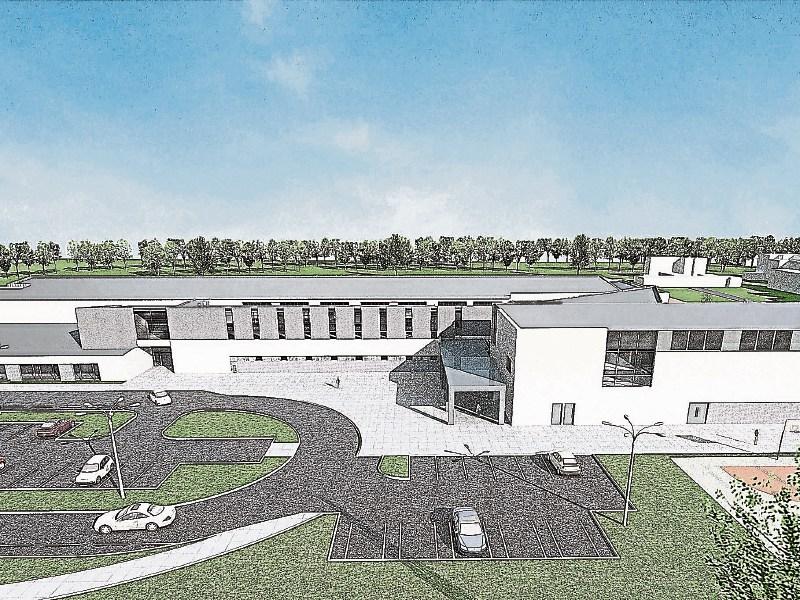 An impression of the new school at Skagh, Croom

A CONTRACTOR has been appointed to build the new long-awaited secondary school campus in Croom.

The contract for the new €20m Coláiste Chiaráin school, which is under the patronage of the Limerick and Clare Education and Training Board (LCETB) was awarded to Cork-based firm MMD Construction this Wednesday afternoon.

The timeline for the school’s construction had been threatened when the contractor which was due to be appointed, Sammon Group, went into examinership as a result of the collapse of Carillion in the UK.

And there were fears that the school, which is already much behind on its original aspirational opening date of September 2018, would be delayed even further by the contracts saga.

Limerick and Clare Education and Training Board announced that it is “delighted to announce the appointment of a main contractor to construct the new Coláiste Chiaráin on a greenfield site” in Croom.

“I would like to thank all those involved; staff, students and their parents, members of the Board of Management, local public representatives and the local community for their commitment and perseverance in ensuring that the project would be brought to fruition,” he added.

MMD has a wide range of experience and expertise in many types of construction projects, including schools.

The new school development on the 22 acre (8.9 hectares) site at Skagh, Croom, consists of a two-storey building of almost 10,000m², incorporating over 60 teaching spaces, which will facilitate delivery of the widest-possible curriculum.

The development of pitches and external play areas on the site together with a full-sized PE Hall will provide for a diverse range of extra-curricular activities. In addition, the inclusion as part of the project of a Special Education Needs Unit will ensure that the educational needs of the entire school community are met.

The value of the building project will be between €15 and €20 million, according to the LCETB, and “will greatly enhance the social and economic infrastructure of Croom and the surrounding area”.

A sod-turning ceremony is due to take place in the next fortnight, after which the construction will begin.

Minister of State in the Department of Finance, Patrick O’Donovan TD, welcomed the news of this “massive investment for Croom”.

“This has been in the pipeline for a long time, it has been dogged with problems, but both myself and Cllr Stephen Keary have been working with the education and training board and the Minister in the Department of Education for a number of months, and at this stage years, to make sure that this school has gotten the green light,” said the County Limerick TD.

“I’m delighted that MMD has been appointed today and I look forward to the sod-turning and construction commencing in the next couple of weeks. It has been a long saga, and there has been an awful lot of disappointment, but the important thing is that the Department of Education, the Minister and the ETB have stuck with this throughout all of the difficulties that have been there, to try and get it over the line, and now finally, construction is about to start.”

Local FG TD Tom Neville also welcomed the news, saying that he has been working on this since he was a councillor in 2014. “It’s been a long process that has faced delays along the process, especially earlier this year. Now we want to try and drive this on as quickly as possible,” he said.

FF TD Niall Collins, who has previously called on the Minister for Education to visit Croom to see the school's 'sub-standard' conditions, said the news is a 'huge relief'.

“News that a contract has been awarded to MMD Contractors to build this long overdue new school building will come as a huge relief to pupils, parents, staff and the local community.

“Hopefully the proposed completion date of October 2019 will be met without any further delays or surprises,” added Deputy Collins.