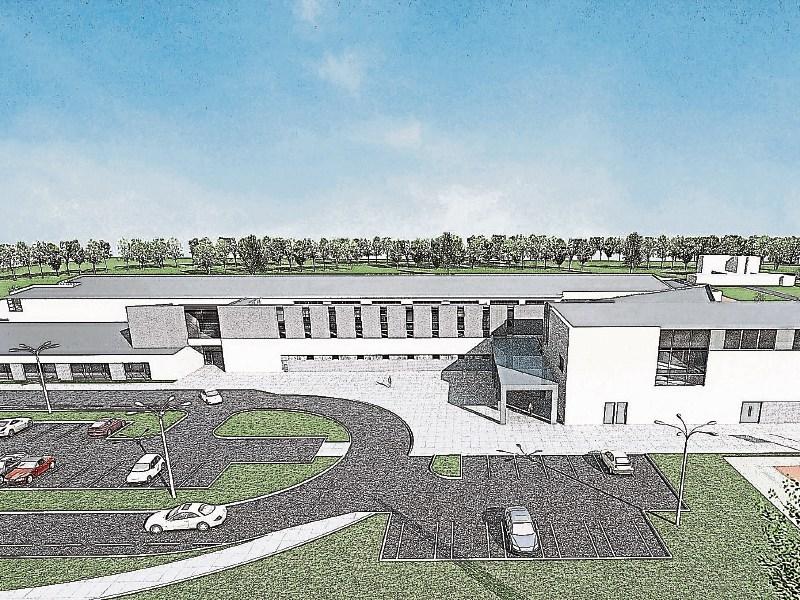 An architect's impression of the new school building, which will be at Skagh, Croom

THE LIMERICK and Clare Education and Training Board has excluded the embattled contractor Sammon from the tender process for the new Coláiste Chiaráin building, after it went into examinership last month.

The Sammon Group was on course to win the tender to build the €20m Croom school, but the major construction company slipped into financial difficulty as a result of the collapse of Carillion in the UK.

Minister for Education and Skills, Richard Bruton, confirmed that Sammon did not withdraw itself from the tender competition. But the LCETB has now excluded the contractor, he said.

The response came after a Parliamentary Question by Limerick County TD, Niall Collins (FF), in which he asked if the contractor had withdrawn.

“The contractor in question has not withdrawn from the tender competition for the project to which the deputy refers,” said Minister Richard Bruton.

“However, the local education and training board, to whom the project has been devolved for delivery, has excluded the contractor from the competition and has now moved on to evaluating the tender from the next lowest bidder,” he confirmed.

The long-awaited school building, which will replace Coláiste Chiaráin’s current structure, faced its latest setback when the contractor went into examinership.

And because the company was technically still trading, the LCETB had their hands tied, when it came to removing them from the tender process.

But the news came before Sammon had officially been awarded the tender, and now the LCETB have proceeded to examine the next lowest tender.

Sammon Group was forced into examinership following the collapse of the major UK building company Carillion. Sammon was owed very significant funds, running into the millions, by British Carillion, with which it had a Public Private Partnership.

The High Court has appointed Grant Thornton as interim examiner to Sammon in April.

It was hoped that work would have begun on the site at Skagh, Croom, by now, but the process has been delayed by several weeks, at the very least.

In April, Niall Collins said that “if refugees had to attend a centre that was in the state of disrepair that Coláiste Chiaráin Croom is in, there’d be a public outcry”.

He added that it’s “just completely unacceptable in this day and age” that a school has to exist in such conditions.

“What really bugs people now is the pace of progress, which has been painstaking. This is just yet another setback. What could possibly go wrong is going wrong, at every step of the process,” he added, pledging to keep pressure on the Department of Education until the project comes to fruition.