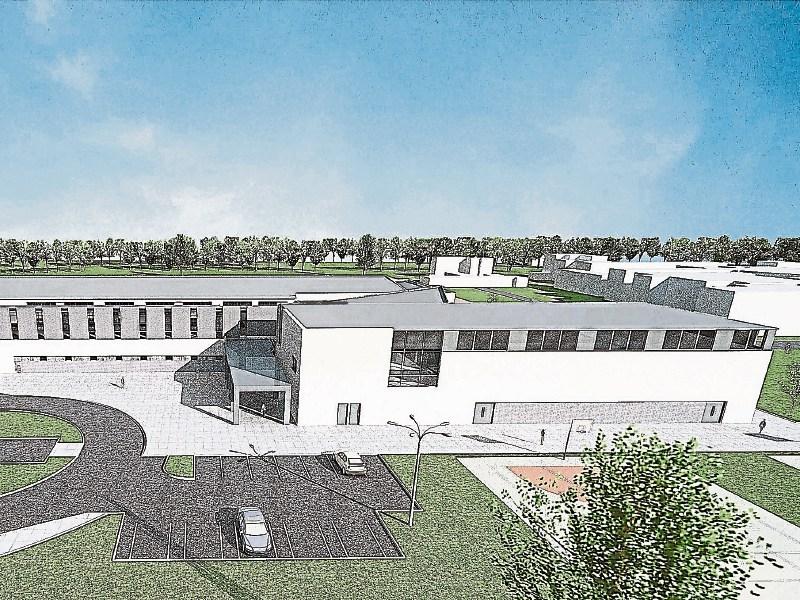 An artists impression of how the new school might look

The Minister for Education and Skills has been invited to visit Colaiste Chiarain in Croom which has been described as “sub-standard” in the Dail.

Deputy Niall Collins made his comments this Tuesday evening after he raised concerns about the delay in progressing the building of a new school building.

The Limerick TD said the new building, which was granted planning permission more than 12 months ago, is badly needed as the current building is “sub-standard to put it mildly”.

Deputy Collins said there are concerns locally that the project may not be progressed at all following the appointment of an examiner to the Sammon Group which, it’s understood, was in line to be awarded the contract to build the new school on a greenfield site on the outskirts of the village.

“It has been said that the next move is to ask that company to remove themselves from the process to allow your department and the ETP (Education and Training Board) to engage with whoever is next in line in terms of the tender process and this is the crux of it,” said Deputy Collins.

In reply to Deputy Collins, Minister Richard Bruton said he could not comment on the tender process as it is “commercially confidential”.

However, he inisted the department remains committed to the project and that he anticipates a contract for construction of the new school will be awarded in the coming weeks.

“In the event that any company in an examinership is a bidder in this project that would, of course, be taken into account under the legal procedures that apply,” he said.

“The matter of who is involved, who is successfull and what procedures will occur is commericaly confidential,” he added.