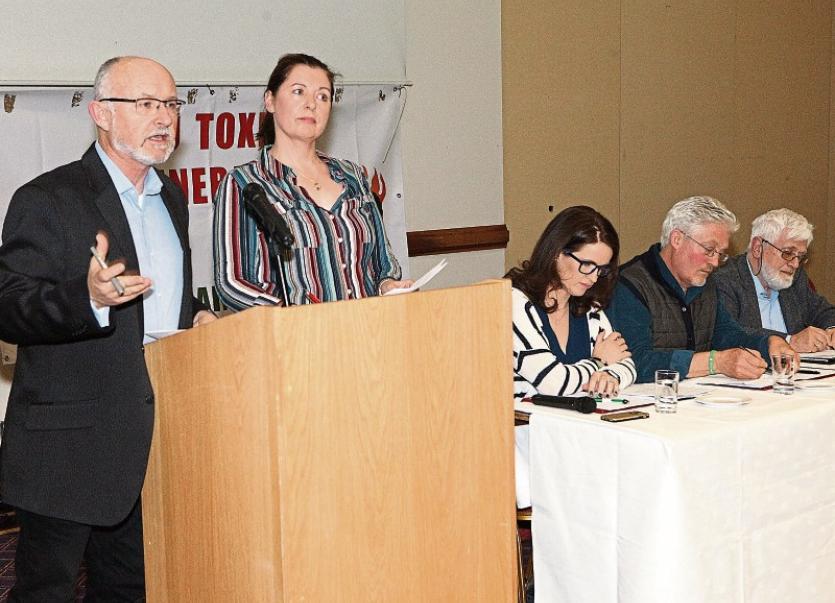 THE main opposition lobby to Irish Cement’s controversial plans for Mungret has decided against challenging An Bord Pleanala’s ruling to grant the firm permission.

Limerick Against Pollution (LAP) had been considering seeking a judicial review against the national appeals body’s decision to grant permission to Irish Cement to facilitate, store and handle waste materials and used tyres at its plant here.

But at the first meeting organised by the group since An Bord Pleanala delivered its verdict, Claire Keating, who chaired the event, confirmed: “We have sought legal advice on it, and have been advised by our lawyers that it’s not worth pursuing. The avenue we need to take now is the Environmental Protection Agency (EPA). That’s what we’re going to do. There is also an issue of cost. It would cost €100,000 – and we’d need this in our bank account immediately to take this case to the High Court.”

Irish Cement is seeking to phase out the use of fossil fuels and instead use tyres and solid recovered waste in production of the building material.

The €10m reforms have attracted huge opposition, with 300 people returning to the South Court Hotel this Friday, the same venue which hosted a four day oral hearing into the proposals.

Although An Bord Pleanala has waved through Irish Cement’s plans to build in Mungret, the EPA is still deliberating on awarding the firm a licence to operate. Without this, the company's plans are unlikely to proceed.

Ms Keating said LAP will take the fight here instead.

“We’re delighted [with the turnout]. People have reacted as they are horrified and shocked at the decision. They never thought it would happen. The people of Limerick have woken up to this catastrophe, and they have realised we all have to come together and try and stop this,” she said.

While residents are concerned about potential negative impacts on the local environment should Irish Cement be given the green light by the EPA, the firm has long insisted that its proposals will not result in an increase in emissions to the local environment, due to the fact the burning will take place at such a high temperature.

At this Friday evening’s meeting, Ms Keating also confirmed LAP had assigned environmental consultant Jack O’Sullivan to prepare a submission to the EPA ahead of its deadline of May 15.

Speaking from the floor, Fianna Fail councillor James Collins said: “I urge all the citizens of Limerick and the Mid-West to make their voices heard through the EPA, to raise their objection, and for the EPA to show some leadership and rejet this variation on the grounds of public health. It’s not what Limerick is about. Limerick is not an old industrial city anymore. Limerick is clean, it’s green, it’s high-tech, it’s fin tech, it’s digital. This decision is driving Limerick backwards.”

Sinn Fein councillor Malachy McCreesh added: “Seeing the crowds tonight it just shows how many people are concerned. We can defeat this thing in Limerick – we have to defeat this.”

A march is also being planned ahead of the EPA’s decision – in a similar vein to when LAP marched in March 2017.

In response to a query from the Limerick Leader about the meeting, an Irish Cement spokesperson said that "the fossil fuel replacement programme at the Mungret plant, approved by An Bord Pleanála, will reduce the company’s dependence on imported fossil fuels, will reduce CO2 emissions by up to 40,000 tonnes per year, and will help recover valuable resources. It will also make the factory more competitive, and support existing and future employment.

"The Mungret factory is the only cement factory in Ireland totally dependent on imported fossil fuels and one of the last in Europe not to be availing of alternative fuels. Replacing fossil fuels in cement factories is standard practice throughout Europe, and decades of experience demonstrate that using these fuels in cement kilns does not lead to increased emissions.